This music might not be everyone’s cup of tea (and not sure if if other of its type would entice me either) but I have really dug this track for years!

(It’s certainly got the complex layering that I love so much in music, especially where each layer is brought in one at a time, then played in various overlapping ways, then stripped back down to the simplest bit at the tail end of the song…)

Was talking with someone about envy recently… ontologically it’s quite the interesting emotion, and one that I’m sure pretty much all of us feel to some degree at various times throughout our lives.  But in musing about it, I realized that there might be several nuances and additional layers that I hadn’t really considered before.  I call them Envy Envy, Due Envy, and Shame Envy.

(As a quick aside, it’s important to note that, though they’re often used interchangeably, there is also a distinction between Envy and Jealousy.  Briefly, Envy is about really wanting something someone else has, whether possessions, attributes, status, or whatever.  Jealousy is to feel insecure or protective of something you already have, or to feel threatened or to worry that someone will take something you already have.)

Envy Envy is the garden variety of envy, that longing for something that someone else, such that we ache within.  A little envy can be motivating, since it can push us to get off our duffs and go out to get that thing.  But a strong amount of envy, or being envious of and pursuing something improper (including something that won’t get us what we actually want) can be quite deleterious.

The next two take this common Envy and add something that doubles down on the deleteriousness.

Due Envy layers on a sense of entitlement.  It says “Not only am do I want and covet that thing you have, but I deserve it and I ain’t getting it.”  It’s envy coupled with a feeling of insult and of being thwarted.

Shame Envy, while similar to Due Envy, twists its layer towards a sense of, well, shame.  Not so much shame for feeling the envy, but more along the lines of “Not only do I want and covet the thing you have, but I should have it by now and I’m bad and wrong and failing for not having it yet.”

And it’s very much possible to have all three Envys at the same time!  Envy Envy is already present in Due and Shame envy, but since Due and Shame envy share that same fantasy of expectation and entitlement, when the discomfort of shame sets in, Due Envy lashes out to try and discharge the pain.

The key here is to recognize that it’s the expectation and the fantasy that’s at the root and that needs the transformational attention.  Because without addressing that not only does their deleterious impacts continue but it’s unlikely to be able to wrangle the base Envy Envy back into that productive zone. 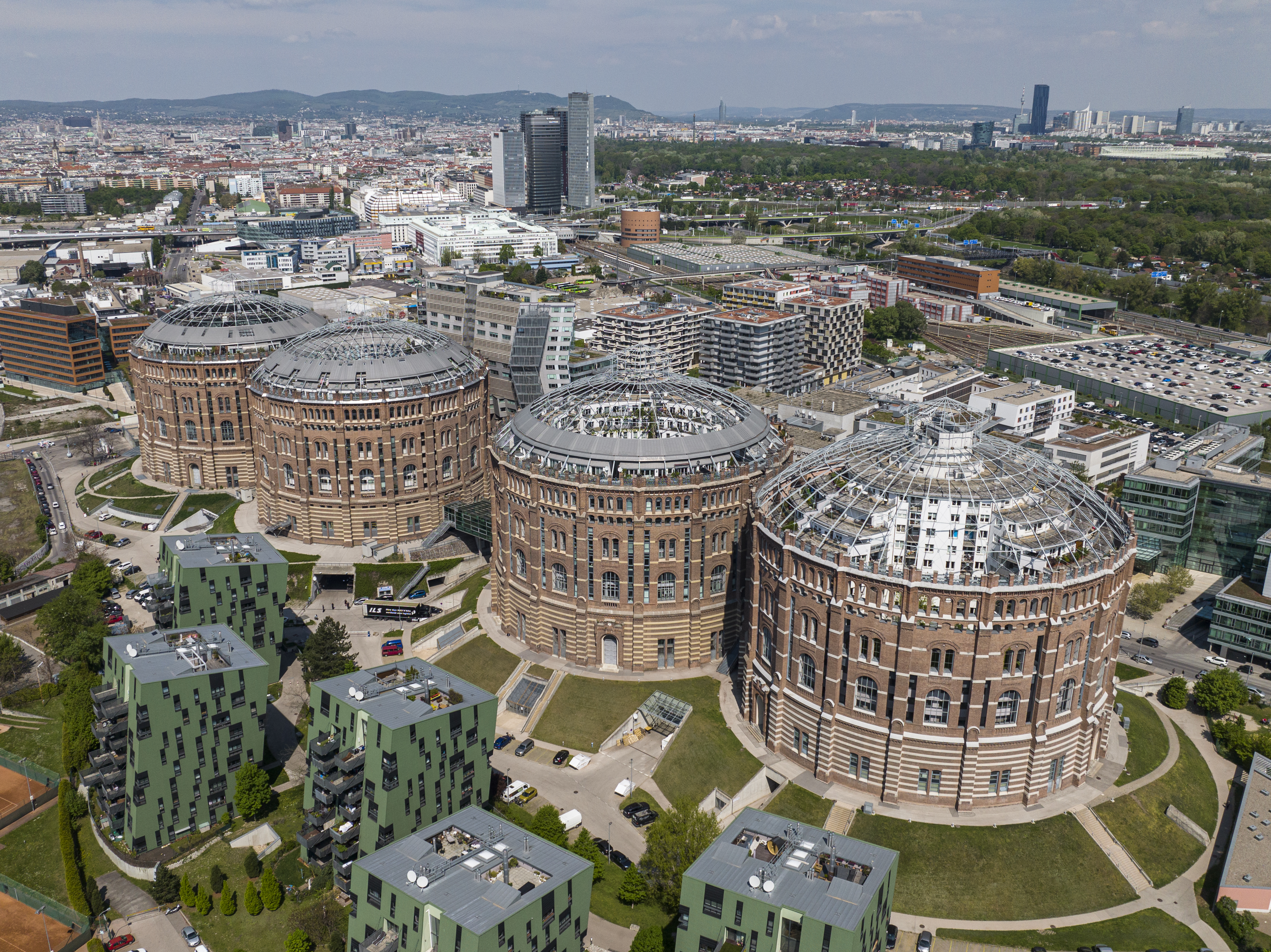 These large buildings were built just before 1900, able to hold 12 million cubic feet (360 thousand cubic meters) of coal gas.  Perhaps needless to say, coal gas isn’t in use anymore, so what to do with their ornate and richly detailed brick-ness? 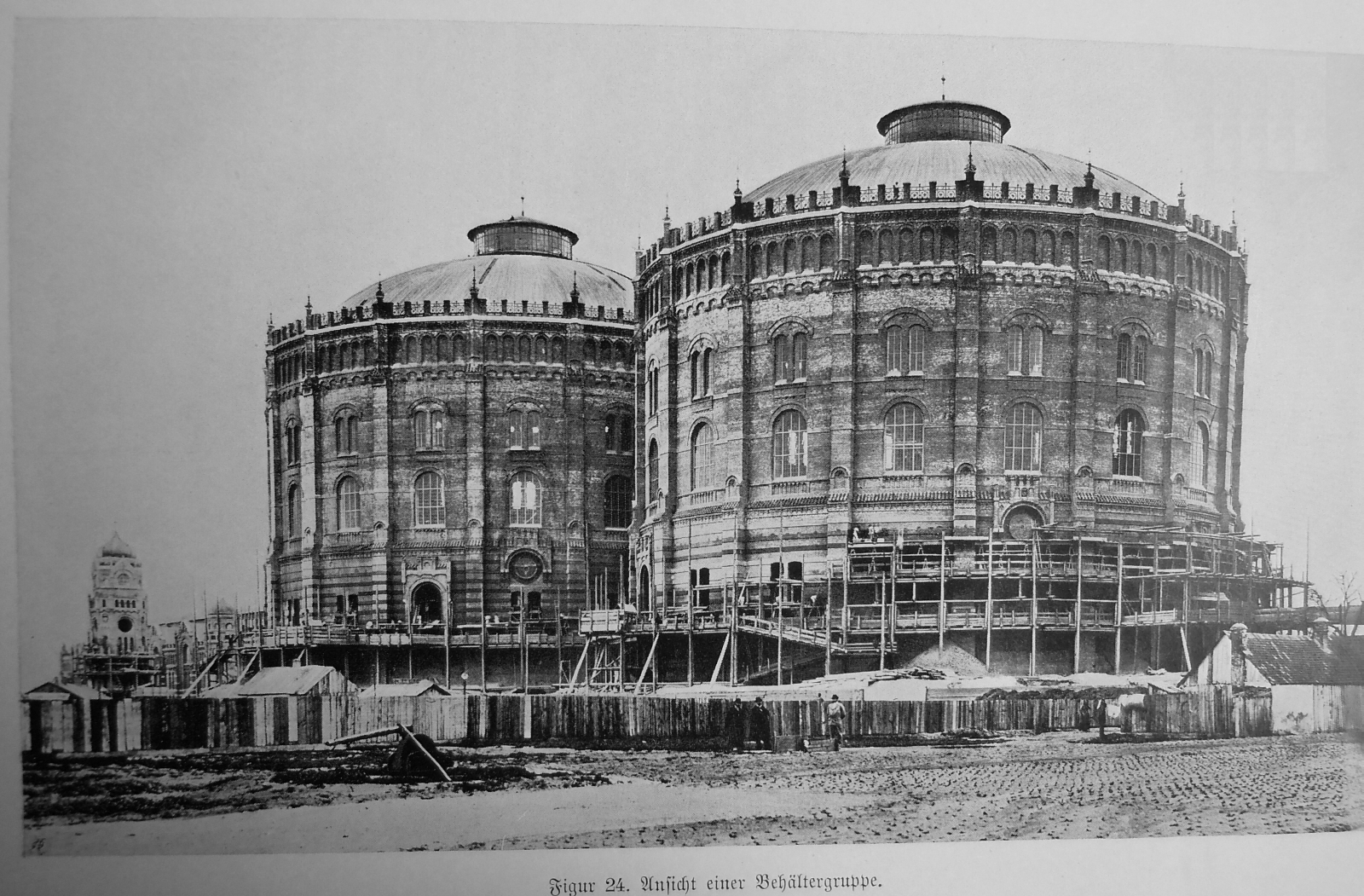 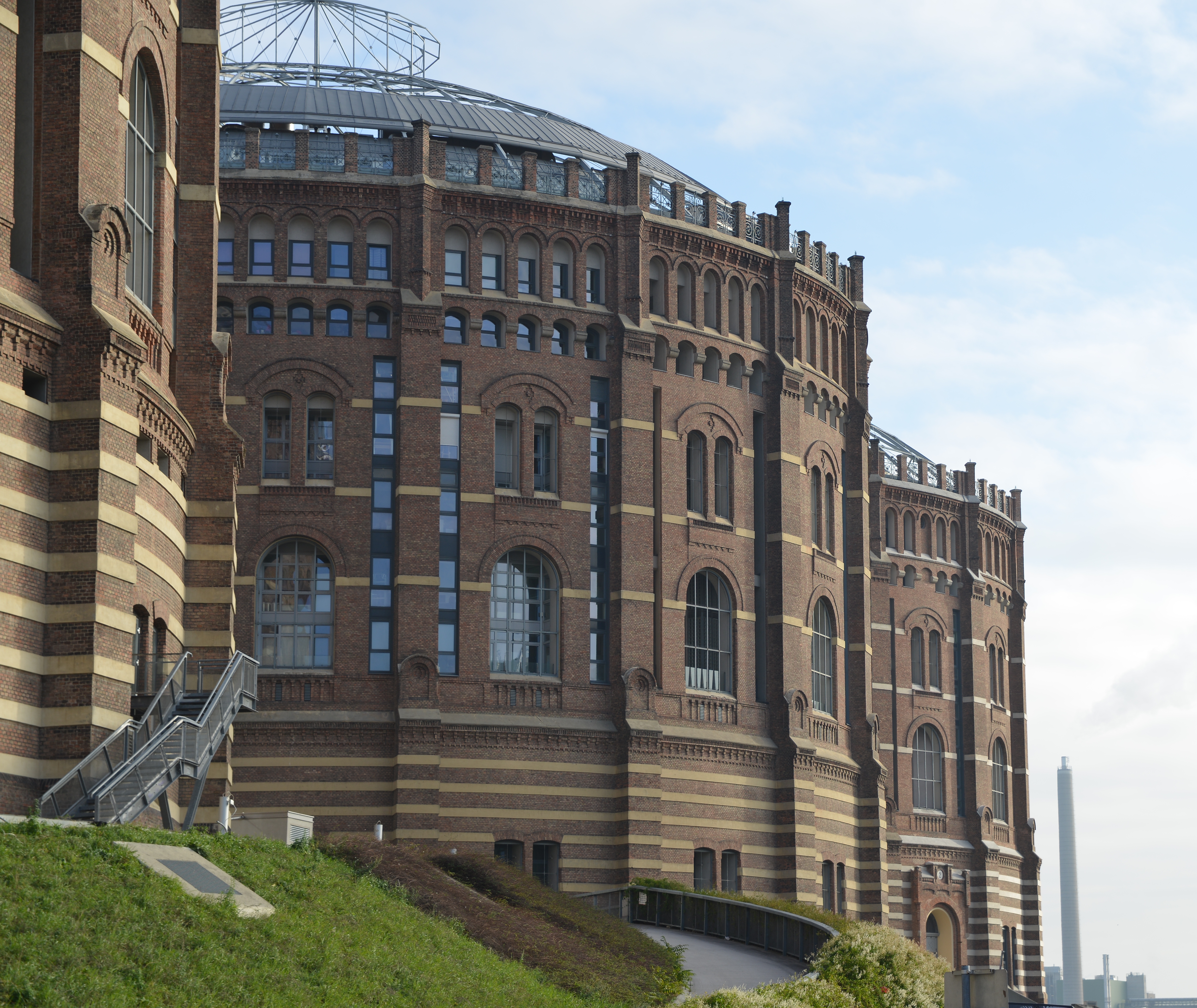 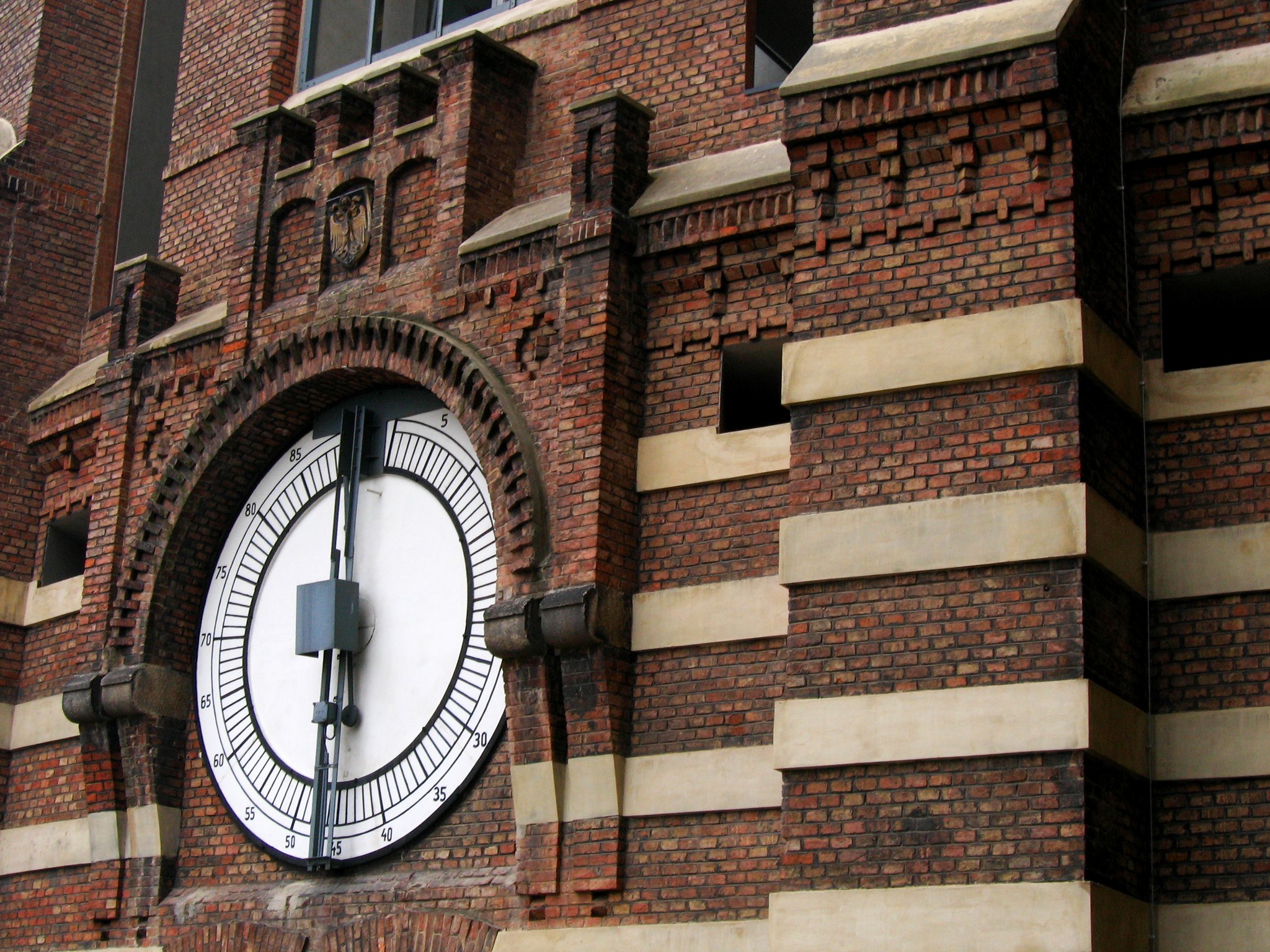 Can we just pause here for a moment and admire that ornateness?  These are, after all, “only” industrial and utilitarian structures.  But it was understood that these were civic buildings, and that our surroundings influence our experience and quality of life.  So it wasn’t a stretch to ensure that such prominent hunks would be worthy of those who had to view them and as such given a well designed exterior. 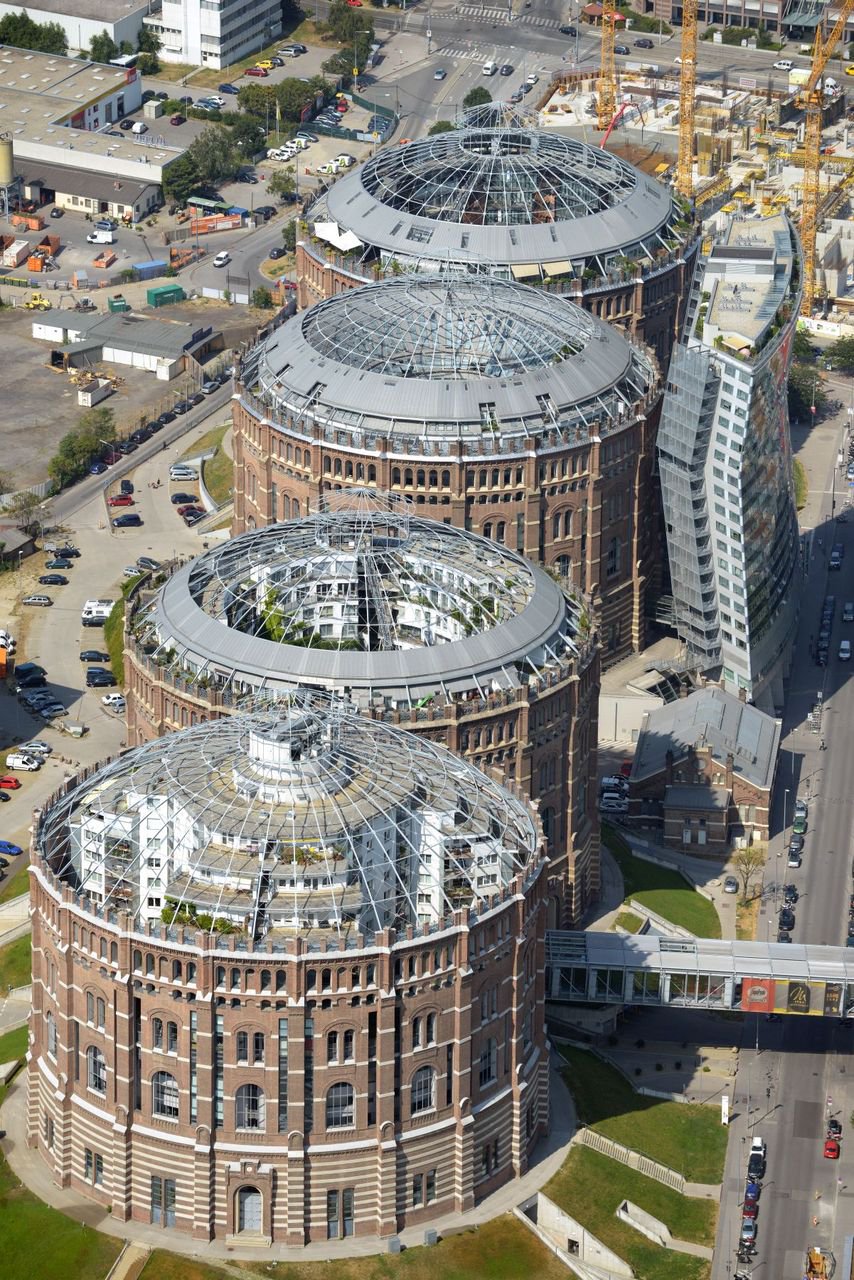 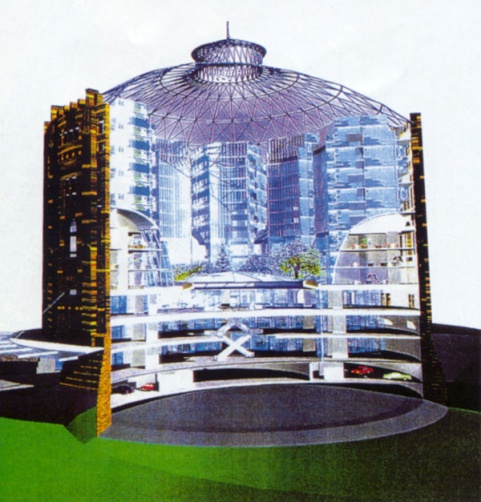 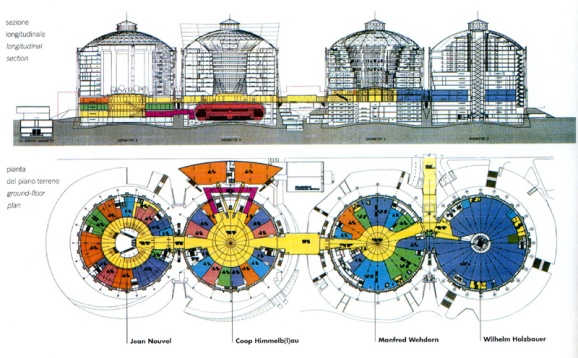 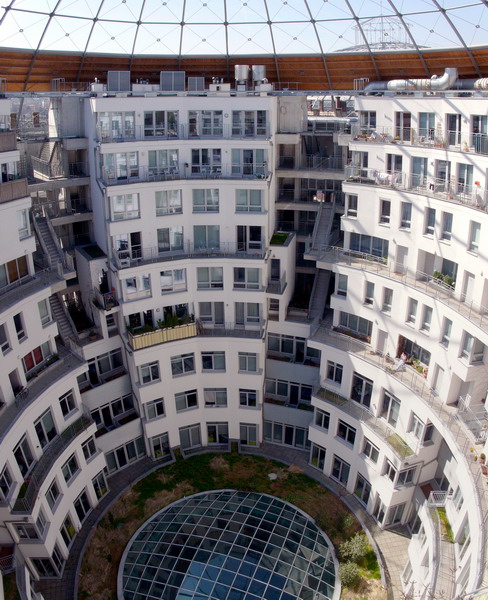 Returning to that question, it’s likely no surprise (if you’ve seen anything I’ve posted here before) that the answer is one of adaptive reuse.  Much like the Battersea Power Station, these four gasometers have been re-imagined into a mixed use neighbourhood.  The domed steel structures were transformed into giant atriums for new construction that rings along the exterior, acting like a giant indoor garden for the new units.  Each building was redone by a different architect, and as such each has a different design within.  It’s as cool as it sounds. 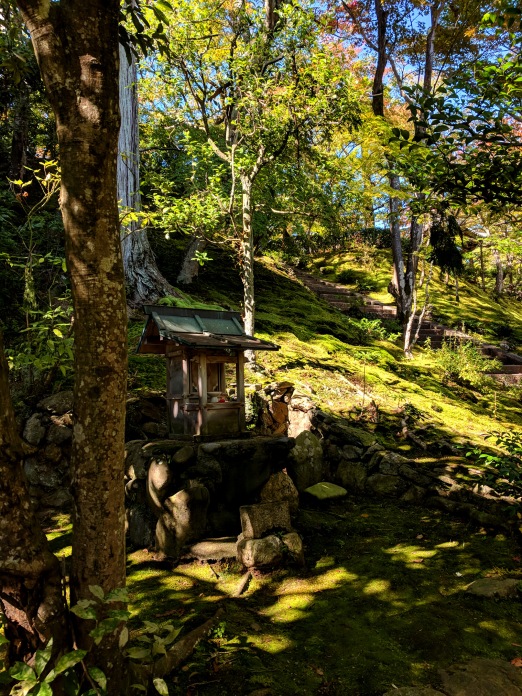 There’s that phrase, “couldn’t see the forest for the trees,” which is really kind of a clever description of someone who’s either only considering a small part of a situation and/or who are so focused on the details that they completely miss and don’t appreciate the larger situation and context.  But at the same time, we have the phrase, “stuck in their ivory tower,” or perhaps, “their heads are in the clouds,” which relates to someone who is only seeing things from a thousand meters and are so focused on the ‘big picture’ of the thing that they are completely separated from the facts and requirements and the nuances of the situation and context.

Which points to a spectrum, doesn’t it?  And, even more so, of the value of traveling along that spectrum.

One of the great things I feel fortunate to have learned in becoming an architect is that skill of being able to zoom out and see the whole of the thing, including the form, the environment, the context(s), their interactions, and the possible impacts… and then (have to) zoom all the way into the specific detail of how that piece of wall will connect to the floor.  And everything in between, including function and circulation, codes and safety, space and experience, and etc.  It’s a constant shifting of scales, and a constant game of remembering that what you change at one scale will have an effect and impact the others (and therefore might require changes or adjustment there).

The spectral game is to remain present and mindful of both scales, at the same time.  To see both the forest and the trees and to appreciate both.

Or as this Sufi proverb expresses in an equally clever manner: “Trust in God, but tie up your camel.” 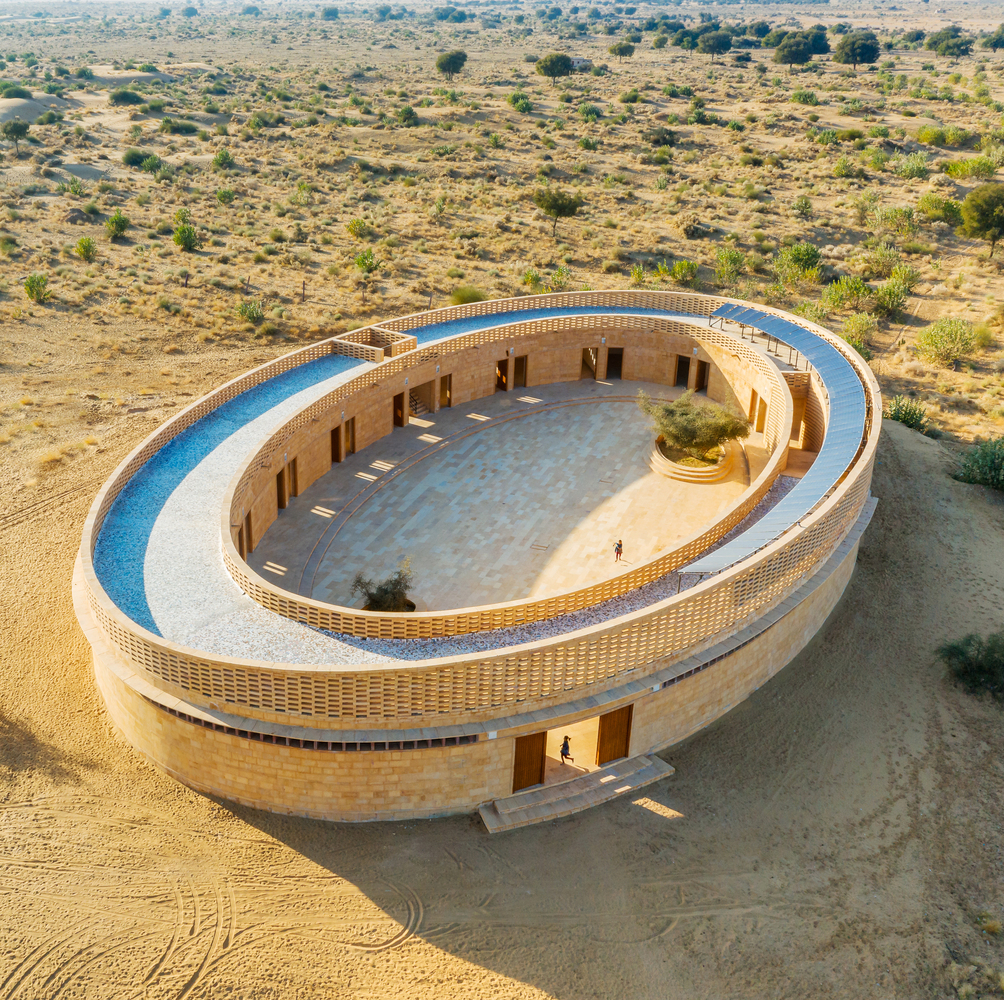 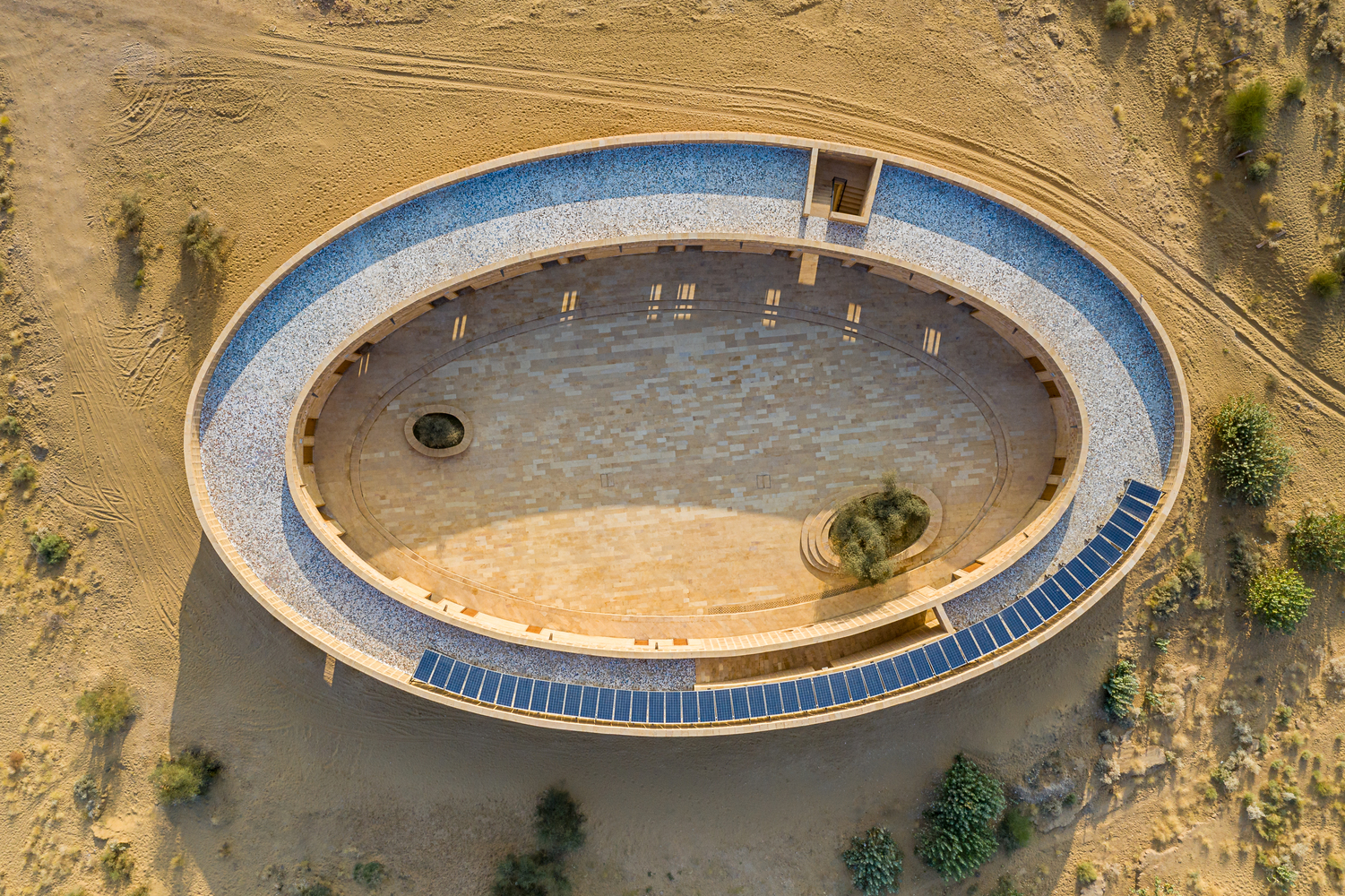 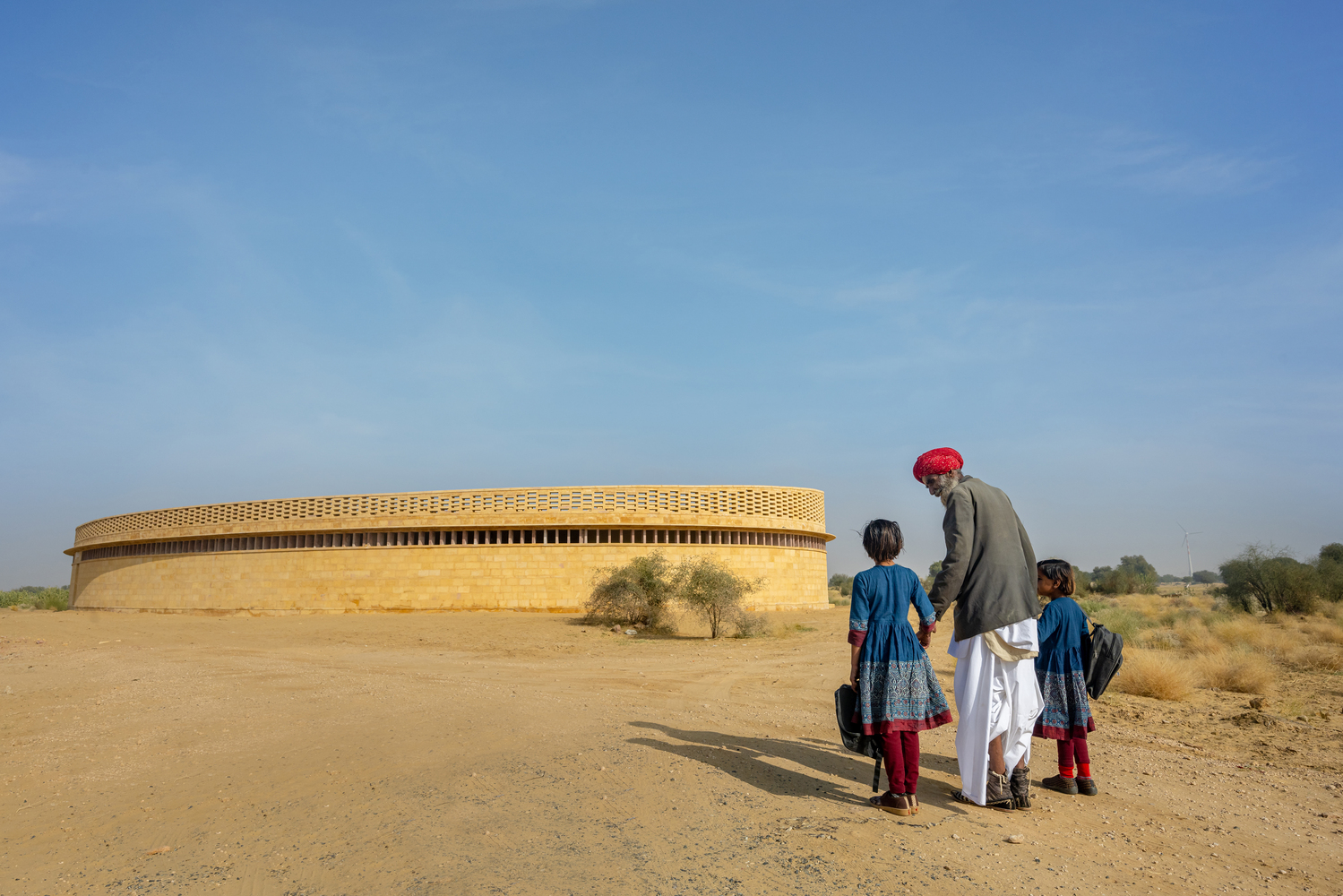 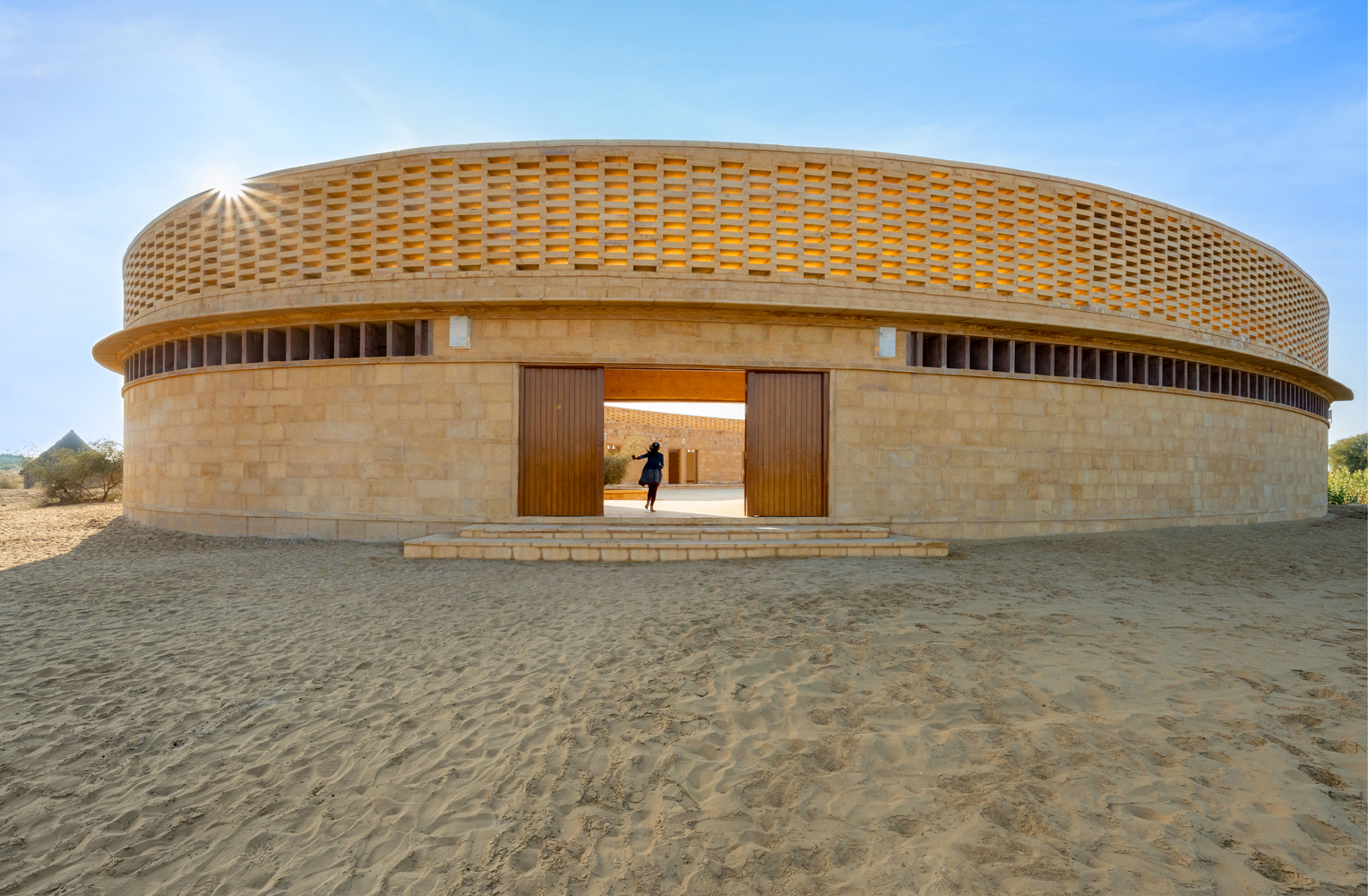 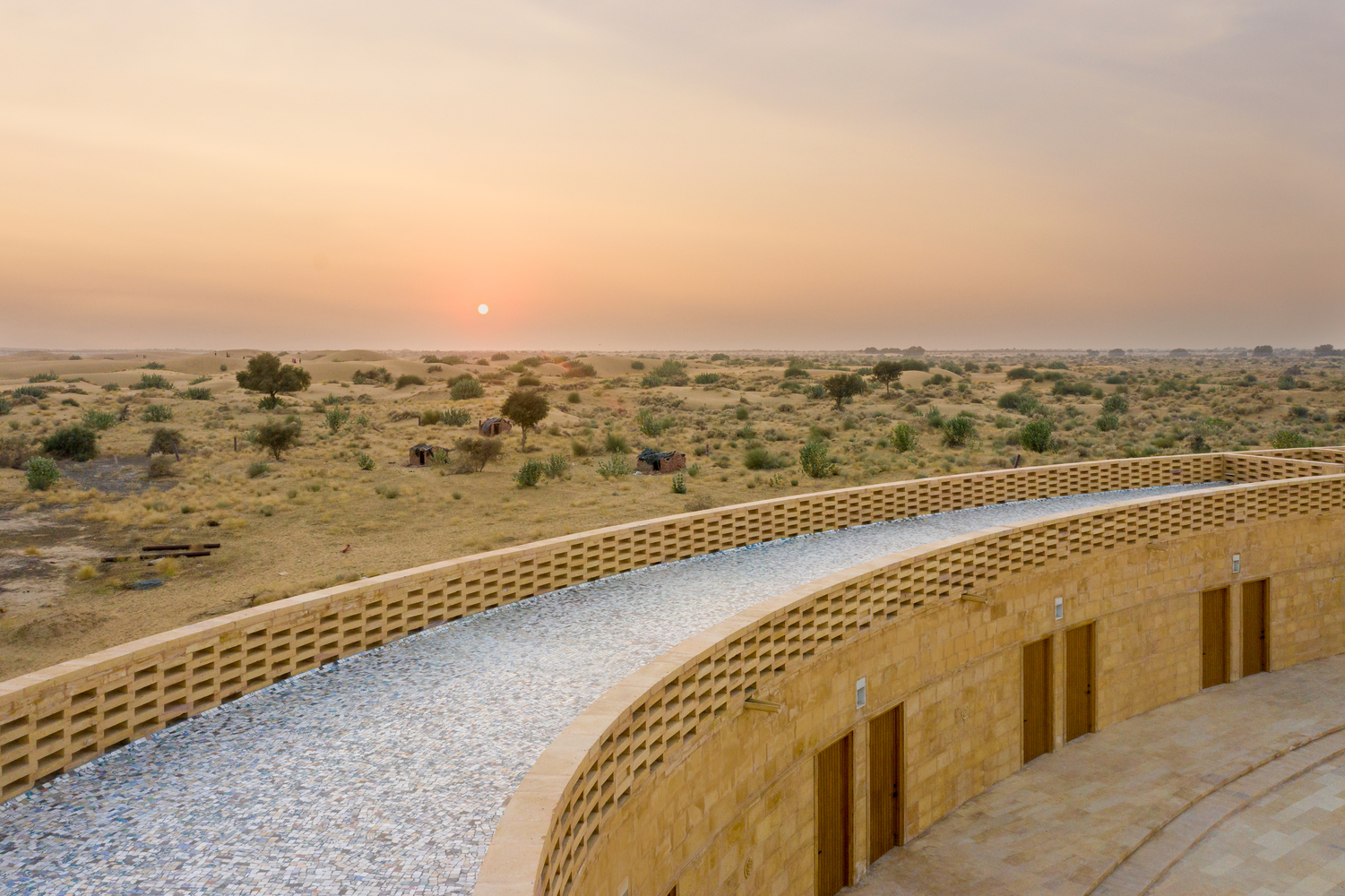 There’s lots to love about this school in India, not the least of which is the tantalizing oval form, made of local limestone blocks that blend so seamlessly into the landscape on which it sits.  Add to that the beautiful basket weave pattern of brick that tops it off to create a large rooftop patio – sweet in its own right but if you look carefully you’ll see that the screen isn’t level all the way around, subtly sweeping upward to great effect.  And the blue tile of that roof patio is a fun little touch. 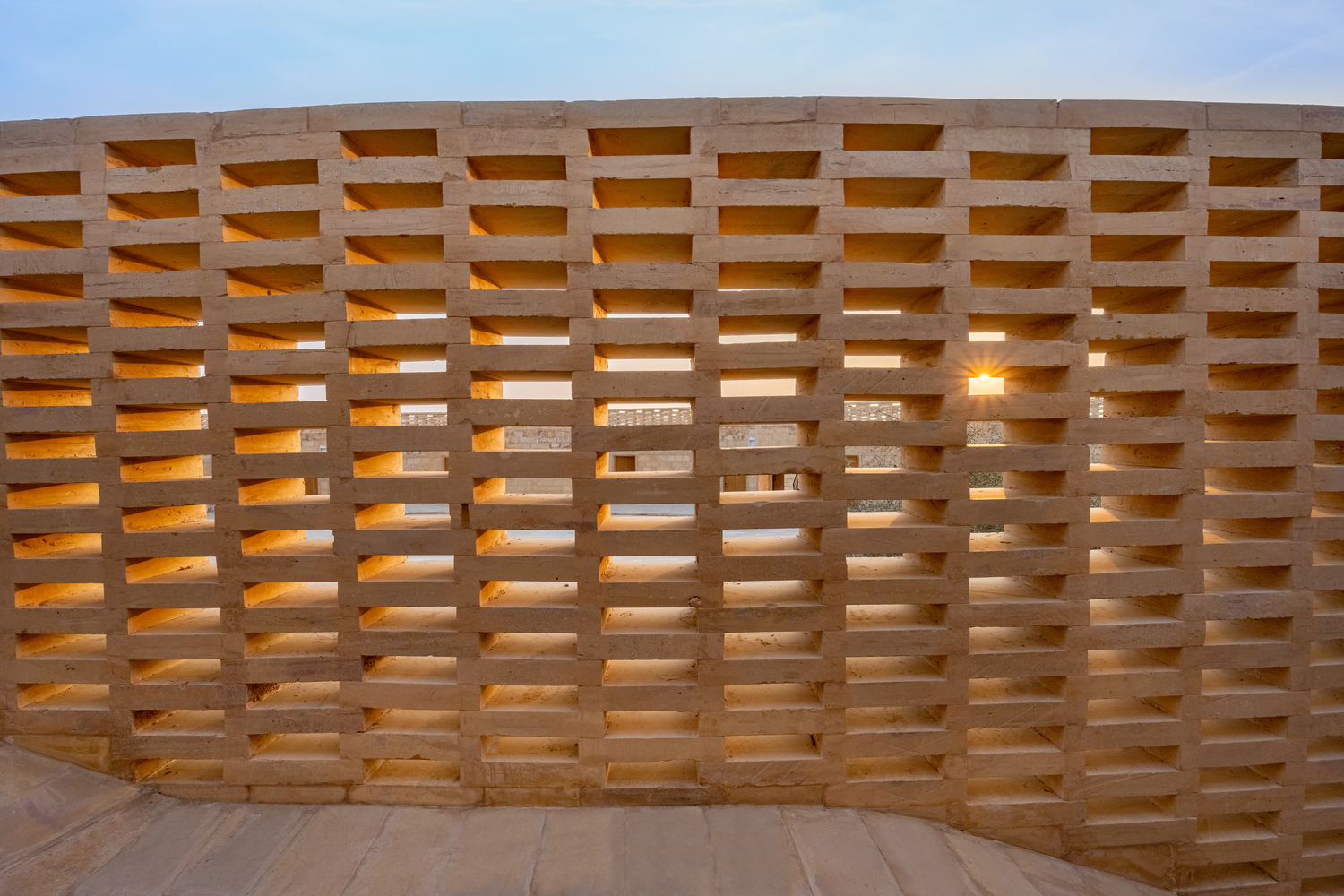 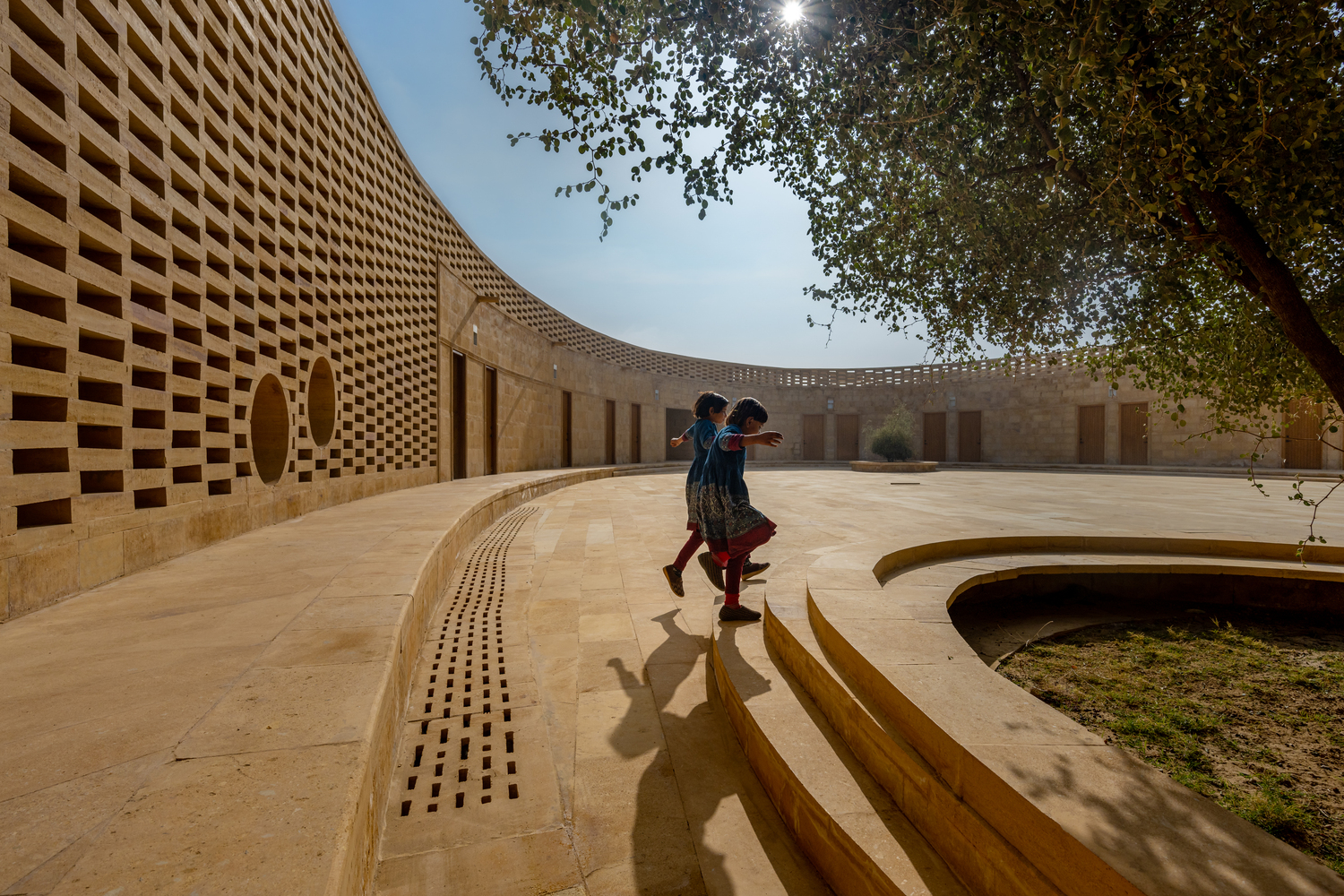 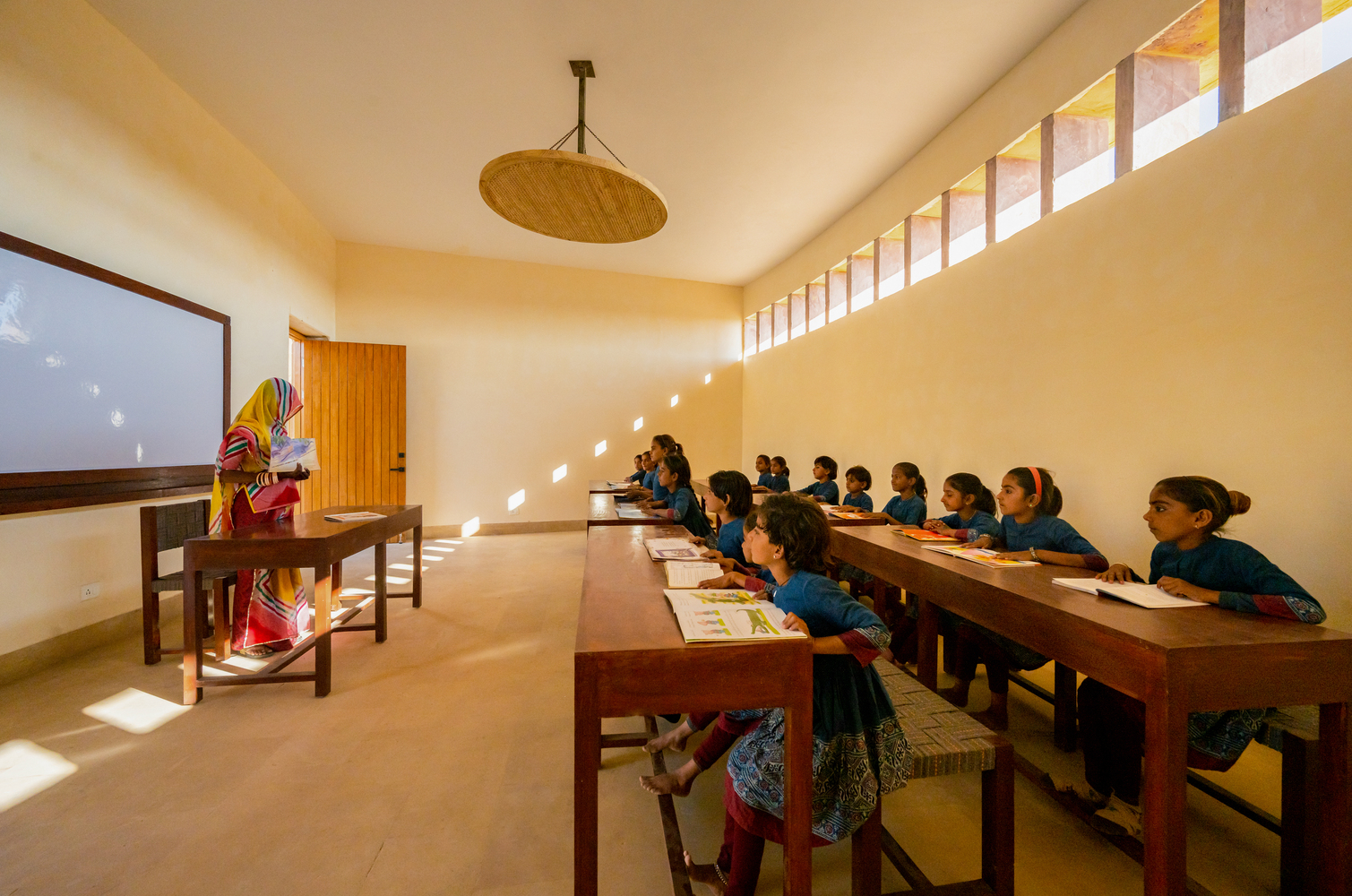 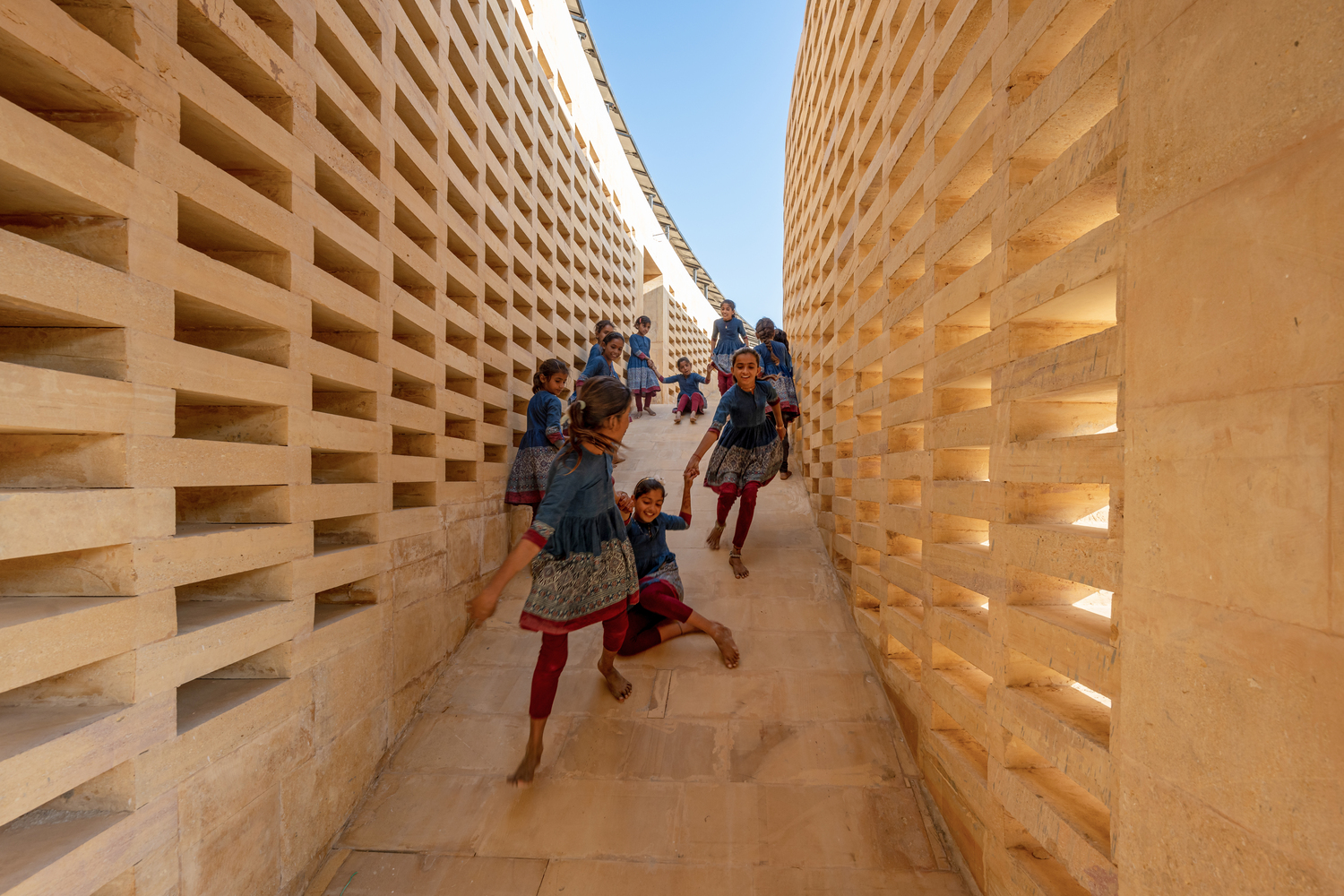 The brick weave also does double duty by accelerating the wind through the venturi effect, helping to cool the courtyard in the extremely hot locale.  Likewise, the thick limestone and mortar do their duty in this regard by creating a thermal mass that absorbs the heat throughout the day and keeping temperatures within the classrooms manageable without need of mechanical support.  Rounding out the trifecta, the clerestory windows along the back do their own double duty to illuminate without glare as well as let the hot air rise and escape. 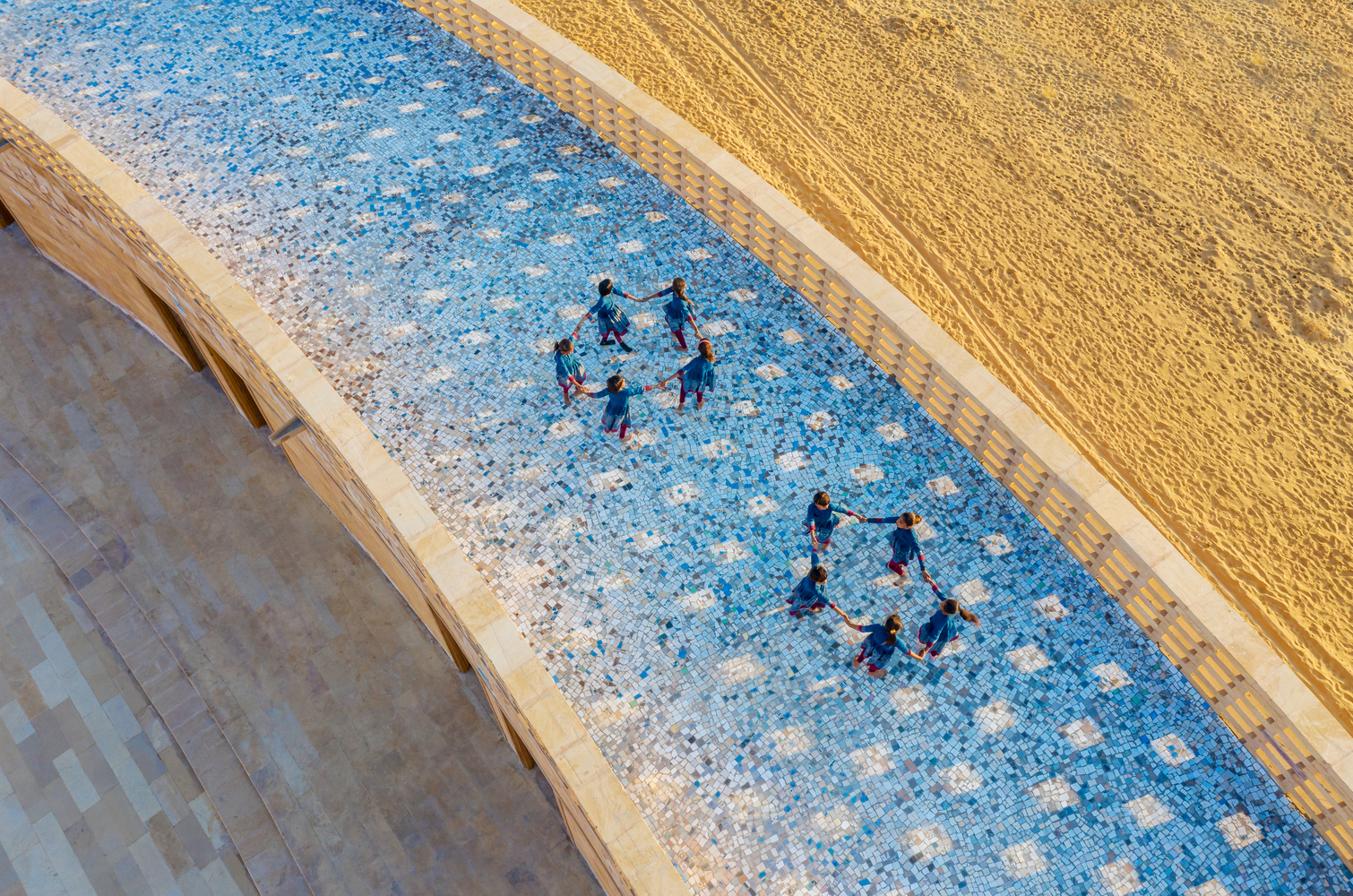 This is an architecture of a place, for a place, and that makes it top notch work.

I just saw an interview with Stephanie Hsu (and Ke Huy Quan) from Everything Everywhere All At Once, and she expressed something quite cool:

“I’ve always been drawn to films that have sort of big philosophical cores but are really about a small slice of life.”

Which is a great description of EEAAO; it’s got a massive philosophical core and resonance while, at the same time, it is about a very narrow and intimate slice of life.  It is about the places and spaces where we all live, and that is what makes it universal.

Her quote also speaks to something that I absolutely love about exploring ontological philosophy:  just like the film it too explores huge and amazing things, with insights into the being part of human being that are profound and deeply fascinating.  And again, just like the film, all of those grand things are things that are having an impact on us on a moment-by-moment-by-moment basis, touching us and every single aspect of our everyday, “mundane” lives.  The more we unconceal and get, the more our lives can transform.

And in there is a great reminder, for it can be all too easy to get hypnotized by these grand ideas and think we’ve gotten it and that we are especially clever… without ever doing the actual work to bring it into our lives and to have it make the impact in those everyday ways.  In a sense, we can eat the menu while thinking that’s the meal.

Perhaps even more often are the times where we may intellectualize it all and to relate to it only in an abstract manner… in order to avoid looking at ourselves and our lives and to avoid where these insights could reveal things that our calculating selves would rather not look.  All, in the end, to avoid discomfort and to avoid doing the work that will bring us closer to whom we profess we want to be.

Stephanie’s observation about EEAAO is a great one, a reminder that there is always a personal side to being human, even when and especially when we learn and uncover more and more about what it is to be human.  And if we want to create that more perfect experience and expression of who we are, it’s a reminder to bring it down from the lofty clouds and to do the work and to apply it to ourselves, all the way down into those small slices of life. 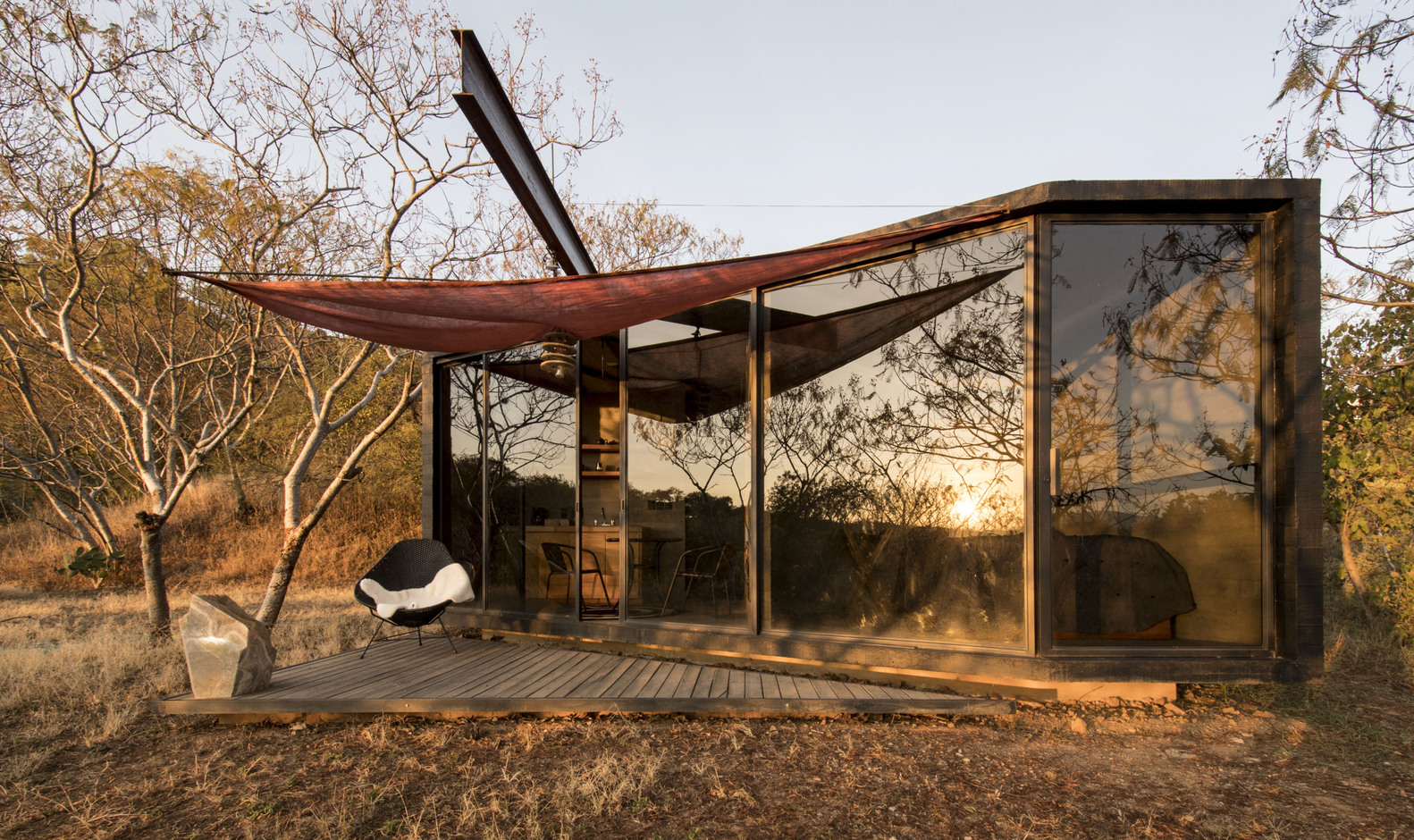 Love this little retreat/cabin in the hills of Mexico.  Small and straightforward, yet delightfully evocative. 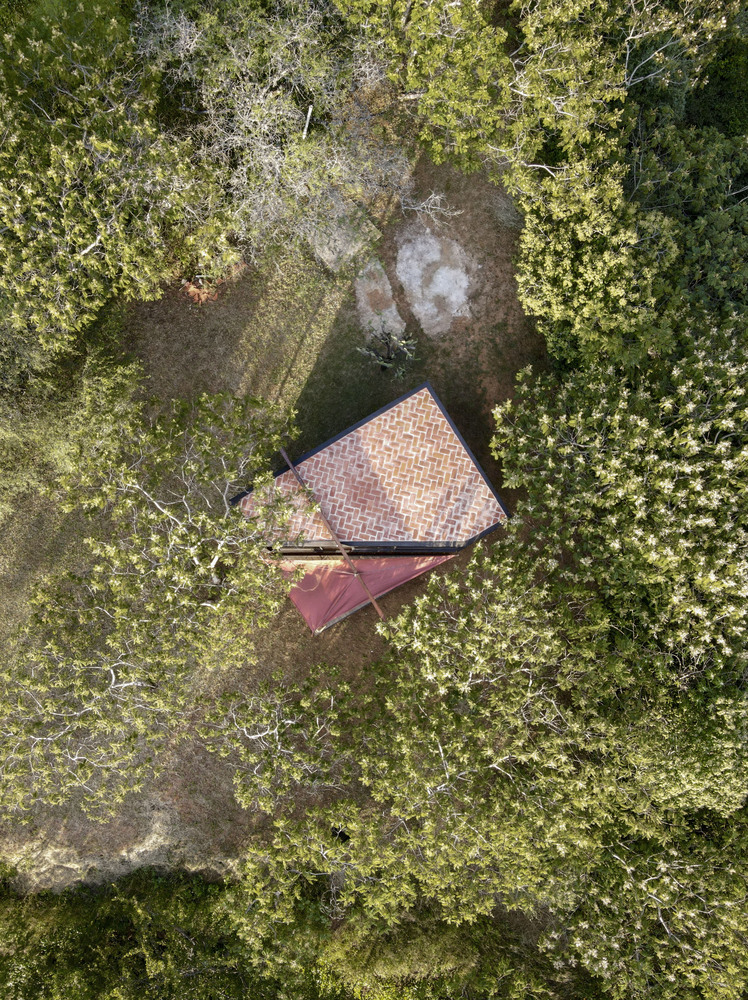 For starters, it’s a truncated box, with a patio covered a triangle of canvas as an awning that completes the rectangle from above… with a bonus that the canopy is supported/suspended by a nifty steel beam perched on the cabin’s roof. 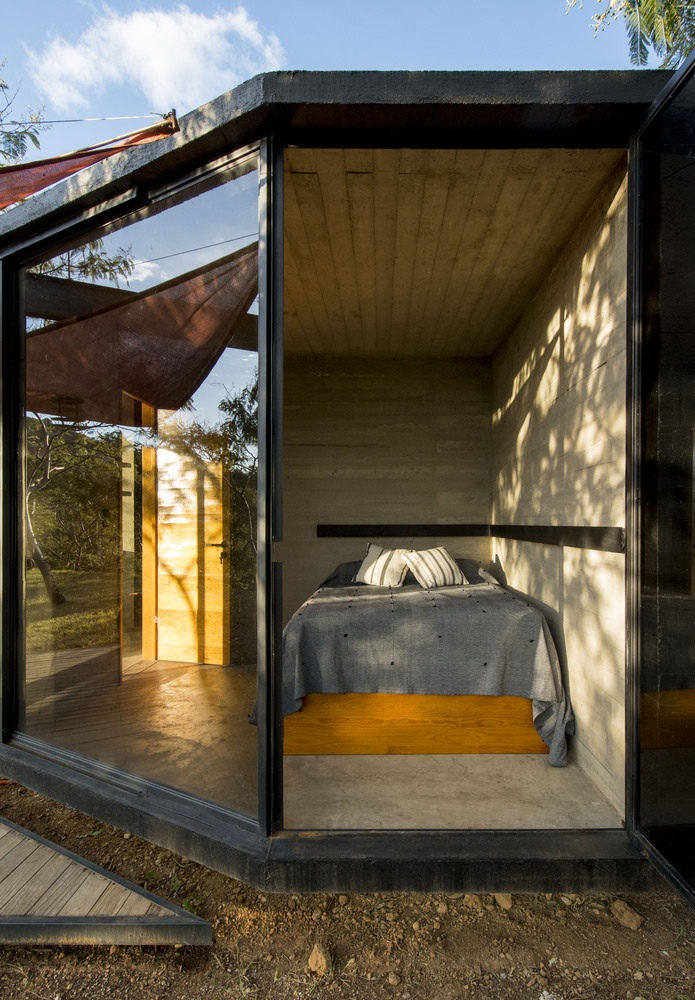 The cabin itself rests on a foundation that’s a tad smaller, making it all appear to hover and float off the ground. 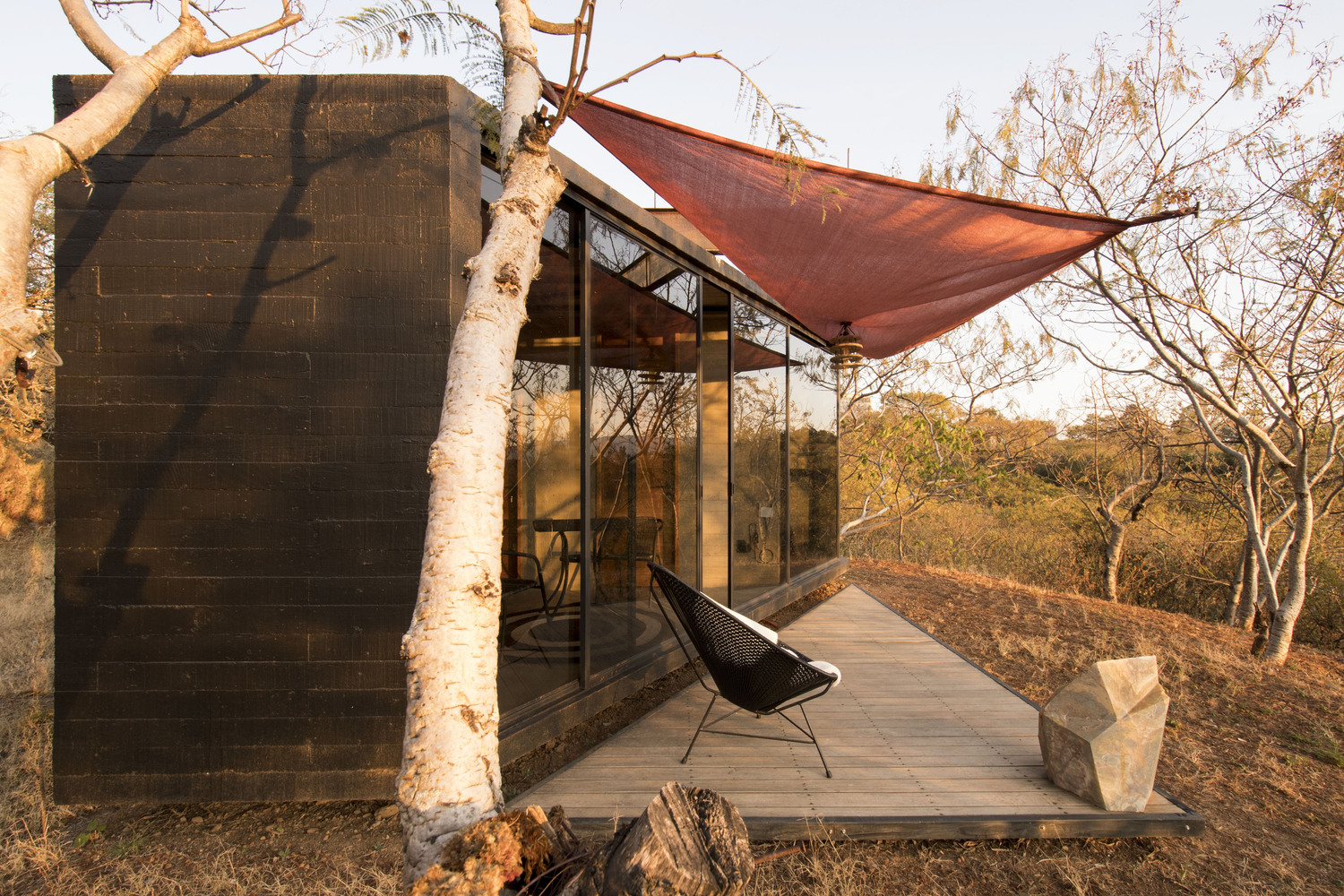 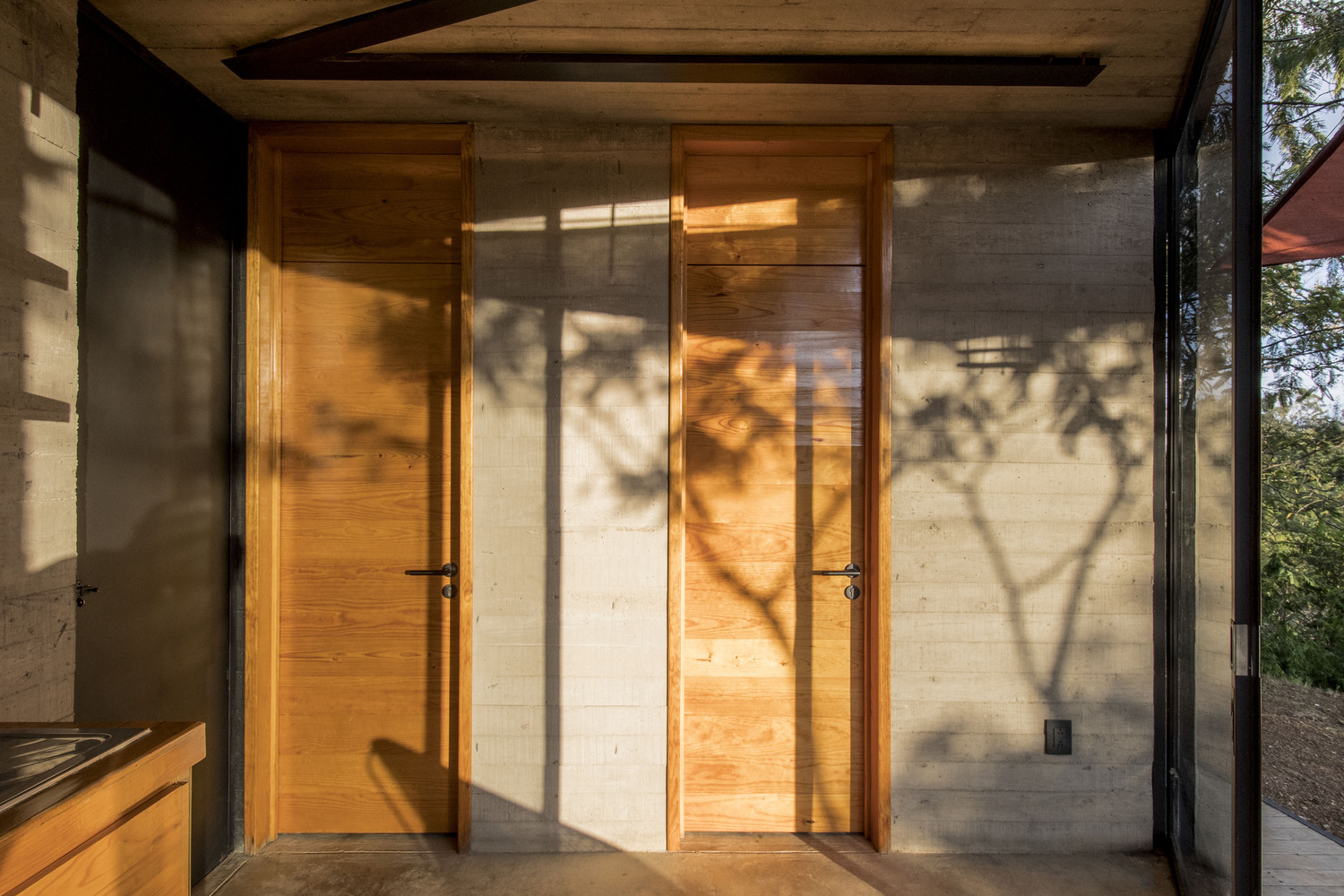 Board formed concrete lends a nice texture and scale to the whole thing, left natural within but painted black on the outside — something that I think works really well, creating subtle highlights and a rich ‘charred wood’ look that lets the building fade well into the landscape. 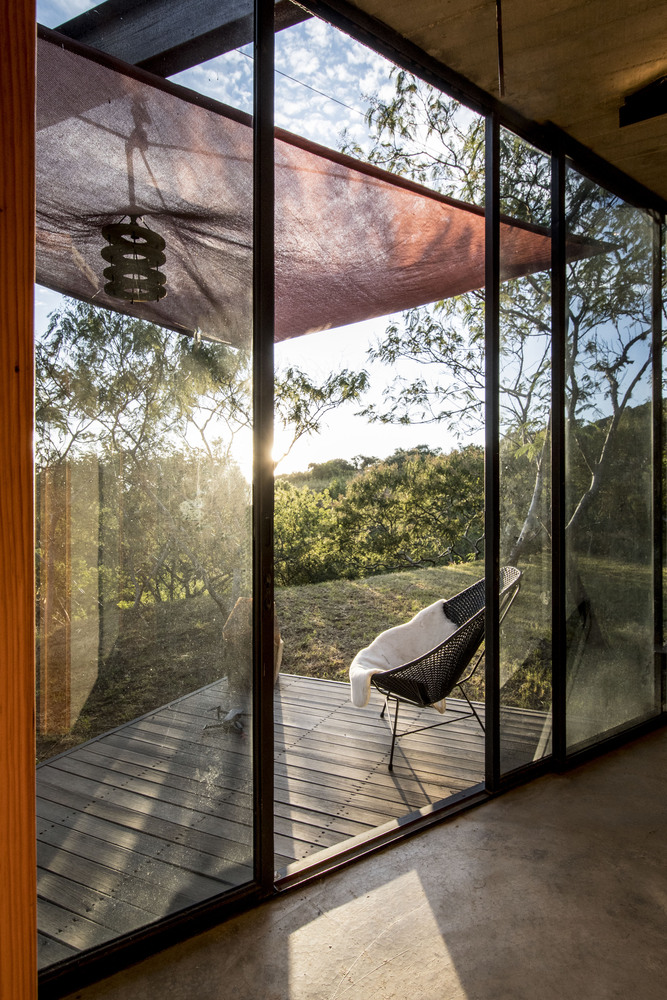 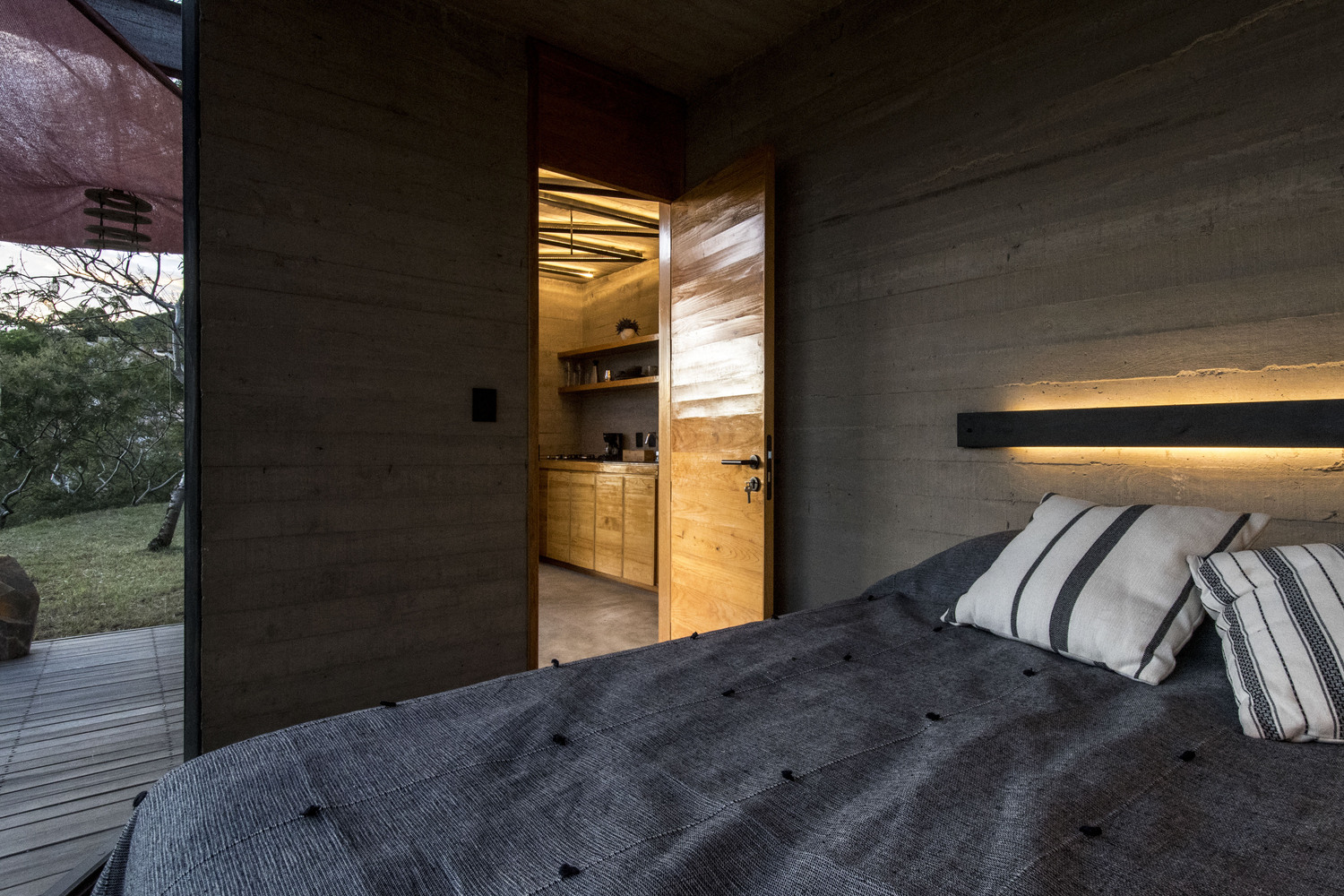 Enclosed on three sides, the last side is slick steel and glass, stretching towards the light and the world. 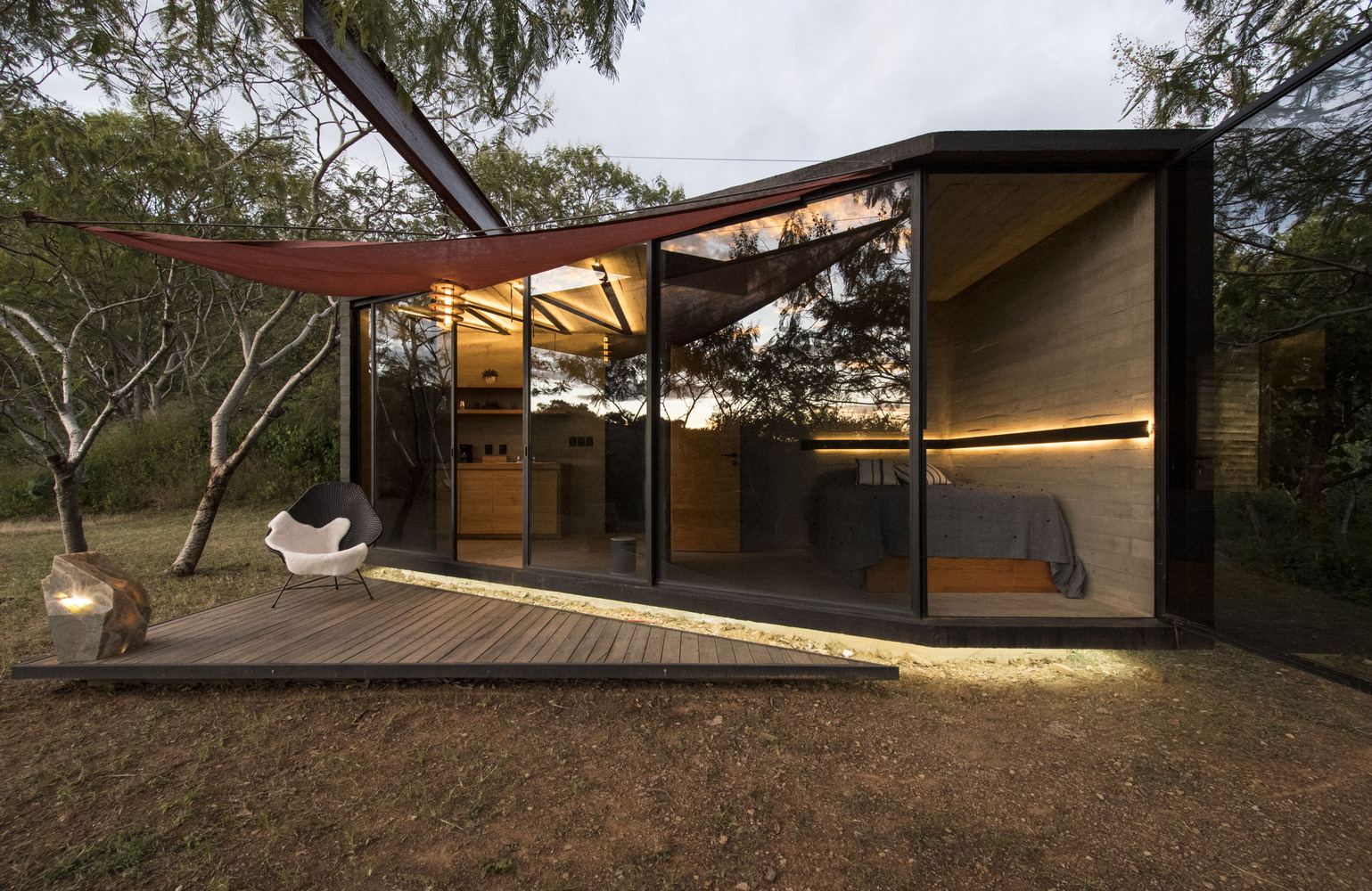 A small retreated of simple elements designed with care and flair.  Great work. 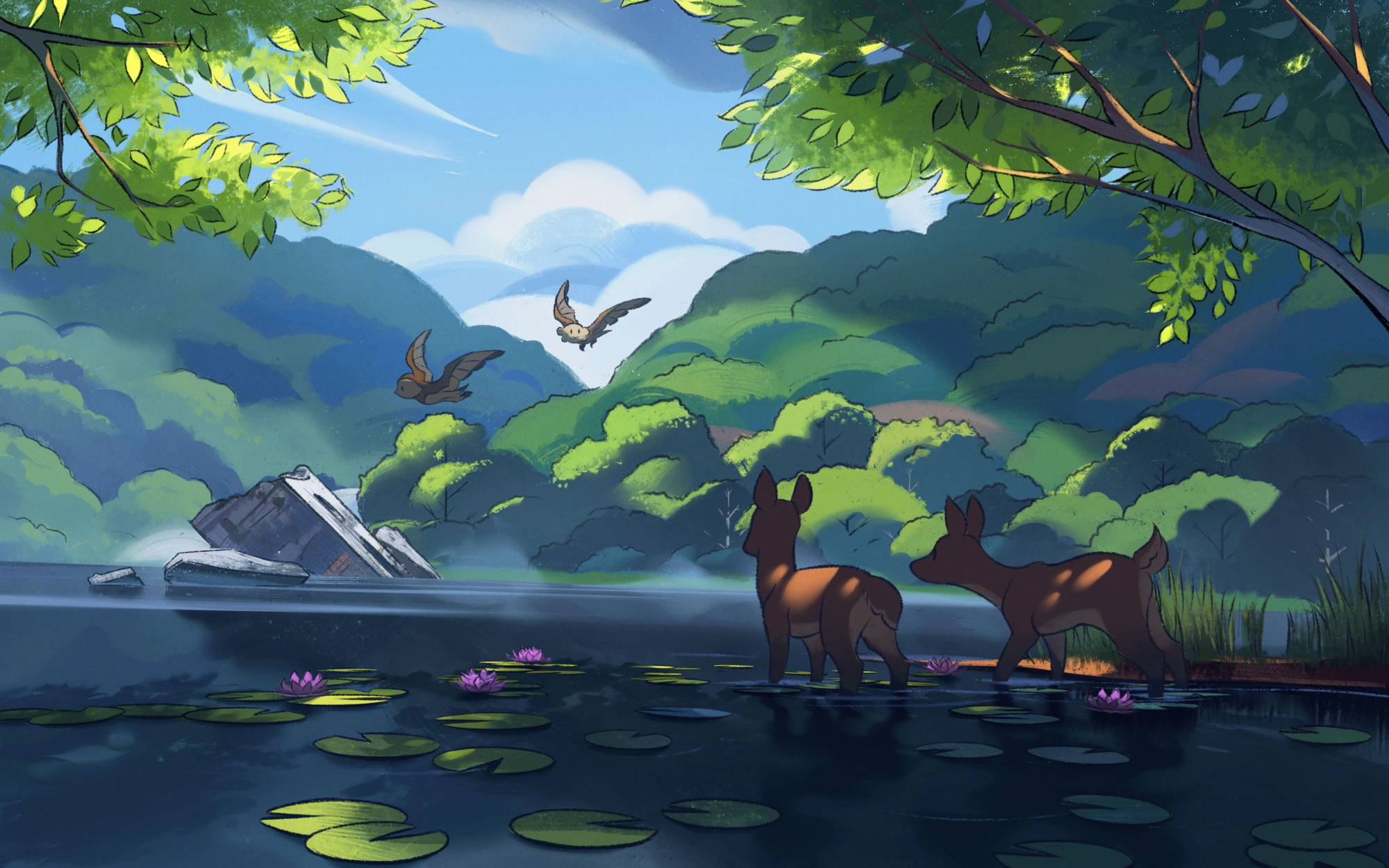 I love this little pastoral piece of art!