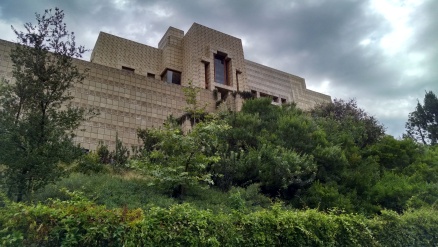 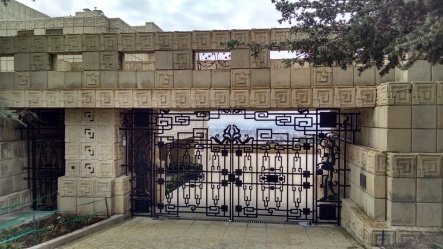 Alright, after that tease here’s the real textile block building!   Frank Lloyd Wright’s Ennis house, built in 1923. Both the idea and the floor plan are simple – but, as with many things, it is the execution that renders this stunning. The idea was the textile block itself, using a simple technique and material rarely used in residential construction (the humble concrete block) but made elegant through the addition of a geometric pattern relief, used in patterns of repetition (thus, patterns used in patterns). The plan was unified with a long loggia that brought light and views and rhythm, coupled with very Wrightian elements such as the incredible hearth and an attention to details with geometric stained glass windows and many custom and art-worthy elements for everyday mundane details.

This is a bold house, with prominent planar volumes and a strong visual impact from the textile blocks, following a motif with great intensity. 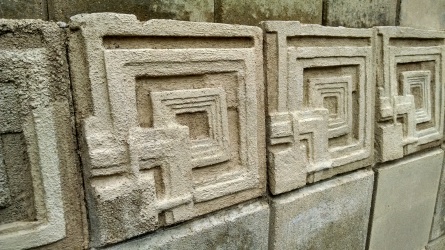 Unfortunately it was not open to the public, so I only got to experience it from the outside, but I’m very glad I could experience it. The house has suffered greatly over the years, due to impurities in the concrete mix and the heavy air pollution. The 1994 earthquake and heavy rains a decade later almost brought the house down (great sections of the retaining wall gave way, and temporary steel beams were inserted to support the house). It’s been heavily restored now, and has a secure owner.  With an easement that’ll open it up for limited viewing a few times a year, perhaps I’ll be fortunate to be in town one day that it is open.