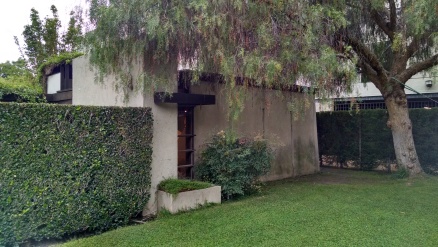 The next stop in my LA trip retrospective is a visit to the Schindler house. Built some 90+ years ago, it doesn’t look like it was built 90+ years ago… mainly because it broke all the molds and came to define what would come to be known as the modern “California” style home.

At least, in most ways. The house was decidedly un-traditional in its layout. For one, it was built for two families, each with a couple of studio rooms in separate L-shaped wings (each with their own patio/courtyard), combined at a knuckle where there was a communal kitchen. For two, Schindler, along with later house inhabitant Neutra, believed in the fresh air principle and so there was no traditional bedroom, only two, open air sleeping “pods” atop the house. That one didn’t prove to be all that popular or successful.

The house did, however, usher in open- and flexible-living, the extensive use of glazing and sliding panels for indoor/outdoor living, clerestory windows, and unadorned planes that defined a crisp form.

The house has a clarity to its language and derivation of space that is powerful. The thick, tilt-up concrete walls cement the house firmly to the ground, and are perfectly counterpointed on the other faces with ample glazing and views to the private gardens. The frosted glazing set into the heavy concrete walls (in those slots seen in the images above) are an inspired touch, adding their luminous quality to the room and working to actually emphasize the mass of the wall. The spatial volumes, of rooms, of walls, of fireplaces, of window bays, all interlock and intersect to create a richness of experience.

Many details, such as the raw and exposed freestanding copper piping in the bathroom that formed the supply for both the sink and the shower, all made of concrete, are fanciful touches that are raw and elegant at the same time. Other details, such as the flat roof and clerestory windows, were defectively ahead of their time and suffered much leaks and wear and tear. The house was a laboratory for a new style of living and building, and it shows.

And what a great testbed it was, and is.