What’s this? Not just one, but two FLW houses on the same trip? Yes!

I’d first visited the Hollyhock house in 1996, at the tail end of a trip to the LA area. I had a Monday free, and while I knew the house would be closed that day a friend and I drove out there to look at the house through the chain link fences.   I had been to visit a few Maya sites the year before, and Wright’s homage to their architectural language was decidedly present, and, at the same time, decidedly something quite distinct. Spare in places, rich in others, its concrete volumes had a presence. Now, some near-20 years later, there was no way I wasn’t going to visit this house, and get to see the inside.

So it was that once again I was with a friend at the Hollyhock house, stepping through the sculptural concrete front doors. The house is more formally known as the Barnsdall house, named after its owner Aline Barnsdall, but the name Hollyhock comes from Aline’s favourite flower, the hollyhock, that Wright used over, and over, and over, and over, and over again as an abstract motif throughout the house. Where the textile block houses went for continuous textural surfaces, the Hollyhock house uses much more spare forms as a foil to sculptural flourishes. And here is much of where the richness of the house develops, with Wrightian touches of stained glass, intricate furniture, carved pillars, and more, all done in and with geometric patterns that possess their seemingly improbable mix of simplicity and complexity.

And the hearth. Oh that hearth. This is the thing that really drew me to the house in the first place, so many years ago. It is grand, it is surrounded by custom furniture, it too has a geometric pattern embossed upon it, but it is also surrounded by a pool of water, with a skylight above… all designed to catch the moonlight and reflect both it and the light of the fire off the water and glint it off that massive sculptural face. I don’t know if it ever worked as well as envisioned, but the thought of it is quite something.

We weren’t allowed to take pictures on the inside, so for a great interior and exterior tour, check out this link.

Two bonus items here… one, is that the project manager for the Hollyhock house was Rudolph Schindler. (!) Second, a game of where’s Waldo – you can see the Ennis house from the Hollyhock grounds: 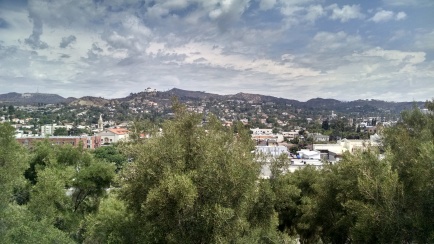