Along with character sheets, another “feelies” thing that I’ve tried recently is creating little character stand-ups* for our new FATE campaign: 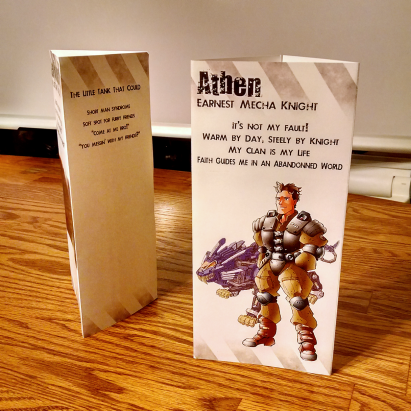 As the age-old saying says, images are wickedly powerful at conveying lots of information and world feel in a very quick and immediate manner. Many a character by many a player has been inspired by (or based on) an image, and it is not uncommon for players to commission a portrait (or draw one themselves!) of their character. There’s just something evocative about seeing another person, even if it is only a drawing.

These stand-ups are mainly a simple way of keeping that image/portrait front and centre. With each player placing their character’s stand-up in front of them at the gaming table, whenever we interact with each other the image is right there to lend it’s evocative assistance. Personality, flavour, history, attitude, aptitude, and even world atmosphere is readily made present so that our actions and interactions more easily come from within that space.

As this is a FATE game, I also inscribed our aspects, and that too has been useful as a reminder for all of us of not only the character but also what to invoke/compel.

We’ve used these for a couple of sessions and so far I’ve been pleased with how they turned out and how they work at the table. For the next iteration I’m going to be sure to put the same info on all sides (depending where you sit at the table you may not see the image). They were simple to make, and like the character sheets, there’s an opportunity to use the graphic design to evoke more atmospherics.