Also during my trip to TO for the holidays I visited (with @Articulationsv!) the Art Gallery of Ontario, which features an addition by Frank Gehry*. 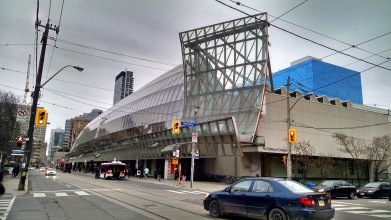 While I’ve been to a Gehry building before (the Disney Concert Hall in LA) and I’ve heard him speak before**, this was my first time really able to experience the space/inside of a Gehry building. His works are sculptural for sure, bold forms and make quite the impact on the urban fabric, but I was reserved on Gehry as a whole until I got a chance to go inside and really experience the space within, to experience what his craft has wrought.

The addition to the AGO is a moderate one, especially in comparison to the other big museum in Toronto, the Royal Ontario Museum (added to by Liebeskind). Off the top/back is a large metal clad box (I call it the big LEGO brick) with some sculptural stairs intersecting into an existing re-opened central atrium. But it’s the fish – that undulating glazed frame on the front known as the Gallery Italia – that is the big draw. 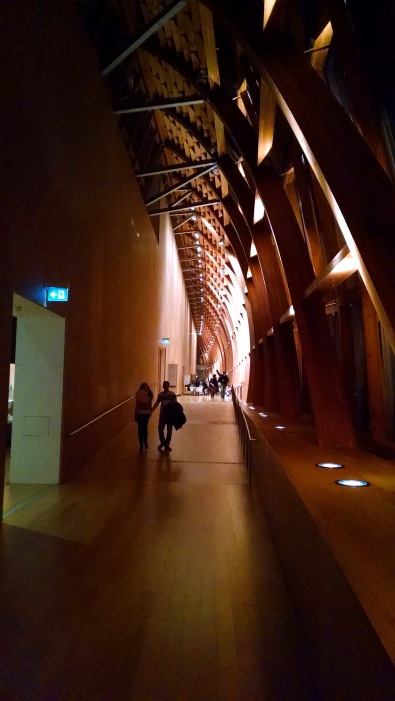 The inside of the fish is a long gallery of the “long room or passage, typically one that is partly open at the side to form a portico or colonnade” variety, an ancillary space to the artwork gallery it adjoins. Formed by large pieces of timber (inspired by the model ship collection contained in a lower-level gallery), it creates a rather warm and rhythmic feel while moderating the potentially overwhelming scale of its length. The detail work is simple but executed nicely with precision. 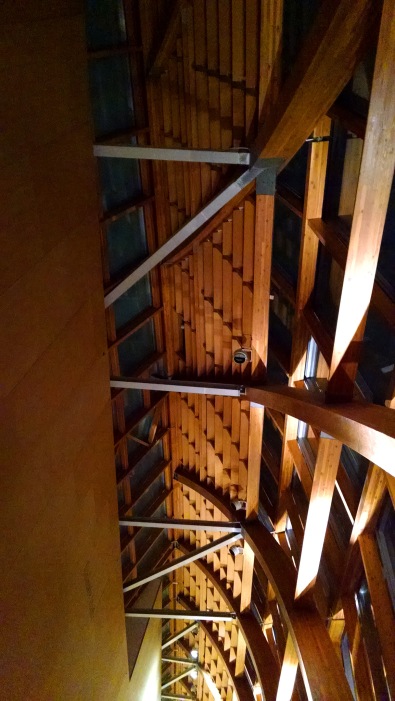 Spatially, I give it a thumbs up. It’s a nice space to be in, at least at night when I visited, a hushed space to pop out of the art galleries and take a breather. Proportionally it works well, and the richness of the wood and glass work well together. Overall it’s rather restrained – something that I normally wouldn’t associate with Gehry’s name – and it works.

I don’t know how this compares to Gehry’s other works, and I’d like to visit more to get a better sense of him as an architect. But here at least the space created within is a fine one, and a fine enough addition to the existing museum.

* The AGO being his first project in his hometown of Toronto.

** I didn’t really know much about Frank when I heard him speak in Montreal during the start of a trip we took in second year university. What I mostly remember from the lecture was that he spent at least half of it talking about hockey, playing hockey, watching hockey, etc. I don’t remember a single thing about the rest of his lecture, or if he even showed any slides. I only remember this as the architect guy who talked about hockey. Since then I’ve watched more of his lectures, such as those on TED, and he’s talked not one whit about hockey…