So, yeah, this happened! Yesterday I was fortunate enough to be able to visit a bit of the Walt Disney Studios lot.  It was a wonderful day of festivities, but also a wonderful day for geeking out not only on Disney history but also on the architecture and design of the studio buildings and the lot itself.  There’s something to be said about standing on the lot itself, surrounded by all the buildings and being in the alleyways made between them, to experience that space (and the meaning we bring to the space).

There’s something very lovely about the old original Animation, Shorts, Cutting, and Theatre buildings.  Disney oversaw the design of many of these, especially the Animation building, which was designed deliberately, looking much like a double-sided comb in plan, so that there was as many areas available with windows so that the animators would have access to as much natural light as possible.  Trees fill these “light-alleyways” now (the building was converted to administrative use during the dark days when Disney Animation was not doing very well), but still the feel is very much there.

Taking a step back, the building does exude its utilitarian function, but Disney was an artist, and knew the effect that art and surroundings had on people.  The articulation of the building, with the continuous green bandings and the brick base or brick highlights around the doors, carry through on all of the buildings of that era, little touches that help give them scale and texture, as well as helping them relate to each other.  It’s great to note that the buildings were not exact copies of each other, but that they used the elements and motifs in slightly different ways.  For buildings to talk to each other, they don’t have to be exact copies.

This carries through on some of the newer and much more expressive buildings, the most prominently known of which is the Michael Eisner Team Disney building.  Very different building type and feel, yet the redish brick and yellow stucco still make an appearance, even if the roof is being held up by the dwarves.

(As an aside, I’ll say here that, like all so-called architectural styles, there are examples of wonderful post-modernist buildings, and examples of some pretty awful executions.  I think the hyper-PoMo lines Team Disney building, with its stylized neo-classical puffery and dwarves holding up the oversized pediment, really works as a Disney building.  It’s kind of silly and playful and the proportions are not so horrendously out of scale, nor is it too reduced to too much of a caricature of the building form.)

I was also really struck by the use of fonts.  I’m… also a bit of a font geek, and there’s a font used throughout the Disney property (you can see it repeated in the signs on the buildings above) that, again, really made things feel cohesive and really helped evoke the sense that you were in the Disney domain.  For the employees working there, that careful level of detail can be felt and helps create a strong sense of place, and a wonderful reminder of what they’re there to do and the art they’re there to create or support in being created.

A modified version is even used on the wonderful road markings! 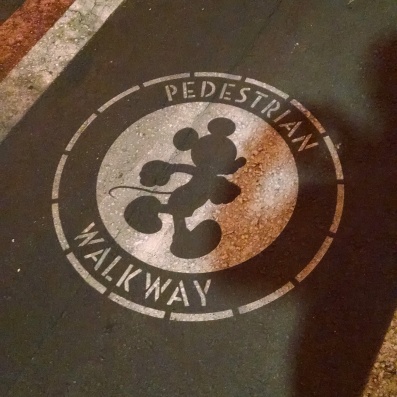 One building I didn’t get to see very well as it is across the street, is the new home of Walt Disney Animation, the Roy E Disney Animation Building.  The most playful of the bunch, with its big hat entrance and the large “fin” that stretches the length of the building, there are still touches that reminisce to the original Animation building.

(One day, I will visit within.  Given my recent, achem, obsession with Zootopia and the rekindling of my love of Disney Animation, I must visit….)

I’ll end with a mention of the new archive building, a nice little composition in glass and steel, and a shot of the Zorro parking structure, where we started and ended our day: