Came across this picture today that adds some perspective on the SpaceX barge landings… and makes them even more impressive:

That’s a 737.  SpaceX is vertically landing 737s on a barge in the middle of the rolling ocean with sub-metre precision.  Holy the cow!

I’ve been enjoying hearing friends and many more  share about their eclipse experiences.  What’s really stood out for me (beyond the complete excitement) is the near-universality of the sentiment of how absolutely mind-blowing it is, in a way that surprised each and every one of them.  It did not matter how much they knew about it, how much they researched, or even how much prep they did.  There, in that moment of totality, in that instant of being present to a world in an eclipse, it defied all manner of expression.  It defied, and still defies, description.

There is a (sometimes big) difference between knowing about something, and actually experiencing it.

I’ve heard this shared elsewhere too, around marriage, parenting, warzones, natural disasters, concerts, and more.  My own most vivid of these is when I planted my first garden.  I knew all about the biology behind plant growth, I understood about planting and watering and that food grows, I’d read accounts of other gardeners.  But putting that tiny seed in the soil and then a few months later being confronted with a 6 foot high plant bursting with produce was almost unfathomable.  “I didn’t do anything but pour water on it, and yet… blam, look at this!”

These are context-shifting and world-growing moments, a place where our consciousness can expand and we can inhabit more of ourselves and the world.  They are times to reflect on that we are never ‘done’, we never ‘know it all’, and we’re never not able to grow.  They are a reminder to not take ourselves, and our views, and our certainties, and our supposed knowledge, so darn seriously.

And, verily, they are times for pure, unadulterated wonder and bliss, being present to what’s so, and nothing else.

* Thus too this is why imagination and developing imagination is vital.  It may not get us all the way there, but even part way can be powerful…

** And I already have begun plans for travel to see the 2024 eclipse! 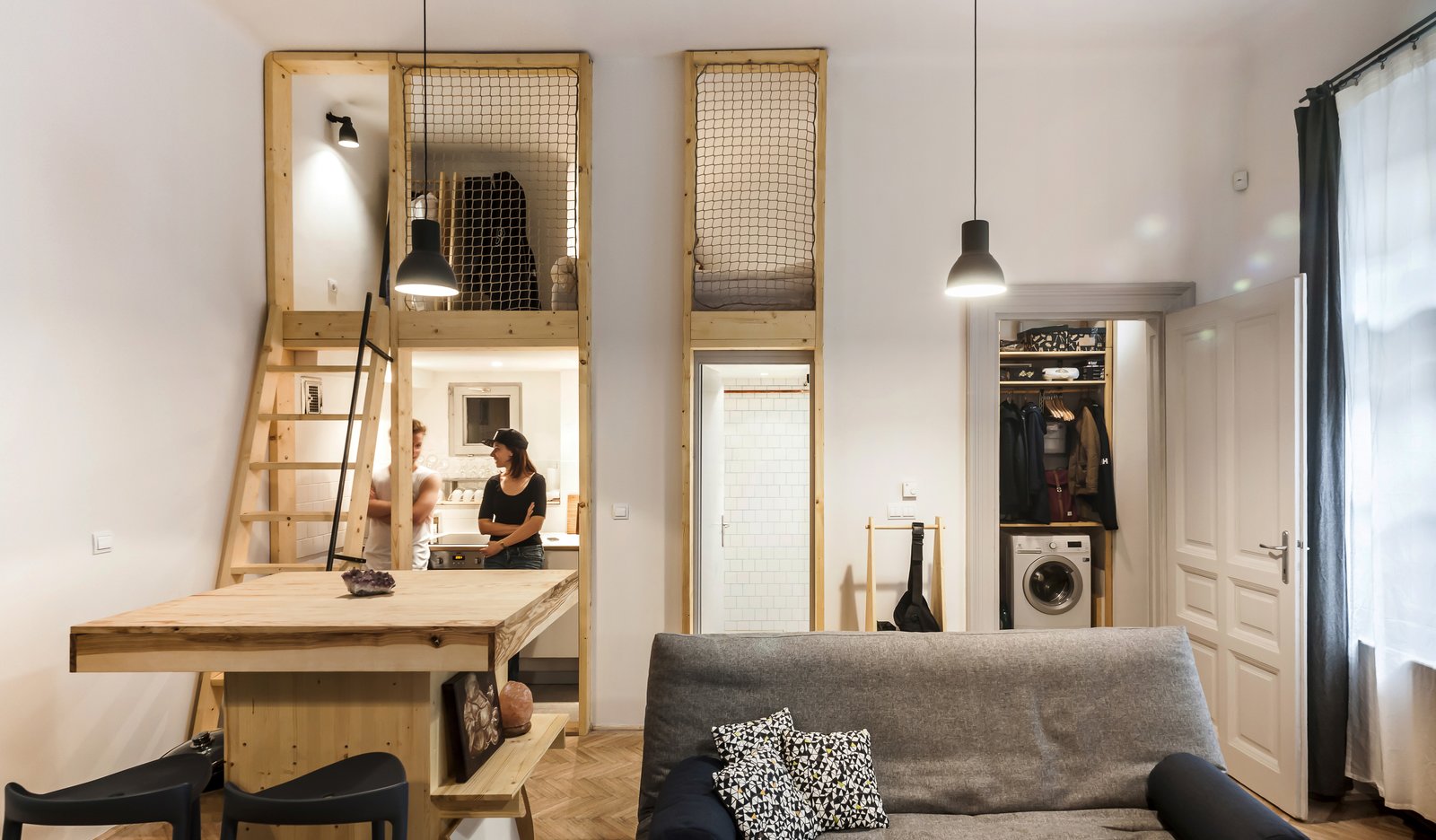 There’s something nicely rhythmic about this apartment conversion in Budapest.  Check out how the way the kitchen and bathroom niches are framed individually in muscular wood (in a pleasing ratio to each other), while at the same time they also continue upward to encompass a continuous loft overhead.  The same frames, at the same time, contain individual slices and something that spans the both of them, while relating in rhythm to each other and also relating to the existing doorway.  That’s some nice interplay there, not to mention a great way to create some very usable and pleasing “rooms” in an otherwise small apartment.  The netting is a nice final touch – safety while preventing the loft from becoming cut off from the rest of the space (not to mention I find it works with the rough frame aesthetic). 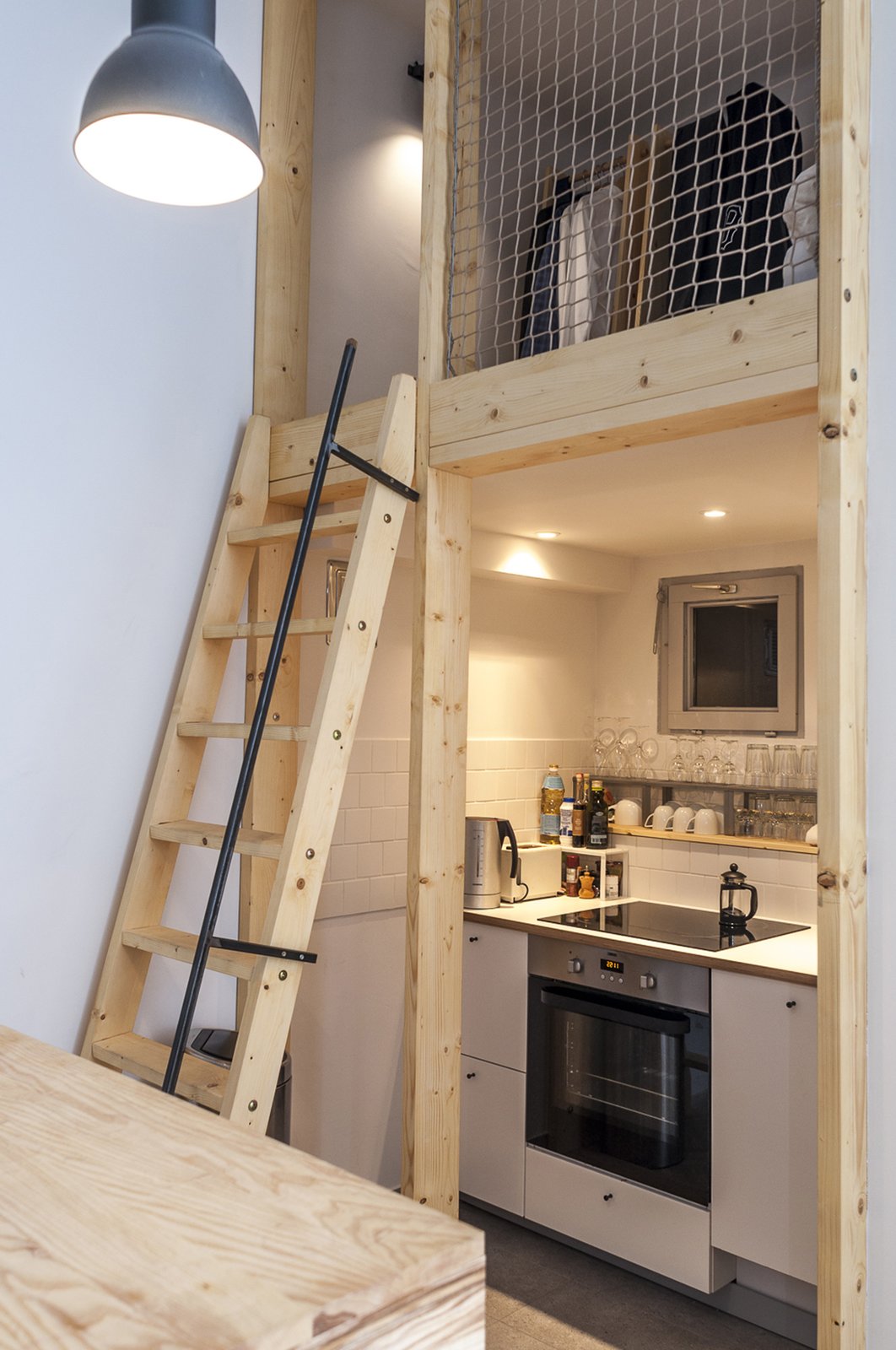 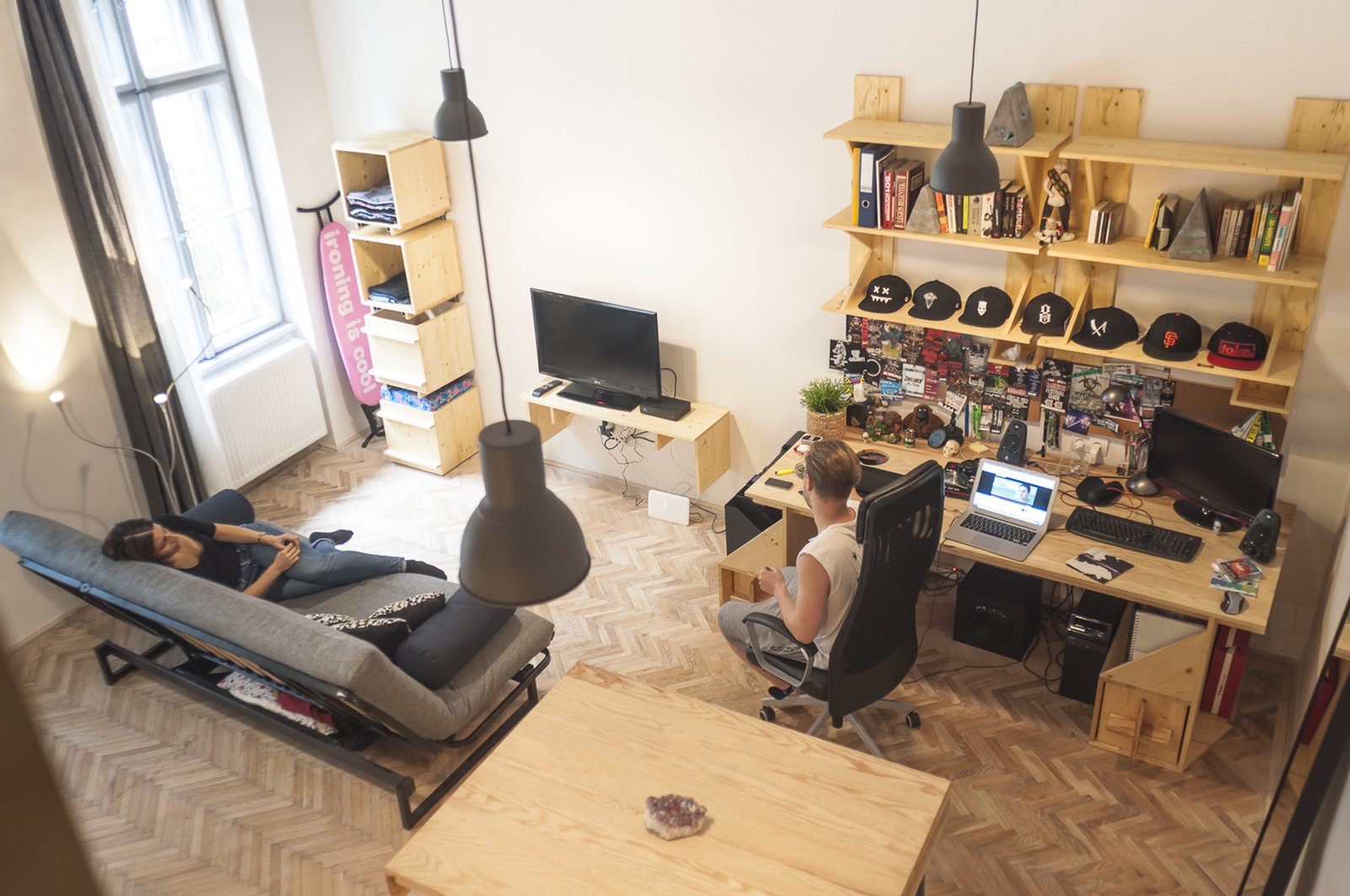 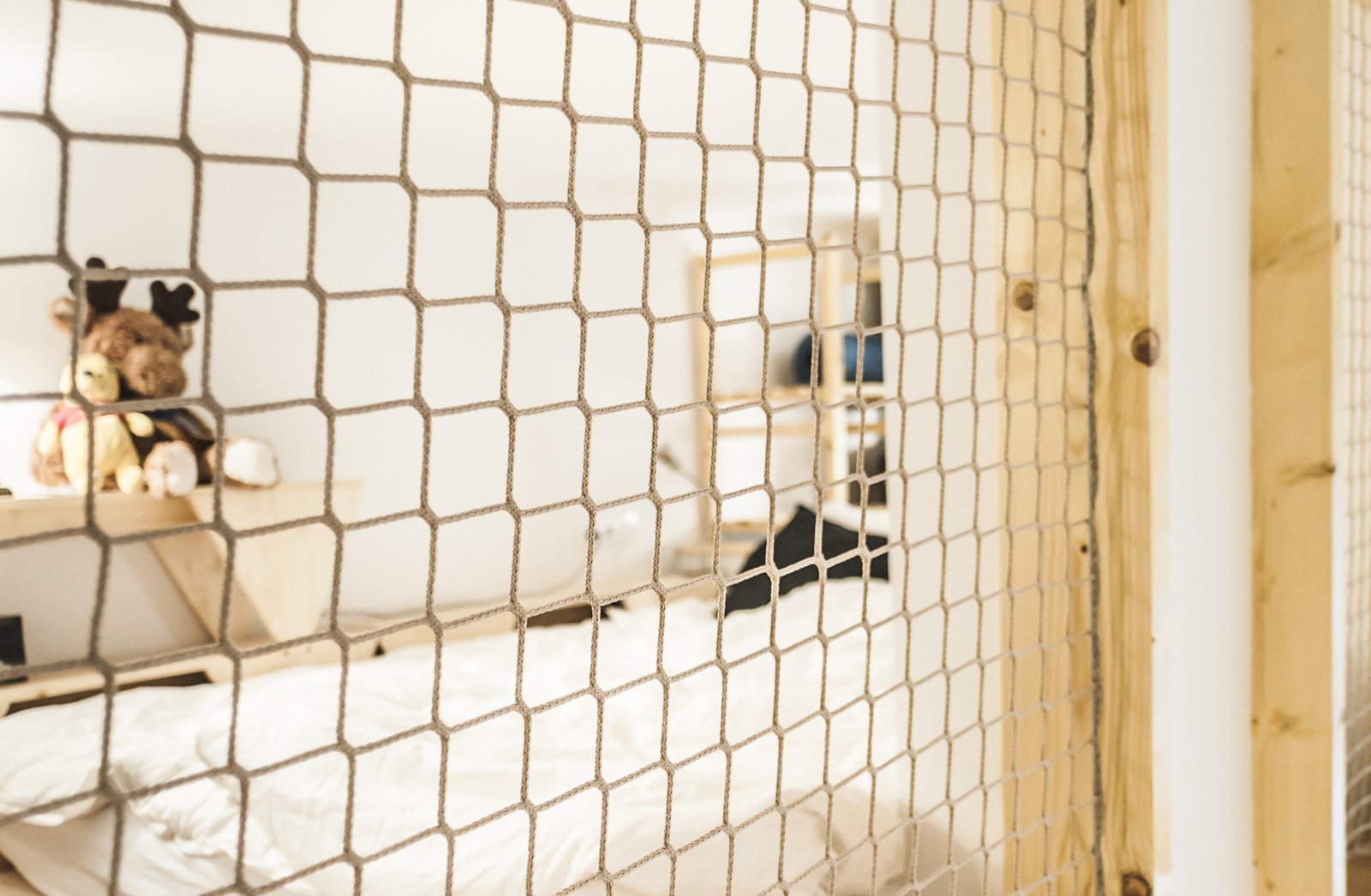 The rest of the place is a plethora of custom furniture all also made from the same raw wood detailing, all pairing nicely with the wood flooring (that I’m guessing came with the turn-of-the-century tenement building).  The table hides a fridge and doubles as a cutting board and kitchen work surface, the desk and cubbies are reconfigurable to house much more storage than might be expected.   Light, airy, compact yet active and uncluttered, this is nicely done work.

Playing for Change around the world with Stand by Me…

The “I” has nothing to do with it.  Rather, the hijack is in full swing, leading us away from what the “I” truly wants.

Afraid for its survival, our identity goes on overdrive.

And, unfortunately, we end up the poorer for it.

Woohoo!  Saturday I trucked down to LA (and back the same night…) for an event on the Disney Studio Lot!  With the new DuckTales series/reboot just released, the D23 team held a Disney Afternoon reunion gathering to celebrate all things, well, Disney Afternoon.  As a ginormous fan of the Rescue Rangers  and, to a lesser extent, Tale Spin and DuckTales, there was no way I wasn’t going to attend.  One does not pass up a chance to meet the daring chipmunk duo.

The main thrust of the day was an extended stint in the Disney Lot theatre for a great series of panels, interspersed with actual episodes from the Disney Afternoon (we got to see an episode of Gummi Bears, Tale Spin, and Darkwing Duck), reminiscence of memorabilia, extra trivia and interesting tidbits (concluding with the CooCoo Cola song!), and to cap it all off, a sing along!  Ahhhh, a whole day steeping in early 90’s nostalgia.

The first panels was with some of the creators for a number of the series that were at one point or another part of the Disney Afternoon:  writer Tad Stones (creator of the Rescue Rangers among others), producer/creator/editor Jymn Magon, and concept artist Mike Peraza.  Great to hear the behind the scenes stories including the genesis of the series (all of which, just like the feature animations, often began quiiiite differently from their final form and/or had meandering paths to production), as well as seeing early concept and pitch art, learning about the CAD drawings that made the Tale Spin aerial sequences possible, and how the afternoon itself came to be and how it fit within the Disney canon.

The second was a panel of voice actors led by none other than Bret Iwan, the current voice of Mickey (!) (Who, seriously, I would have had NO idea was him had he not been introduced that way and had he not dropped into character at the beginning for a bit — his regular voice is indeed quite regular… but once in Mickey mode it is 110% perfect Mickey). The legendary Jim Cummings was there (he’s voiced a gazillion characters for Disney) as well as equally legendary Bill Farmer and Katie Leigh.  It was fun to hear about how many of the shows were done ensemble recording style (all the actors in the room at the same time) and how the scripts would often get into their hands mere moments before the shoot.  Could’ve fooled me.  Apparently Jim was quick enough that often the scripts for Darkwing would come with his iconic entry line listed as “I am the terror that flaps in the night!  (Whatever Jim wants to say here, because it will be better than I can write…)”

Lastly we were treated with behind the scenes info on the new DuckTales (woo-ooo!)* series, including a few sneak peaks and developments that we were sworn to secrecy… sorry.  Can’t share.  But I can share that the new series was inspired, both in tone, story style, and even art, not only by the Carl Barks Uncle Scrooge stories, but also by Tintin (with them showing on screen the iconic cover for “Objectif Lune“)!  I devoured the Tintin books in my youth, so knowing it is an influence on the current series makes me even more excited for it.

After the presentations there were character greet opportunities and a chance to meet everyone from the panels.  And so… behold!  Kung Fu with the Rangers:

(If you look closely, you can see two smaller Chip and Dales riding along my collar — they tagged along with me from home…)  (Also, hats off to the castmember for a nice and dynamic framing job on this pic!)

We also got a bit of swag, including these very 90’s-style placemats featuring new artwork (and a nice A113 hidden easter egg).  90’s music was being spun by a fun DJ, there were Mickey shaped snacks (including PB&Js), photo ops, and milling about.  And some bonus playful fun by the characters as they came to and fro from their dressing room.

Needless to say, I had a blast.  I’m still completely giddy.  Great to meet up with so many other fans and geek out over shows that we loved and were crazy about.  I haven’t been surrounded by this many fans since the mailing lists I joined and discussed the heck out of on back in 93+.  Still lots of excitement and support for these old shows.  My fingers (and ear tufts) are crossed that the new DuckTales does well enough that Disney considers rebooting more of the old series.  (If you couldn’t tell, a new Rescue Ranger series would send me over the moon…)

Throughout the presentations, panelists would say “Oh, next time I can tell this story…” or “I’ll bring this to show you next time” and other “next times…”  I’m down for it.  If there’s another Disney Afternoon reunion, I’m so there.

* Right at the beginning they let us in on an in-joke that’s been going through the writing team for the new DuckTales which is that every time the title DuckTales is spoken, at least one person would go “woo-oo!” as per the theme song (of which the new opening sequence is killer!)… needless to say, this happened many, many times throughout the afternoon (with a whole theatre going woo-oo!).

Which is supposed to be frozen.

so do they come striding through,

marching down a line,

on paws so soft,

to greet another day,

aflame in the savannah

A couple of years ago, during a mindfulness and meditation panel I was co-leading, one of the participants raised their hand:

“If attachment, so suggests Buddhism, is the root of all dis-ease… well, how do you know when you are attached to something?”

Hmmm.  That was a good one.  It can be fabulous and very empowering in life to be committed to something, but at what point can we tell its crossed beyond a commitment into an attachment?

I paused for a moment to let this percolate.

“I’d say that… if you find yourself righteously hot, fixated, uncontrollably going on about something, and you’re gripped by it… then it’s probably an attachment.  There’s a visceral component to it, one of those ones that defies neat and accurate description but if you let yourself be sensitive to it you get to know that grip.  Actually, you can probably think back to a time when something was said or done or you learned that just had you react with such recoil and fury that seemed to come out of nowhere… well, bingo, that’s the feeling, that visceral reaction.  There’s something there beyond just a commitment.

And this is really good to notice, not only because attachments can cause us such distress, but because it robs us of our freedom and, perhaps counter-intuitively, kills our performance and our power.  It also means that maybe we should check that commitment, because I’ll bet ya if we have that reaction we’re actually attached to something other than what we’re saying we are committed to.  And if our authentic self wants us to embrace that commitment, authentically, then we’re going to want to deal with that inauthentic hidden attachment.

Once we’re out of the grip of attachment, we are free to play and be who we truly want to be.”

A great question that had me distinguish something for myself that day.