In many ways, my trip to Japan could have been billed as the “Ando Connection.”  The whole planning process began when I plotted the locations of many of Tadao Ando’s buildings all throughout Japan, and the end route was chosen to hit as many of them as I could.  This included what I thought would be the pièce de résistance, the Church of the Light.  Which was entirely amazing, and I may blog about it further in an upcoming post.  But it was his works on Naoshima Island that struck me the most, including a few absolutely mind-blowing experiences that broadened my awareness of how space could feel and what space could be.

The first of these moments happened not more than a couple of hours after we arrived, touring the outdoor artworks of the Benesse House compound.  And it began with a simple wall that grew from the ground.

And that was exactly what it is.  A seemingly simple wall, bisecting a portion of lawn and extending into a cobbled patio on one side, while descending a staircase on the other to a lower platform.  But that simplicity belies some stunningly skilled mastery of proportion, volumes, and notions of enclosure and expansiveness. 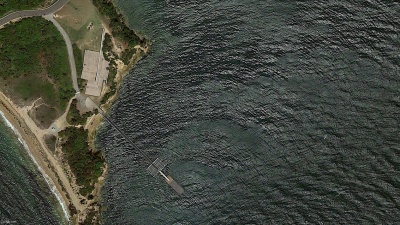 While the aerial view gives an immediate way to grasp the layout, the visceral experience of being there was way more intense than the sum of its simple parts of wall, cobbles, and stairs.  The play of nature vs the pristine concrete smoothness of the walls, the narrowness of one stair exploding out towards the sea, the interplay of different planes and levels as they connect and divide among the varying wide stairs at the other end, and the proportions and relationships between each element, all contribute to an incredible feel to the space. 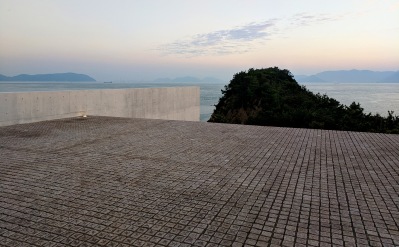 This is a piece that is meant to be experienced in motion.*  The shifting forms, planes, and lines as you move constantly reveal and hide something, and each new step brings a different framing of the forested hills, the beach, and the water beyond.  This is installation art and spatial art at its finest.

Under the broad upper plaza is a small room containing a work by artist Walter De Maria, primarily consisting of two, highly polished stone balls.  While hilariously calling to mind early 3D computer rendering** the reflective curves nicely played off the purely orthographic nature of Ando’s walls and by reflecting their room (the only actual enclosure in this piece) that you couldn’t enter gave a nice little extra spatial twist.

I think I walked around the entire thing for the first five minutes with my mouth agape.  It was that powerful.  And but a taste of what was to come over the next day and a bit on the island…

* To which none of my videos turned out very well, unfortunately!

* Highly reflective chrome spheres were supremely popular to show off rendering power and precision, they were almost an obligatory feature of early computer renderings and ray tracing.