A rather surreal — and very sci-fi — photo of Toronto!

A few years ago, a friend of mine was sharing about her battle against cancer.  Needless to say, it was an ordeal, and her daily experience was not pleasant in the slightest.*  “Oy,” I said, “I can only imagine what it must be like for you right now.”

“Thank you,” she replied.  But the way she said ‘thank you’ went well beyond a pleasantry… there was a depth to it, a certain fire around it mixed in with appreciation.  I must have given her a quizzical look, for she explained.  “I’ve had a lot of people tell me ‘Oh, I know how you feel.’  But they really don’t.  Unless you’ve gone through it, you don’t know at all what it feels like.”

Later on that evening, that exchange got me thinking.

Imagination is the path into empathy.  It allows us to envision other worlds and other people, and get a glimpse for ourselves what things could be like given the place, past, and experience of another.  It calls to us to get out of our own frame and get into that of another.

Imagination is of prime importance in the realm of being human.

But perhaps, in an opposite-side-of-the-same-coin sort of way, it is by putting aside our imagination and recognizing that imagination is just that – an ephemeral visualization of make believe – that even greater empathy is gained.

Realizing that no matter how great and creative we are, no matter how powerful our imagination, there exists still worlds and possibilities and experiences and feelings we haven’t visited, or are not (yet) capable of visiting, in our mind. **

And so  it may well be presumptuous to think we know something, and that we know the lows, or highs, that is and are possible to experience.

* Fortunately, she was a facile with the distinguishing of pain and uncomfortableness vs suffering.  Her spirits stayed lofty even as her body went sideways.

** Such as the experiences of those in the recent eclipse, or even my trip to Japan and visiting the works of Tadao Ando on Naoshima Island…

There’s something wonderful about brick.  There’s a comfort within its heft, and there’s a richness that comes from its perfect combination of roughness, irregularity, and the deep colours of the materials used to make them.  It’s also a material that is familiar, one of our earliest and longest lasting building materials.

So when you have a chance to go hog wild with brick… go for it. 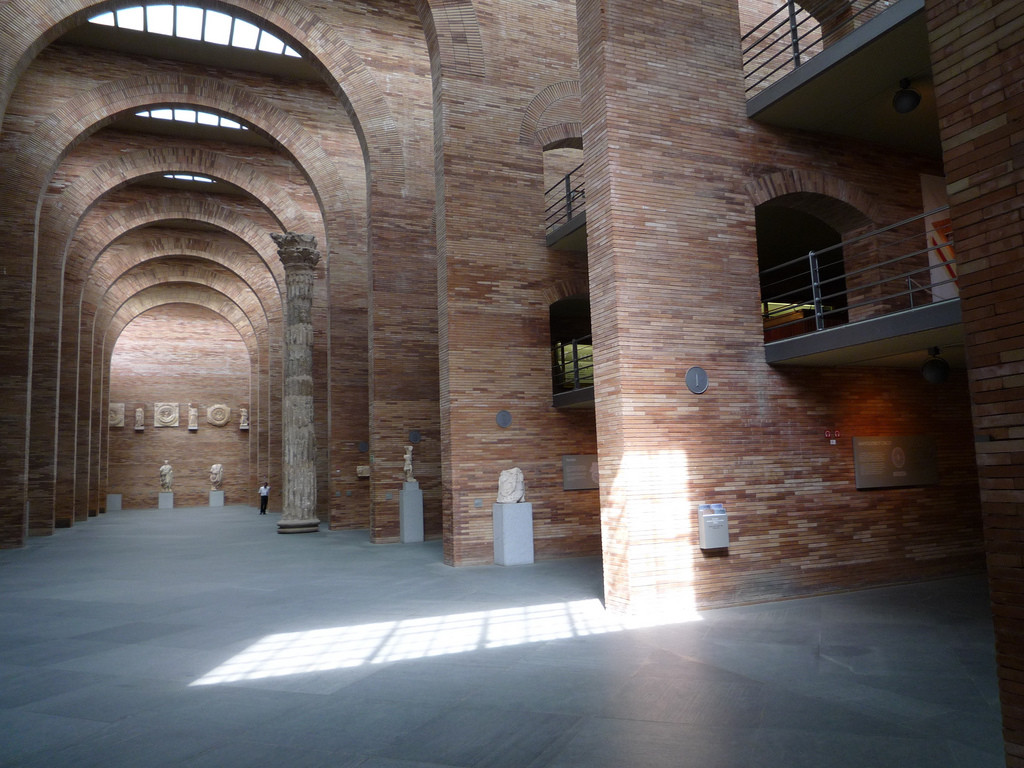 This museum of roman antiquities does so with spectacular effect.  It’s nearly all brick – inside and out – creating a sensuous backdrop for the exhibits within.  Built over and protecting a pristine archeological excavation (and providing access for the public to view it), and adjacent to further ruins next door, the brick forms evoke their ancient architecture while remaining decidedly contemporary. 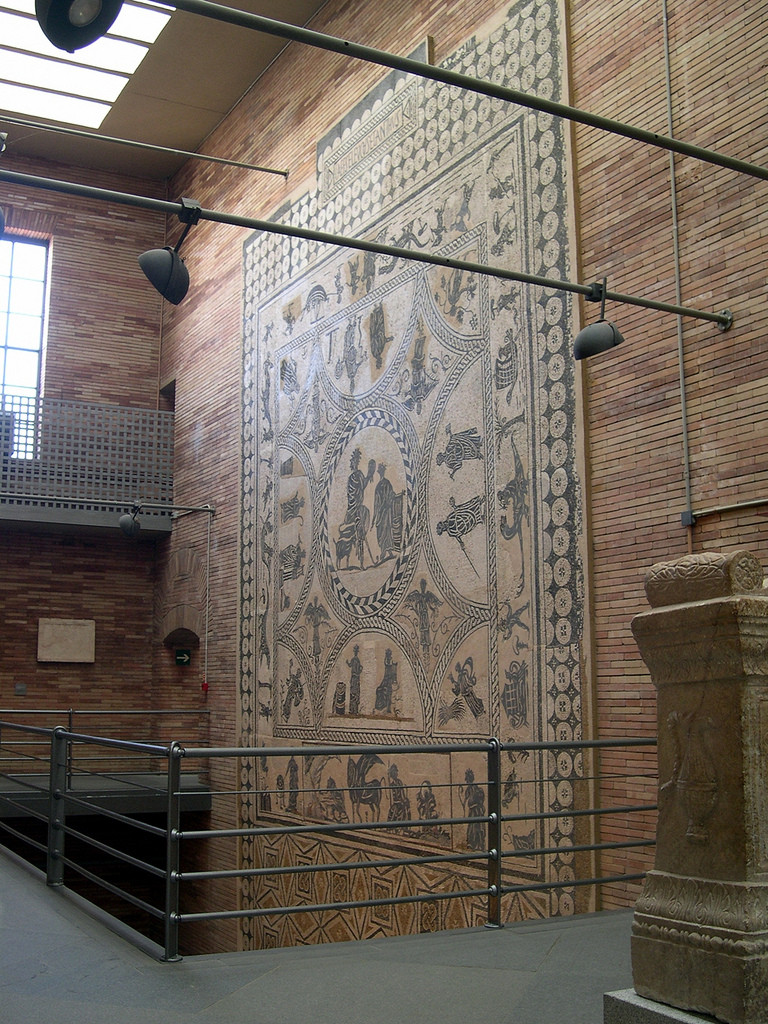 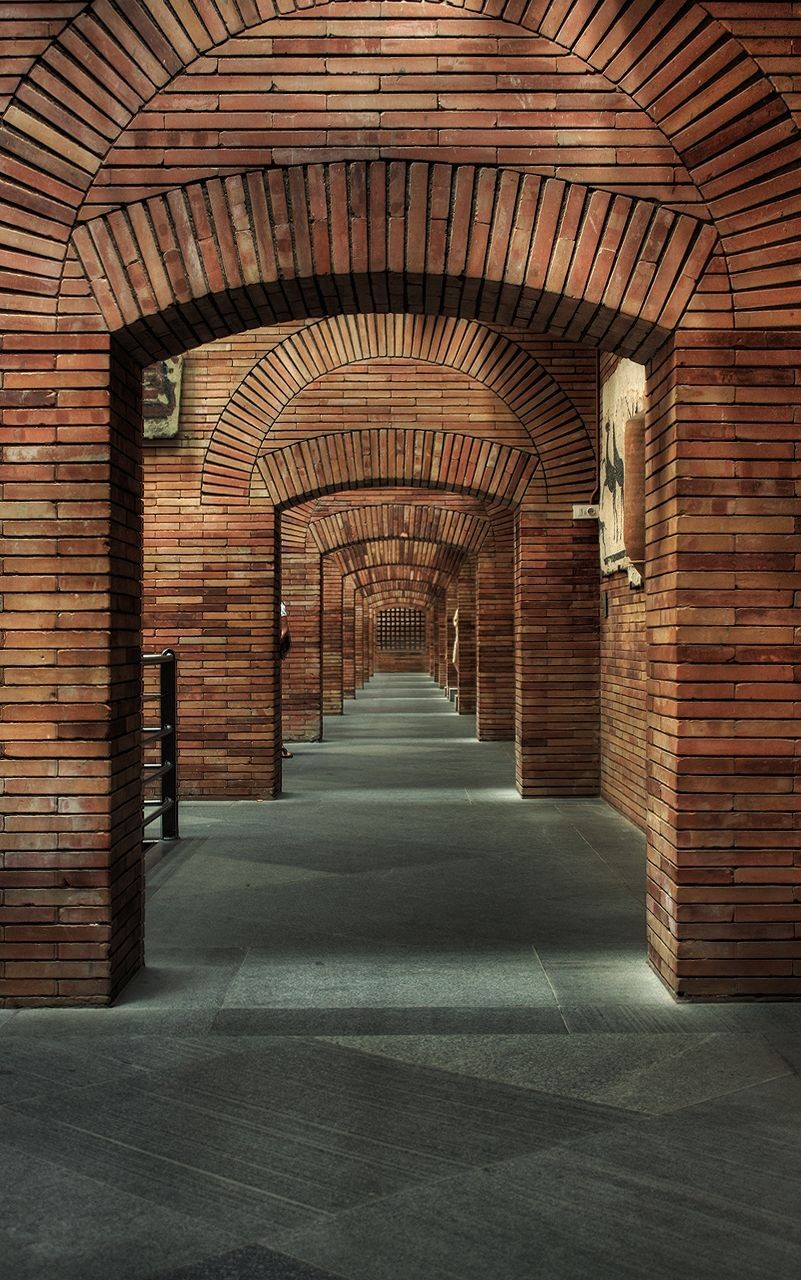 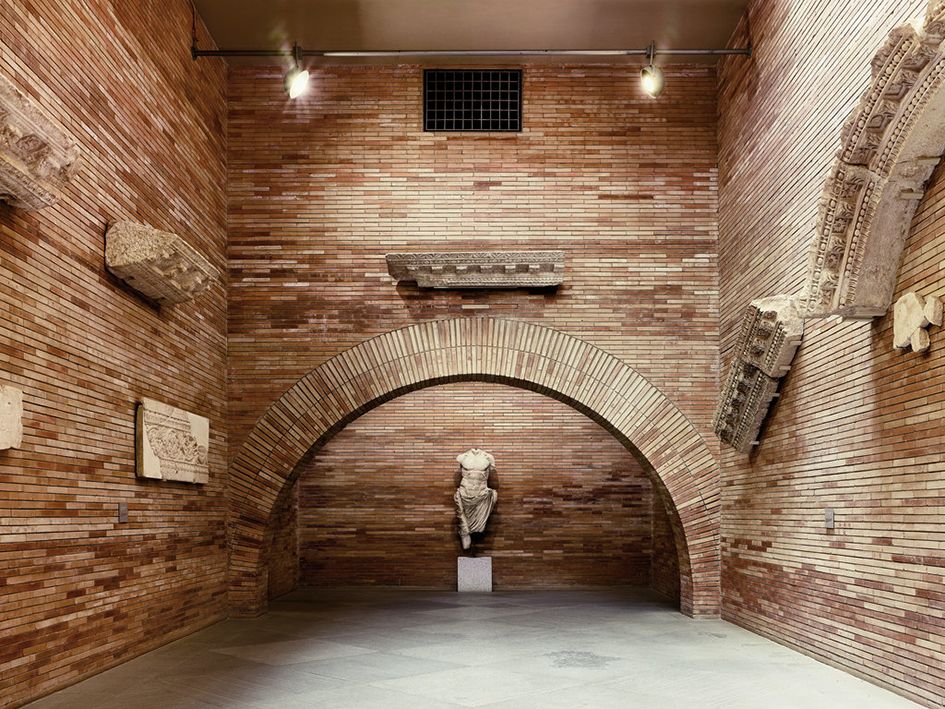 There’s a lot to love about this:  the high-arched hall that forms its spine, the mezzanines of galleries that line its side, a multitude of surprising and creative alcoves and atriums to discover, the intimate crypts below, and the finely tuned beams of light that perfectly highlight the beauty and mottled colours of all that brick.

Good stuff.  A bold design that grabs the eye and alludes to its contents and the ruins nearby without succumbing to being a copy, all while wrapped in those delicious layers upon layers of brick.

The National Museum of Roman Art by Rafael Moneo

A compendium of science fiction starships — all to scale! Quite amazing to look at.  The very real International Space Station (orbiting the earth right now!) is in the upper left hand corner in a yellow box for a true sense of size…

“The great instrument of moral good is the imagination.  If you cannot or will not imagine the results of your actions, there’s no way you can act morally or responsibly.  Little kids can’t do it; babies are morally monsters – completely greedy.  Their imagination has to be trained into foresight and empathy.”

“The writer’s pleasant duty, then, is to ply the reader’s imagination with the best and purest nourishment that it can absorb.” 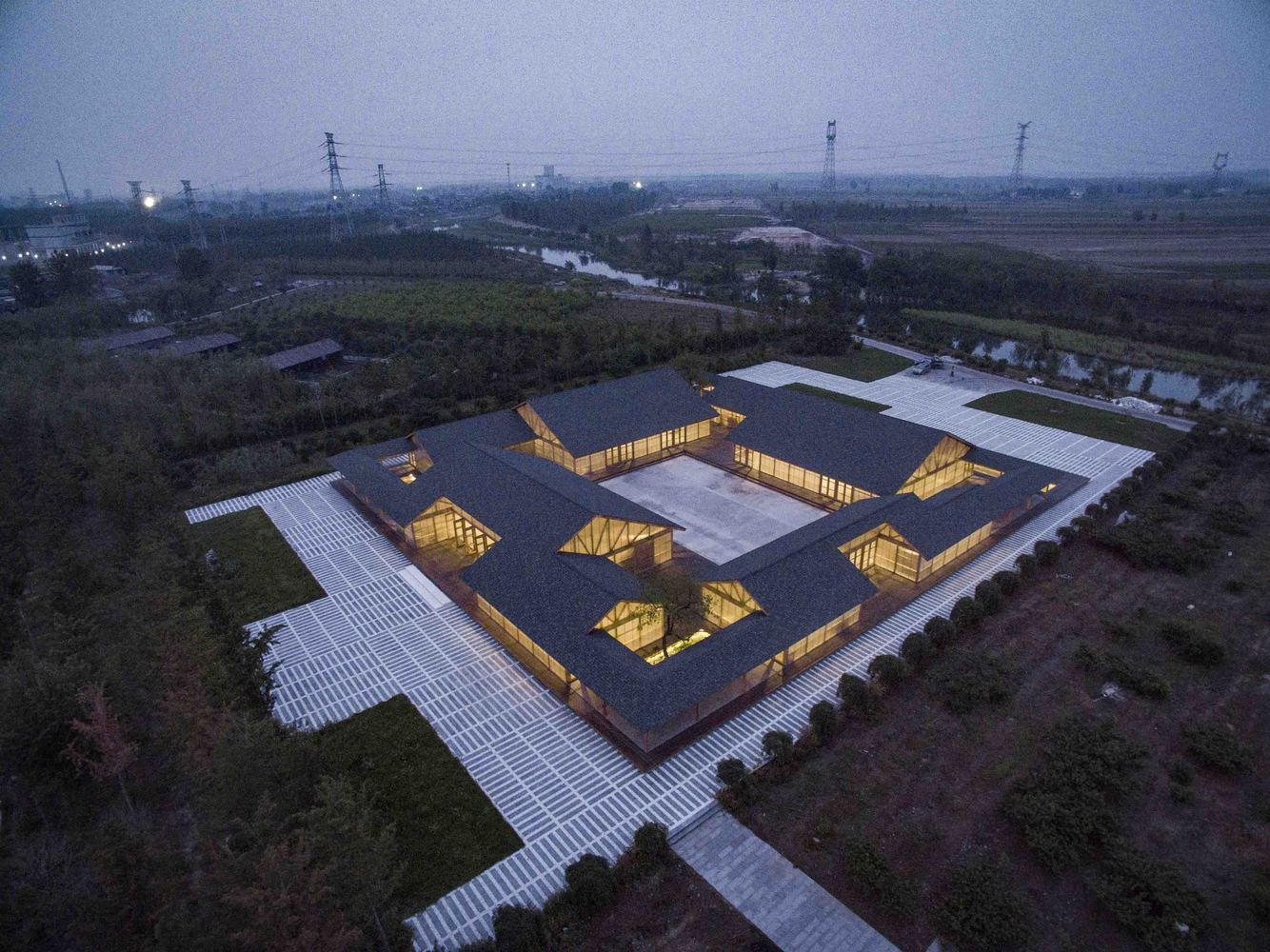 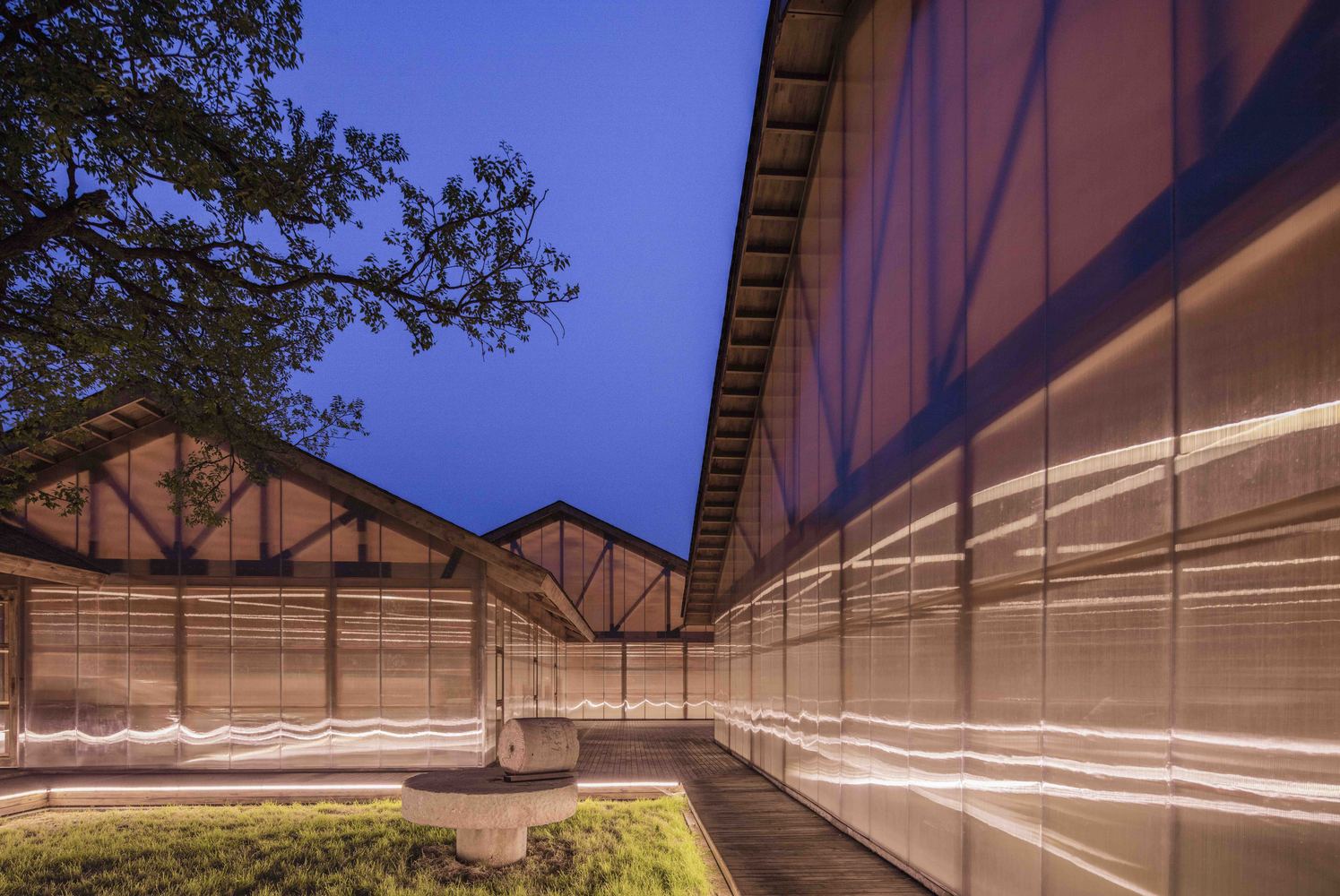 Alright, this is a nifty factory.  It takes a simple courtyard design, then pulls and warps the courtyards outward towards the corners to create, in essence, a courtyard surrounded by courtyards. This means that each of the four, independent, buildings that make up this cluster all get plenty of air, light, and views towards spaces of serenity. 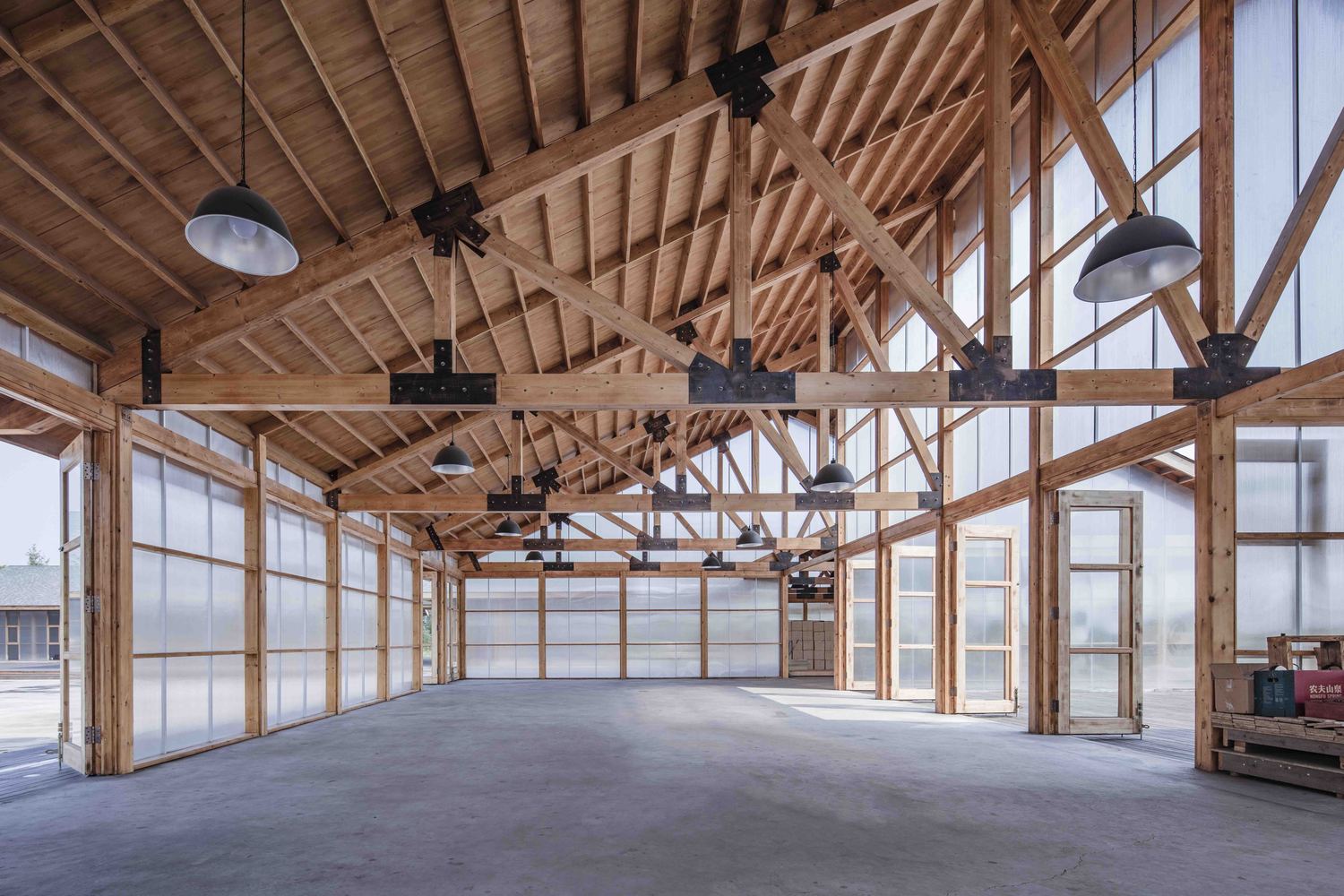 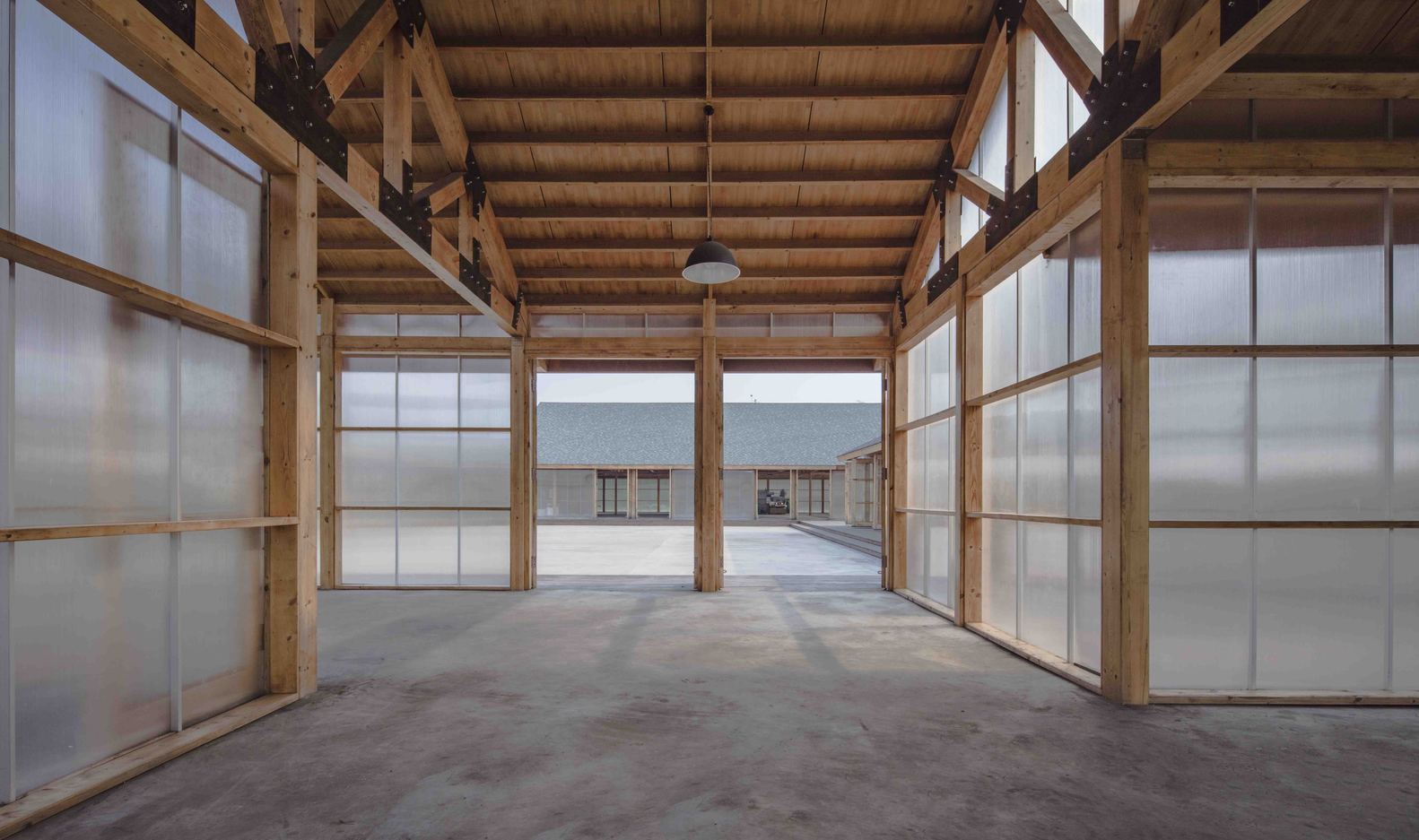 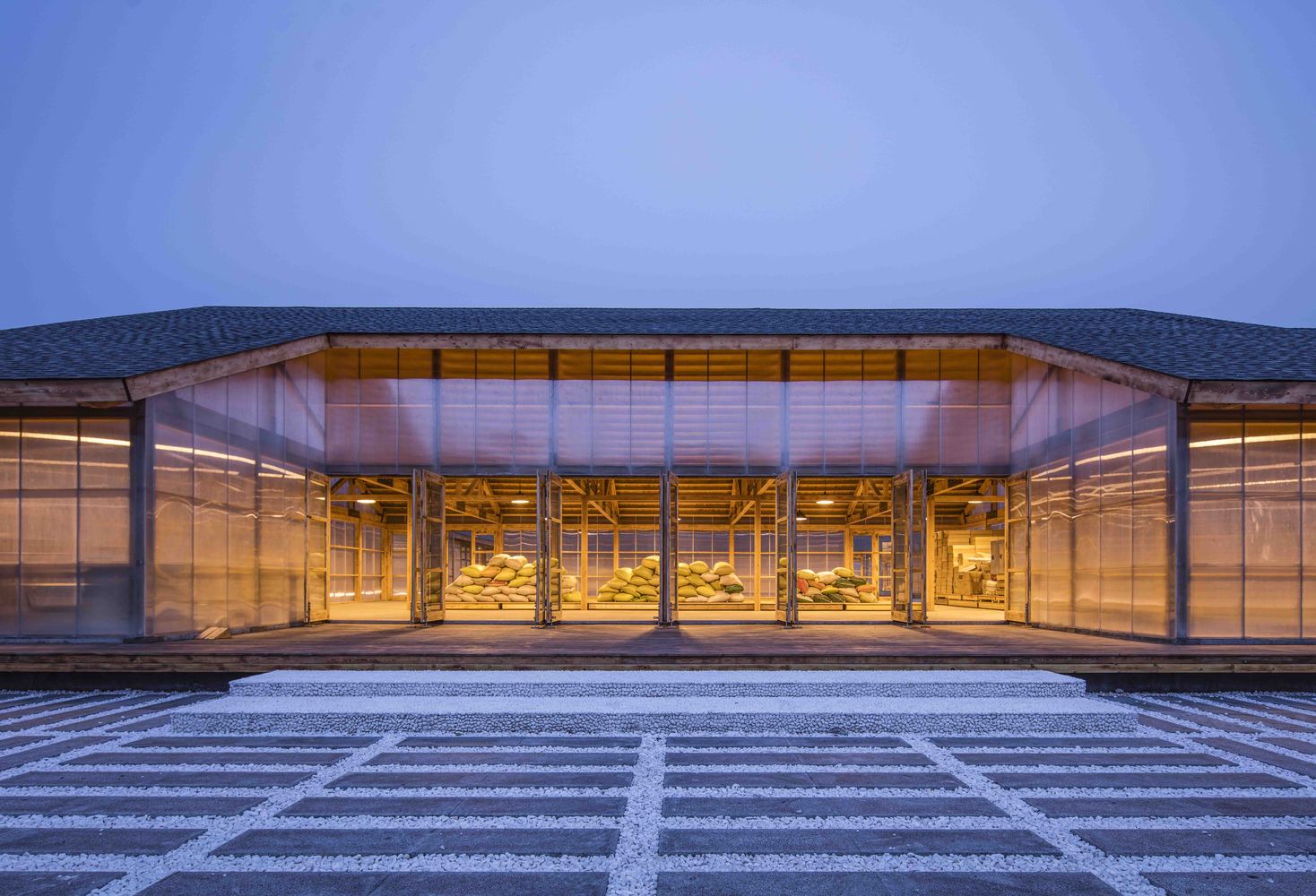 This is further enhanced by the translucent walls, lots and lots of doors, and high open trusses.  As the buildings twist around the courtyards, the milky panels let in a ton of sun without glare, and you’re never more than a short jaunt to a protected outdoor space when you need a breather.  Done on a budget, the materials are simple and durable, but put together with care. 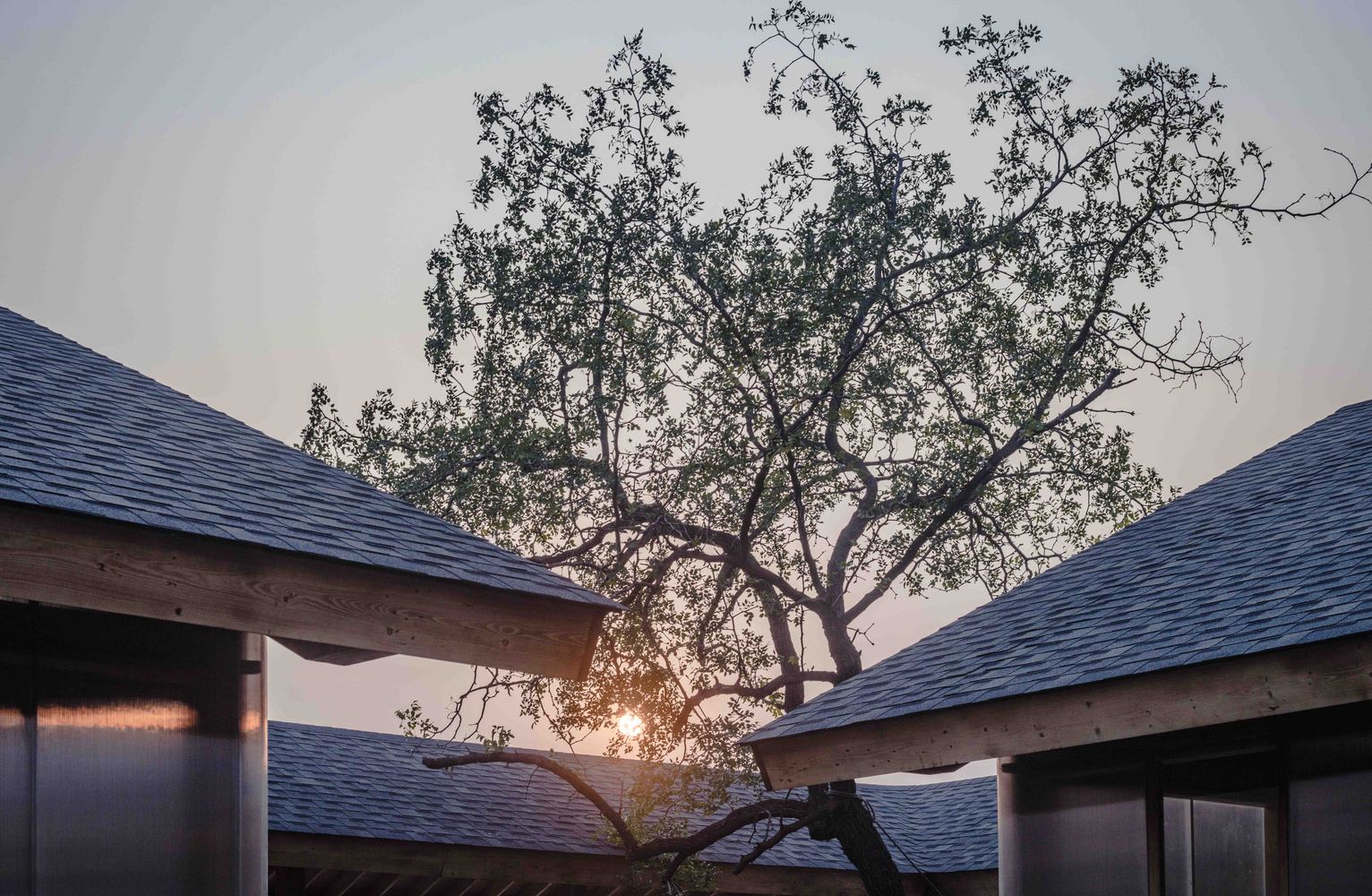 Every use or activity can be ensconced within mighty fine architecture.  This is no less true when that use is that of a factory or processing centre… and given how much of our lives we spend working, the spaces we work in are perhaps some of the most important spaces of all.

Some slow mo vids of sand on shaker tables!

(Taken at the Exploratorium yesterday)

“When you are kind to strangers,

you never know what it will mean to them,

but sometimes it means a great deal.” Oooo, this nice.  A former barn/shelter for goats, nestled against a cliffside, refinished with local materials, and expanded with a lovely addition, all to become a cottage available for travelers to rent.  With bonus sheep that graze right outside the doorstep! 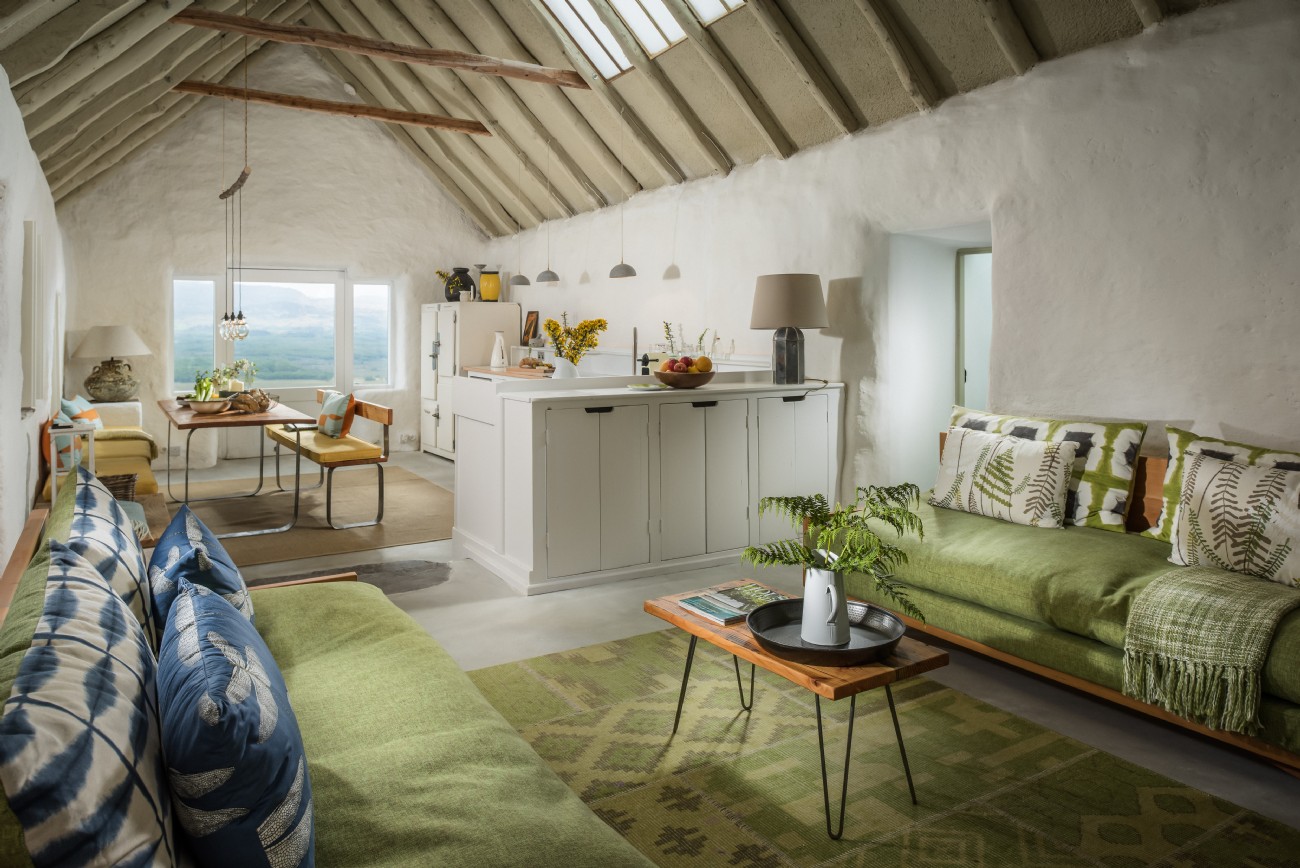 There’s lots to be said for the tactile beauty of rough plaster walls, and the feel of being ensconced within their thick confines.  Check out how the plaster curves to meet the doors and windows, accentuating the natural feel.  One long room divided only by furniture, the loftyness of the open rafter roof overhead coupled with the white walls make for a grand and glowing space in the day, and a cozy nestled up by the fireplace spot at night. 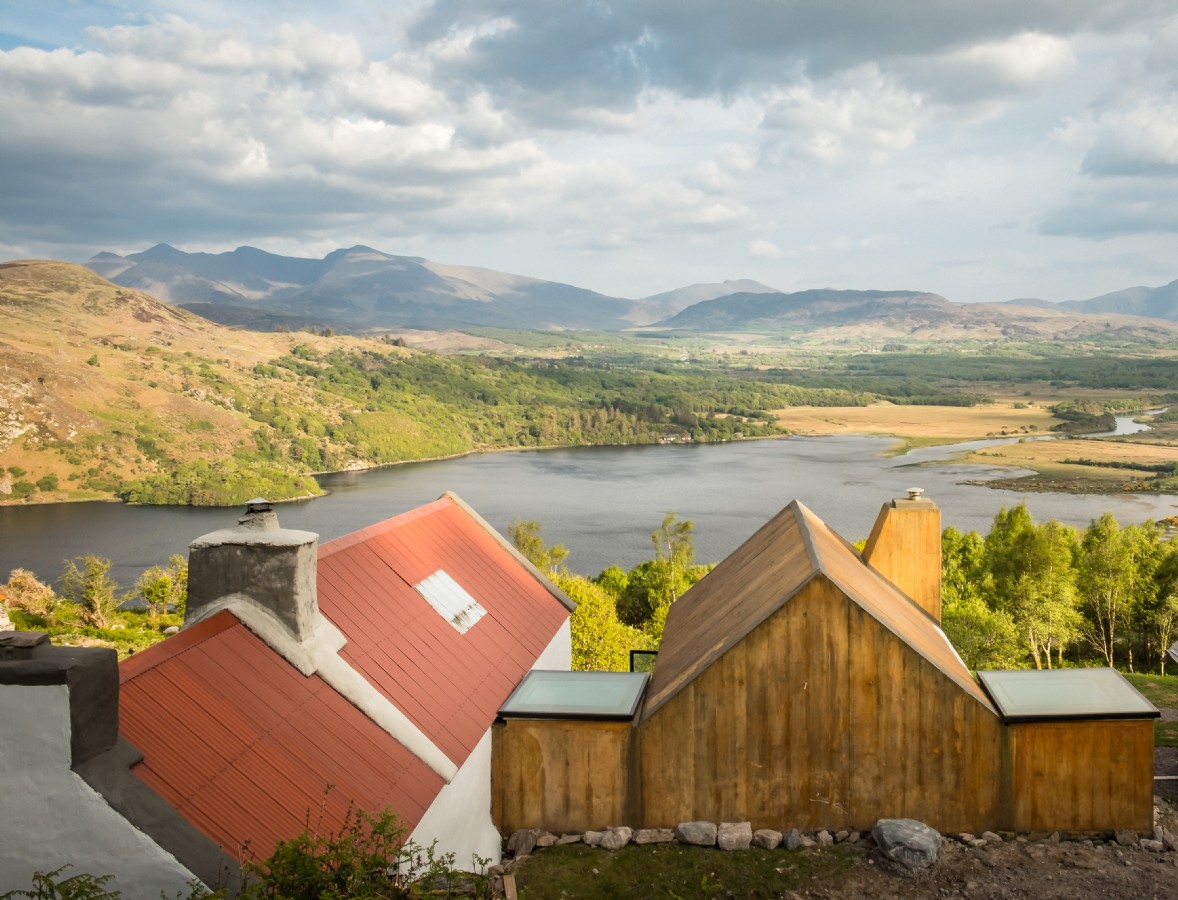 The new addition is also quite sweet.  Mirroring the cottage’s form without being a slavish copy, the rough, board formed and ground-coloured concrete fits nicely into the lush and earthy surroundings.  Even the chimney gets into the act, adding a nice fine point to the overall composition. 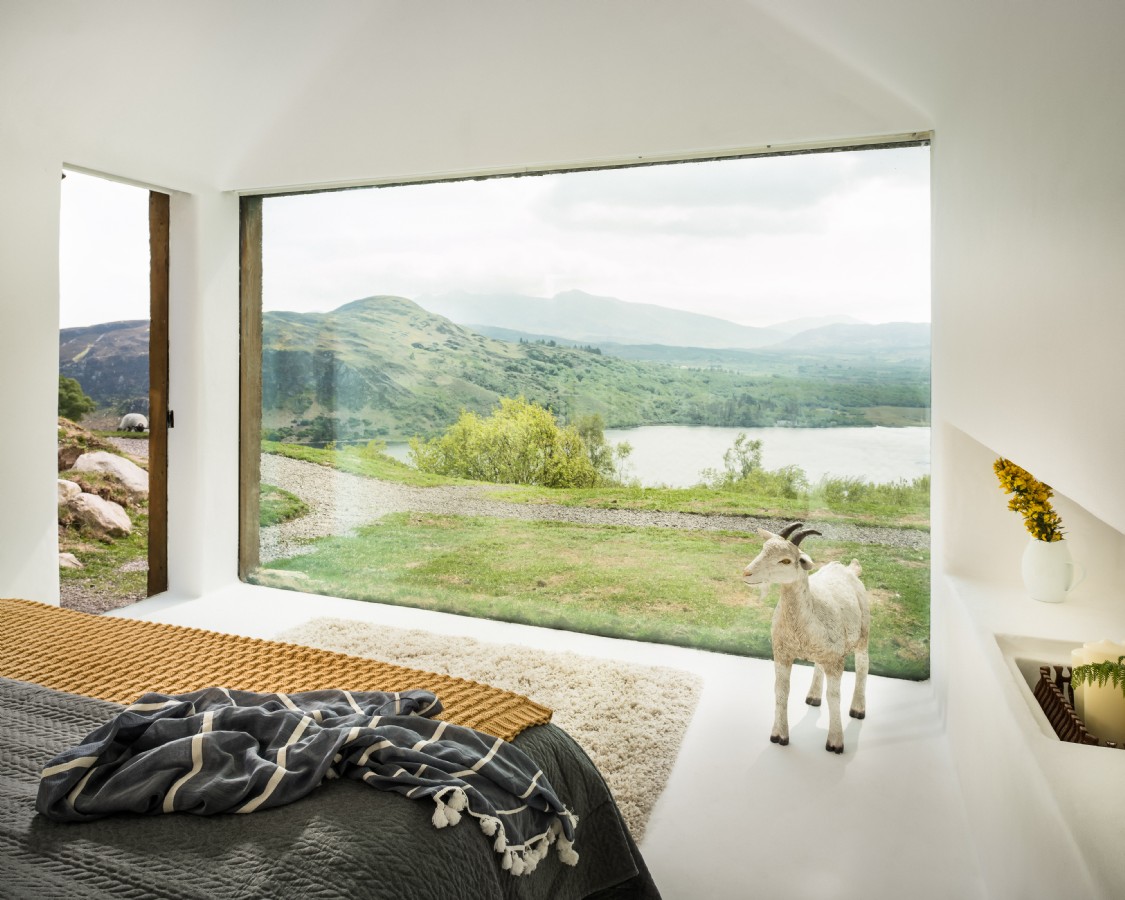 The view from the bedroom, wow.  And while that huge window by itself would be quite amazing, paring it with that smaller one in the corner adds that extra je ne sais quoi to make for an even more stunning experience.  The pure white (and again softly rounded) room also enhances the verdant colours, saturating the beauty of the surroundings. And those seemingly glazed side alcoves you may have noticed in the outside pictures?  One’s the entrance to the addition, and the other, well, I present to you a sunken tub with a perfect platform for sky and star gazing.

Nicely done, a fabulous example of adaptive reuse.  Lovely.  Adding it to my list of places to visit and stay.

If your hopes scatter like the dust across your track

I’ll be the moon that shines on your path

The sun may blind our eyes, I’ll pray the skies above

For snow to fall on the Sahara 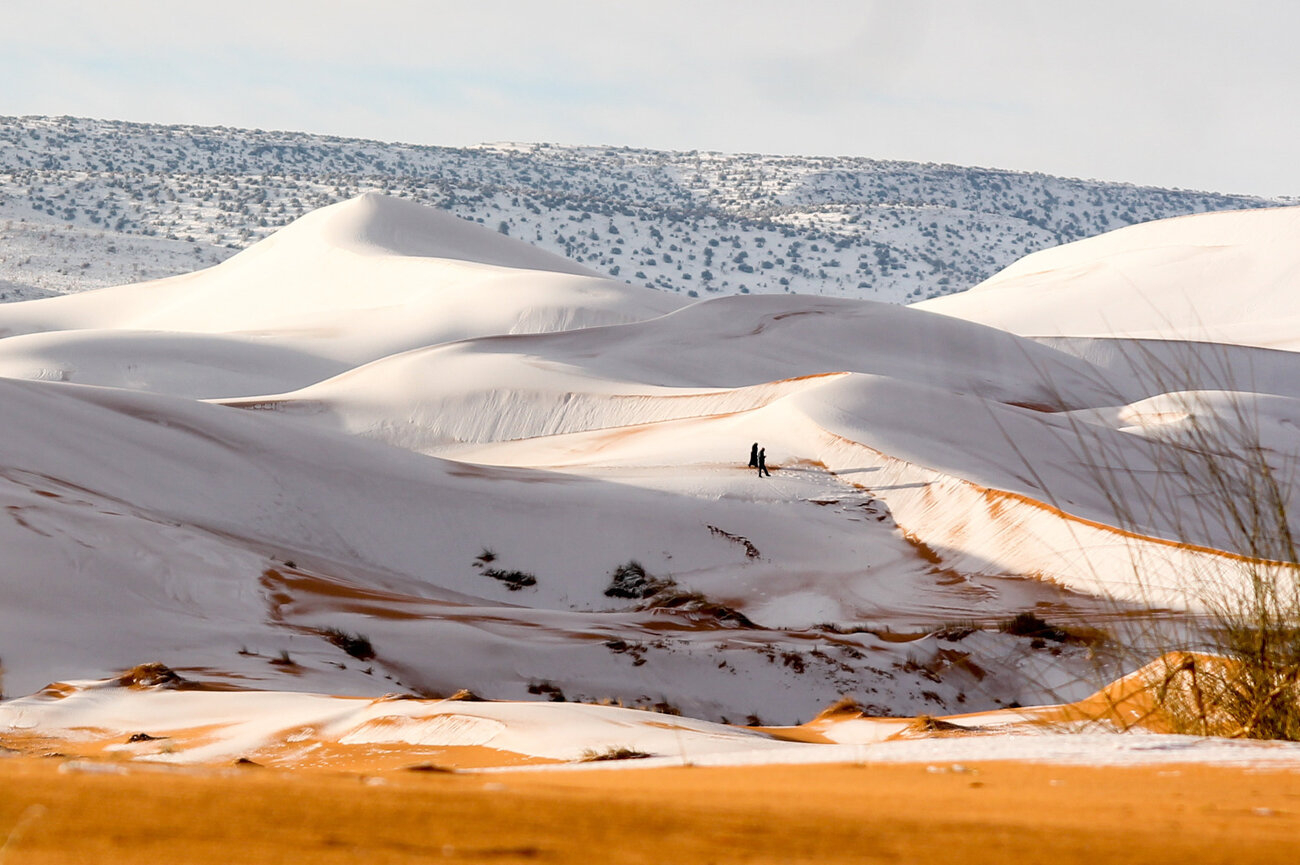 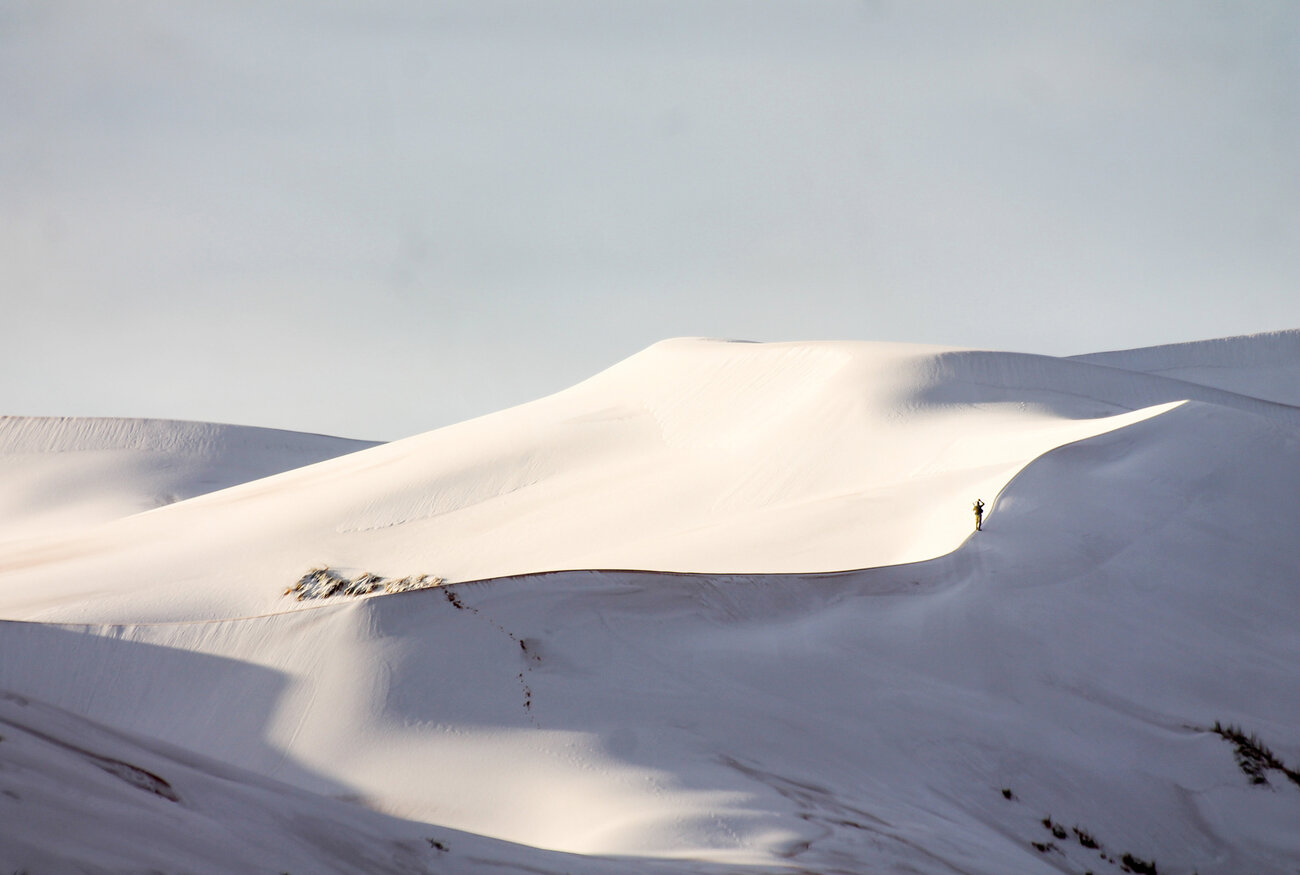 Surreal and amazing and fleeting and beautiful…