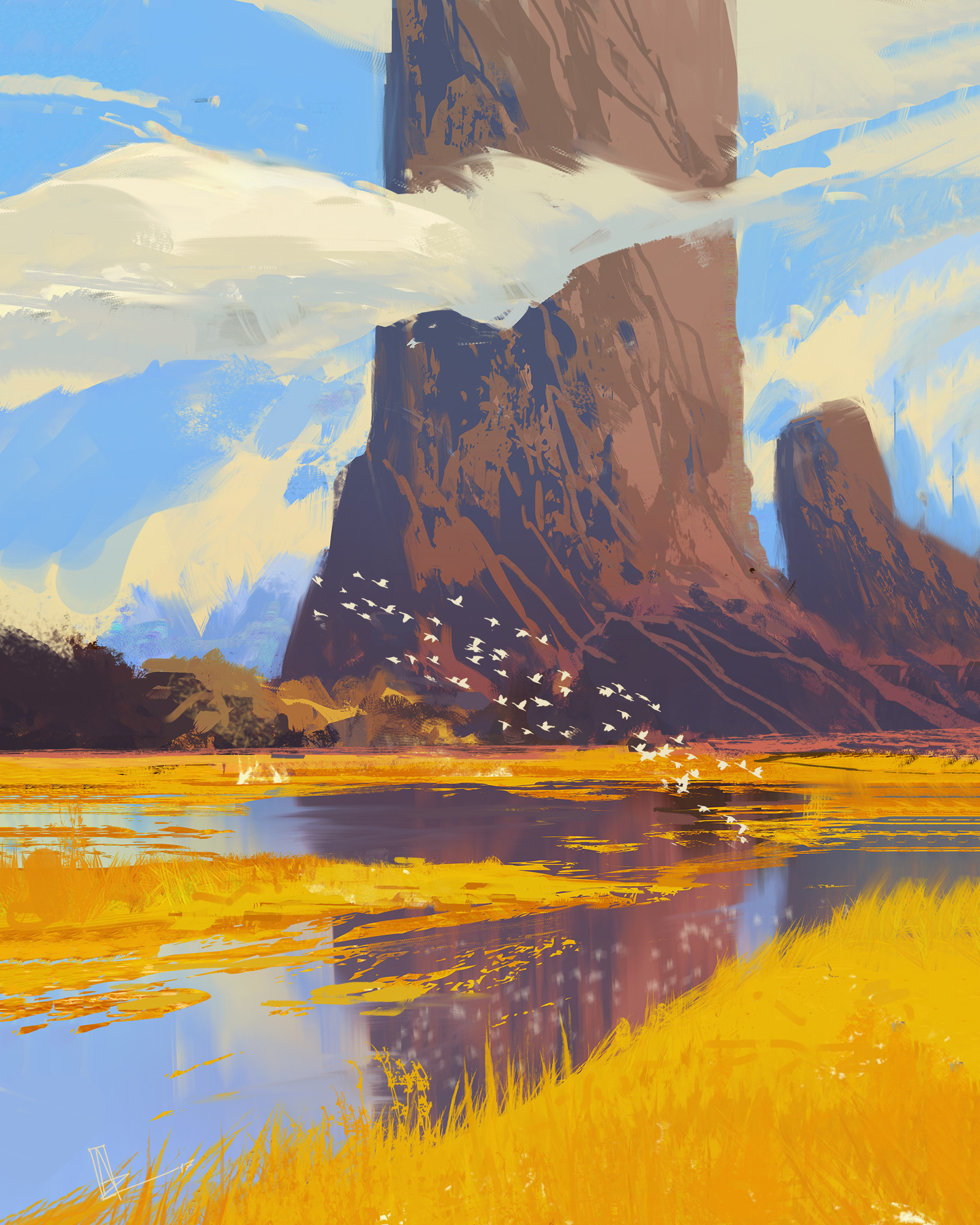 “It never even occurred to me to take Gorkon at his word.”

I’ve really been digging that expression, “it never even occurred to me,” of late.  There’s lots of insight packed behind it’s familiarity.  It is such an acute, apt, and accurate description of how our mind and, more importantly, our experience works inside of our worlds and worldviews.

It’s not “I couldn’t figure it out,” or “I didn’t choose to do that,” or “I missed it,” or anything similar… it is, literally, “This did not exist for me in any way, shape, or form, within my reality.”

It just doesn’t come up.  And so in the same way that it doesn’t even occur to us to step off a ledge over a gorge to walk to the other side (because we live in a world where gravity exists and ow), so too do we not attempt, or even think of, muse about, or have an inkling to do things that do not exist outside of [our; personal] reality.  Nothing hits our consciousness, nor do we take any unconscious decision/action in that vein.

It’s as though it completely doesn’t exist in the entire universe.

It could be about taking someone at their word, like Kirk.  Or a multitude of other things.  Asking a particular question. Trying something new.  Pursuing an opportunity we’d be fulfilled with.  Approaching someone to talk to them.  Speaking to our kids/friends/lovers/parents/boss/clients/etc in certain more productive, ways.  Trying out for a team.  Ending something that is detrimental to us.  Wearing certain clothes.  Letting someone else “win”.  Starting a hobby.

From the myriad of possibilities out there we get narrowed down to a paltry few that may hit our consciousness.  Like touching (or more aptly no longer touching) the hot stove, we live completely inside of that we see to be real.

This is where mindfulness can be such a boon, to delve into our stories and worldviews and open them up.  To create a larger sandbox to play inside of, to give ourselves freedom.  To let those possibilities and options show up.

And, next time, we get to choose.   Really choose.  Granting us power, self-expression, and a myriad of pathways towards the relatedness, peacefulness, creativity, and the fulfillment we all want. 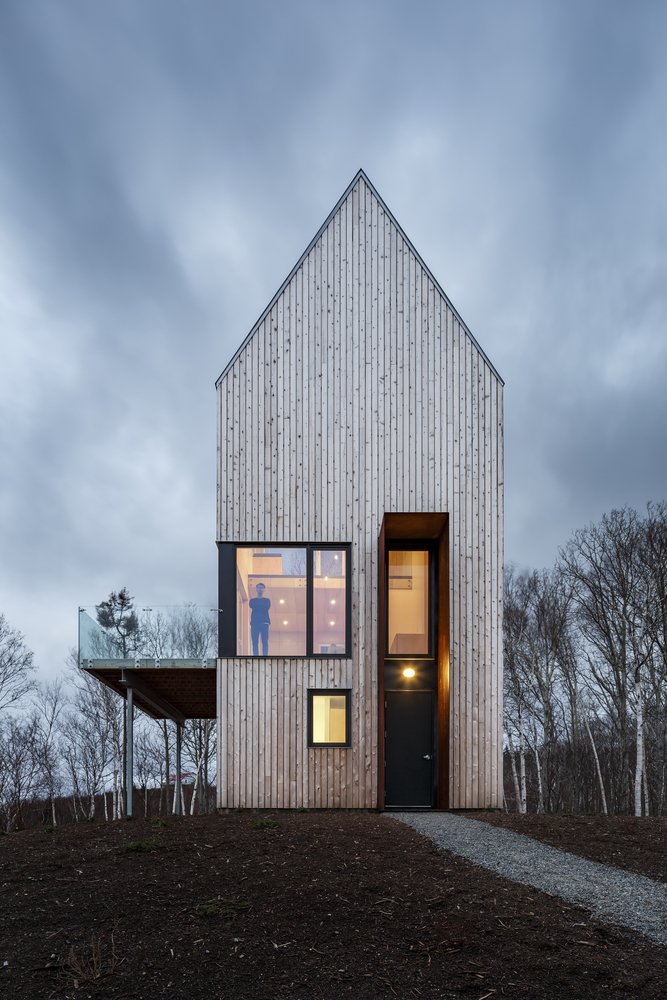 The first word that comes to mind in seeing this house is “lantern.”  Maybe because of the warm glow amongst the dramatic skies of northern Nova Scotia, but also because of its vertically stretched proportions making it appears it has been set, gingerly, down on the land.  It catches the eye and marks a place without needing to invade or dominate the landscape. 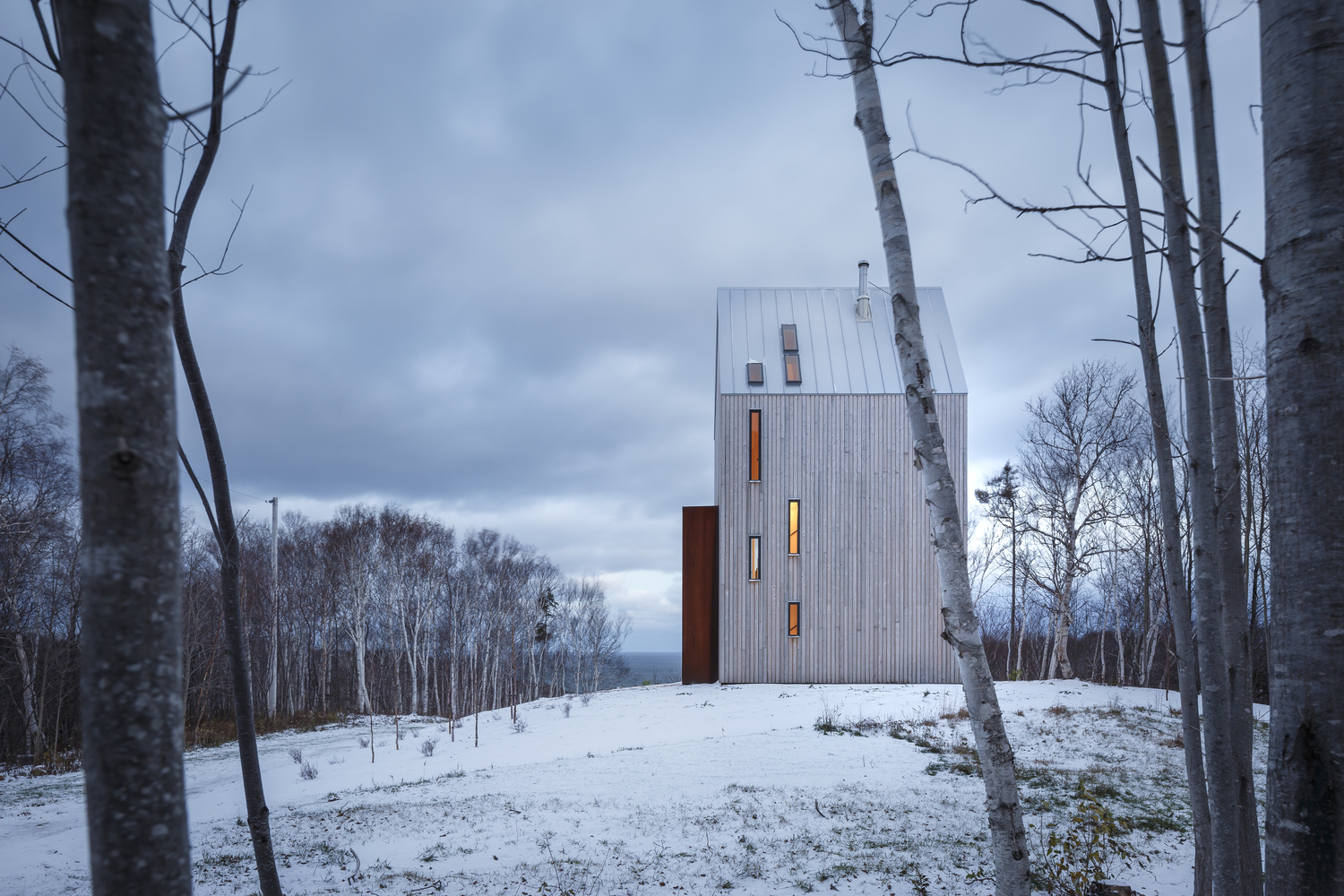 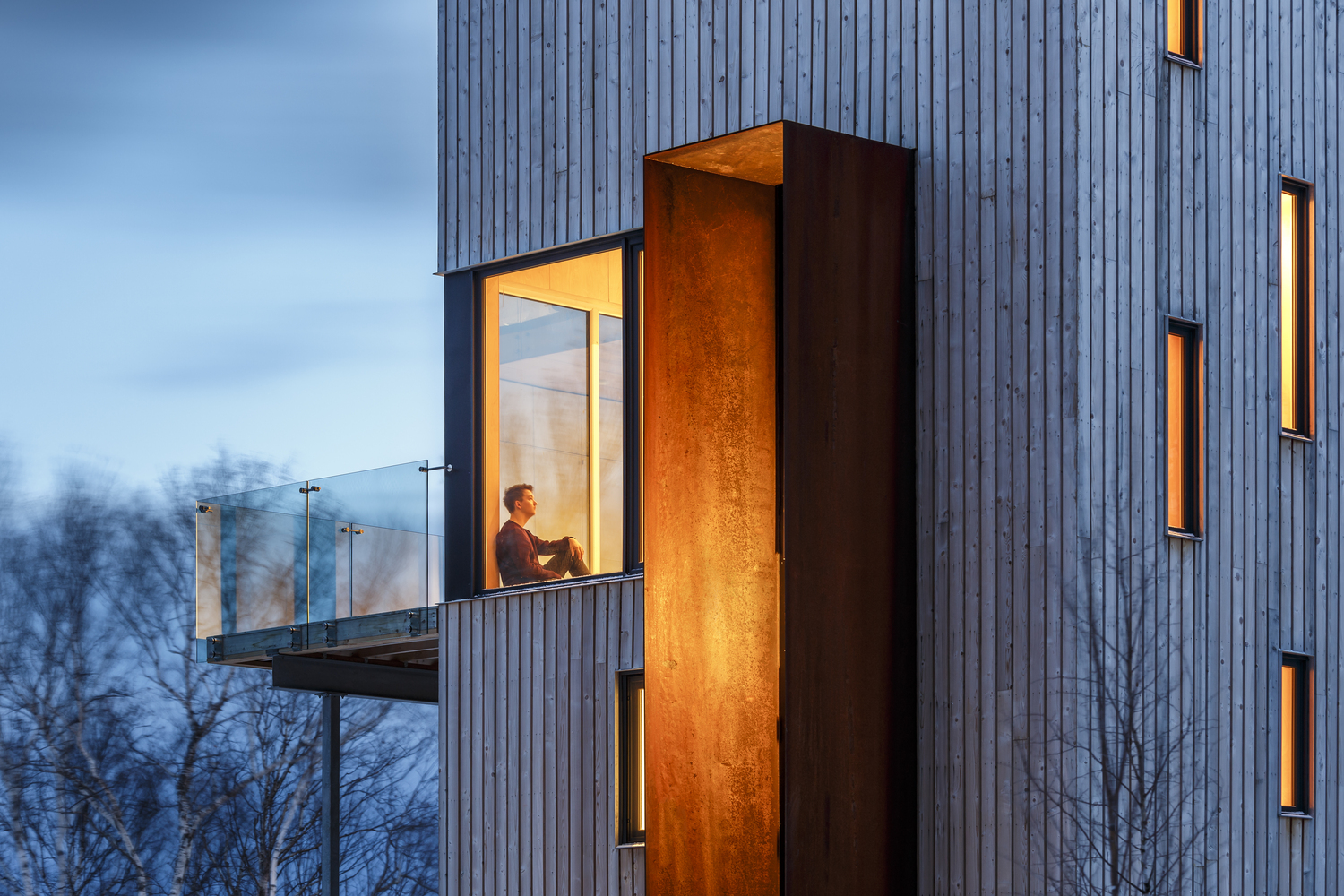 Surrounded by woods and with views of the Gulf of Saint Lawrence, the board pattern that adorns its face matches the trees that encompass it in both colour and thinness.  I love the updated interpretation of the traditional east-Canadian windbreak, rendered in heavy, rusting, steel that marries well with the marbled patina of the wood slats. 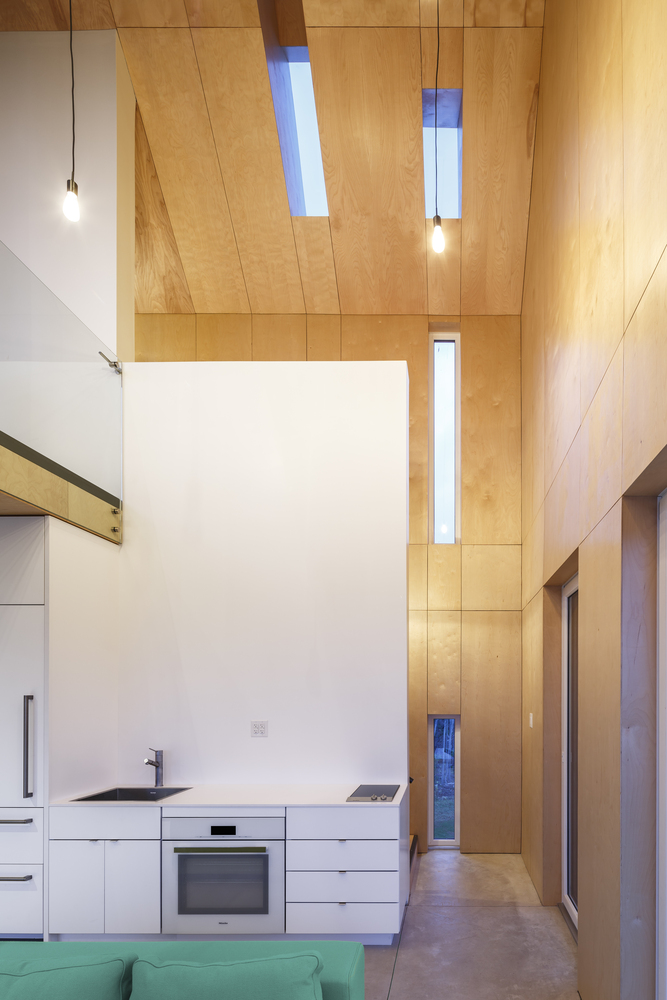 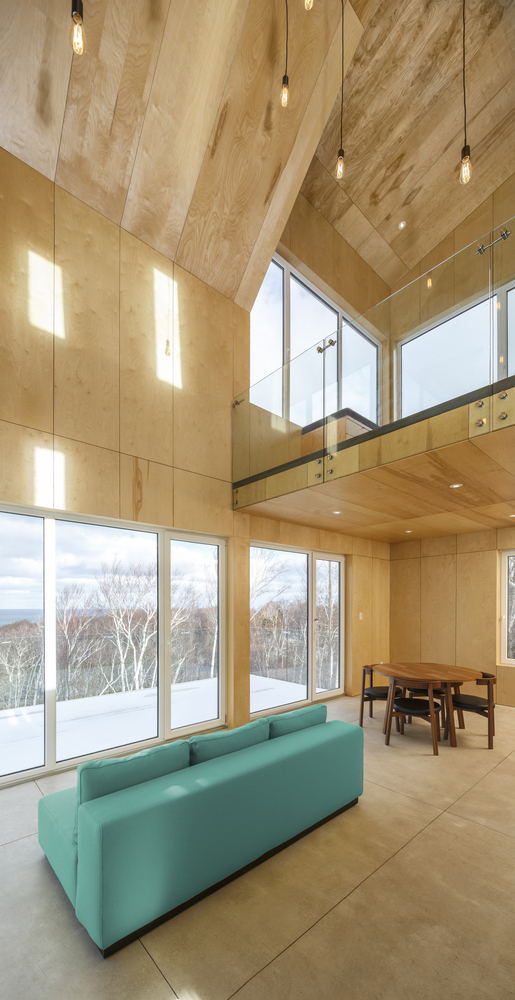 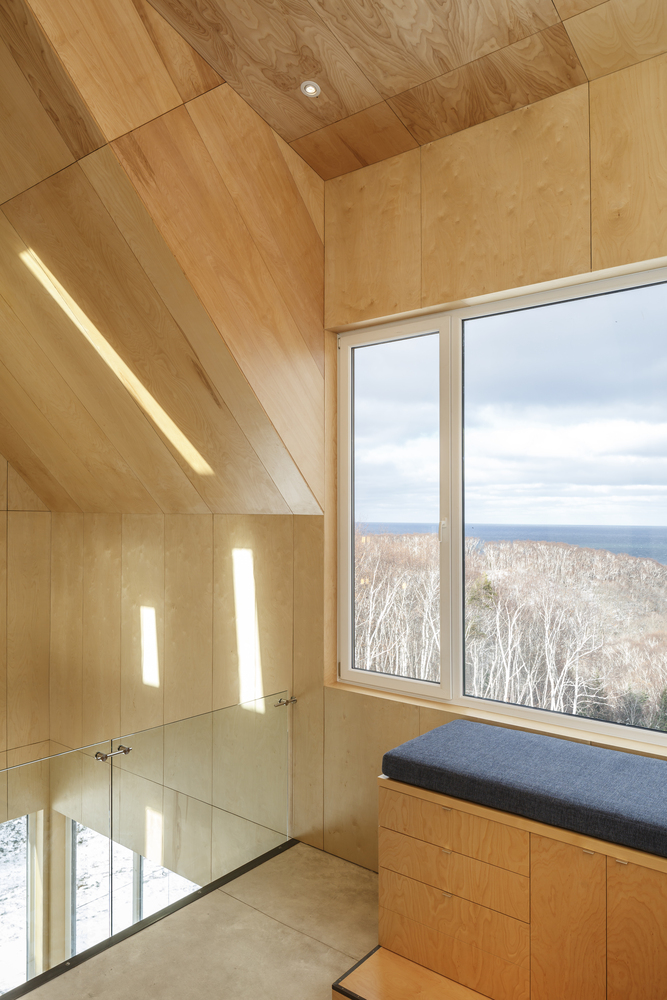 Inside, all that height is put to good use, with walls and a mezzanine becoming like freestanding objects within the lantern.  The narrow strips of window and skylights casting a playful air throughout the space, balancing the large windows that let the view flow out towards the water on the other.

Well proportioned, embracing vernacular architecture, and ensuring a light touch that nonetheless creates something special and a joy to be in.  My biggest add or alternate would have been to add a hearth.  Overall, a wonderful cabin retreat.

Rabbit Snare Gorge by Omar Gandhi Architect and Design Base 8

In the same vein as last week’s Star Trek Adventures, here is a flowchart/reference sheet/cheat sheet for the Mouse Guard RPG.  Given the unique way Mouse Guard works, there’s a lot that rides on each test, as there are so few of them.  Hence each test is rather involved.  Couple that with a rulebook that suffers from some organizational issues (such as having various aspects of the test procedure scattered throughout), this flowchart proved invaluable at our table.

In the end, once we got a handle on how it works, we ended up loving Mouse Guard (see my end-of-game reflection here).  We are stoked to play again, so our mouse adventures will continue!  If I update the sheet I’ll be sure to repost it.  And if you see anything that I erred on, please let me know and I’ll wrangle it right.

“Travel is a good thing.  You learn things when you travel, when you meet people out of your comfort zone from other cultures, you cannot help but learn and feel a certain [kinship], you see what you have in common with people around the world… that feels good.  And it can’t be anything but good for the world the more we meet each other and move around.”

Travelling (whether literally or just figuratively) outside of our comfort zones is rarely, well, comfortable.

Sometimes it can be thoroughly unpleasant.

Sometimes, though, it is also downright necessary. 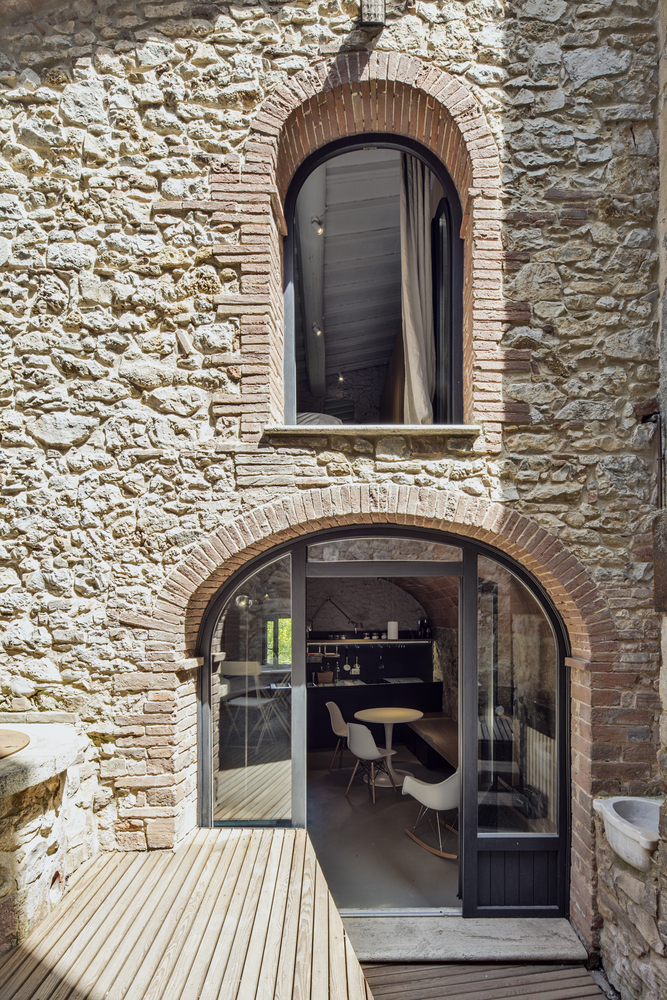 Constraints can be fun, for they remove the paralysis of the blank slate, and call forth creativity and invention.  This project certainly had both in spades; for one, it’s a renovation (and perhaps adaptive reuse?) of a lovely and quirky stone building in an Italian hillside town, and for two, it’s absolutely tiny.  And it’s an apartment.

Here’s what the existing conditions brought:  a lofty space made of richly textured walls that constrict the further in you go thanks to walls not aligning.  It also brought a floor level that was several steps below the equally small entry yard.  Into that context, the renovation begins with an elevated deck and fire pit in the entry space, coupled with extended brick and rusted steel walls to create a private courtyard. 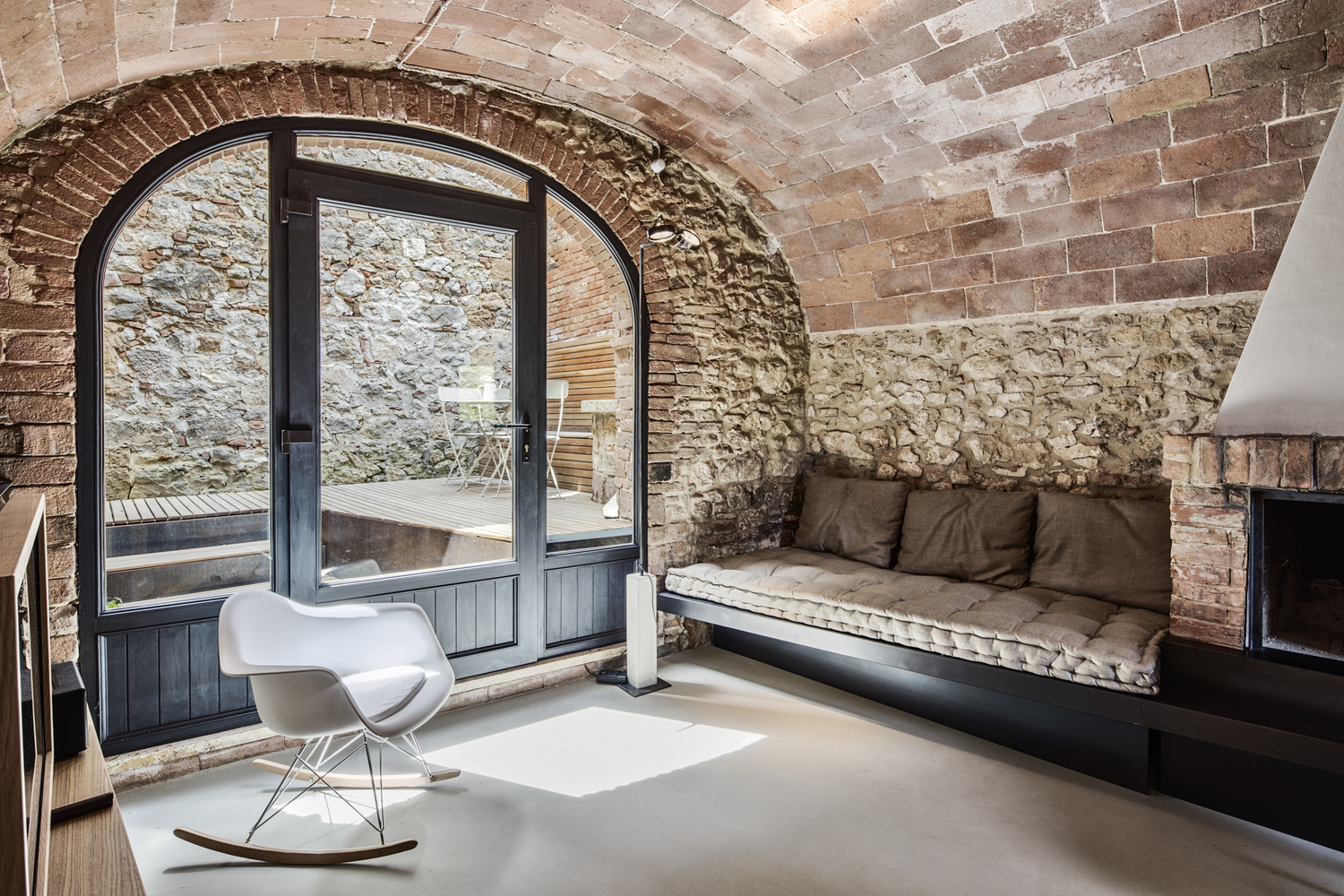 Inside, though, is a tonne of very cool additions and installations.  Most noticeably is the barrel vault that creates the second floor.  Much more than a flat ceiling would be, it maintains a sense of height (in what is not exactly a very high room) while also splitting the ground floor into different zones without walls or encroaching on the limited floor space.  Adding to this feel are the bits of built-in furniture and cabinets, especially the sofa/mantlepiece/fireplace that extends to accentuate the angular shape of the room. 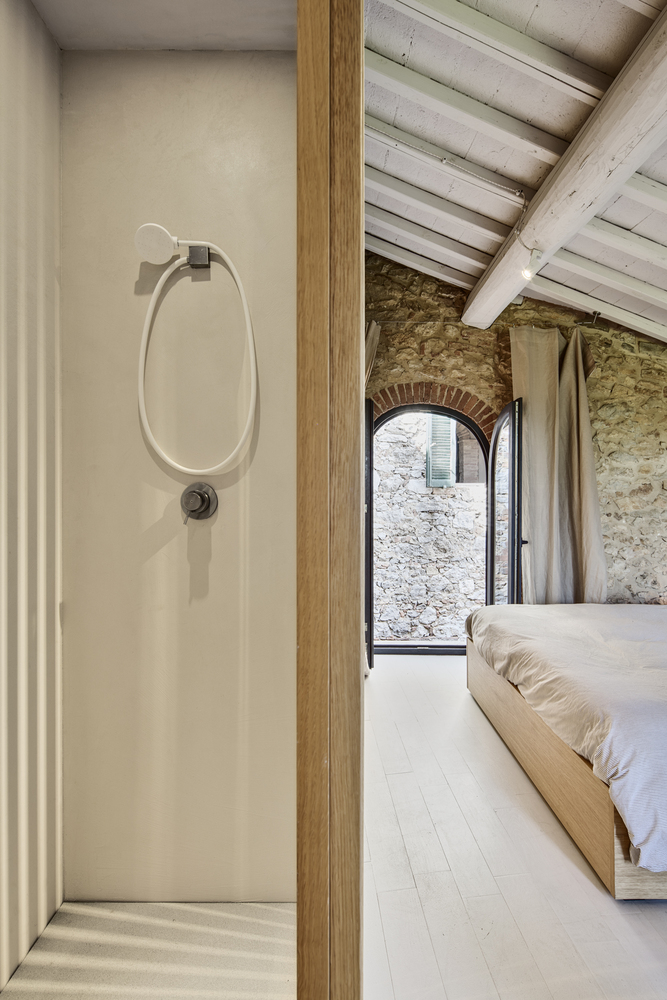 Up the spiral staircase, a thickened closet becomes a restroom and shower, while on the opposite, angled, wall, the headboard grows in thickness to follow the closet and create depth between itself and the angled wall.  Nicest of all is the freestanding sink and mirror, a statuesque object next to the window (itself with a sweet thick steel plate sill) overlooking the mountains beyond. 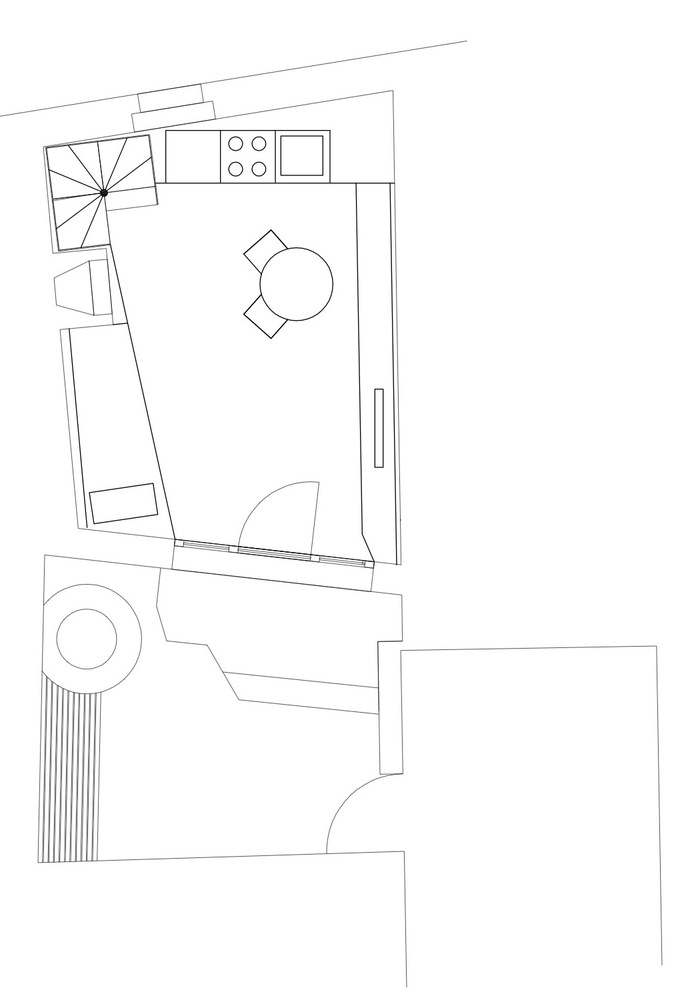 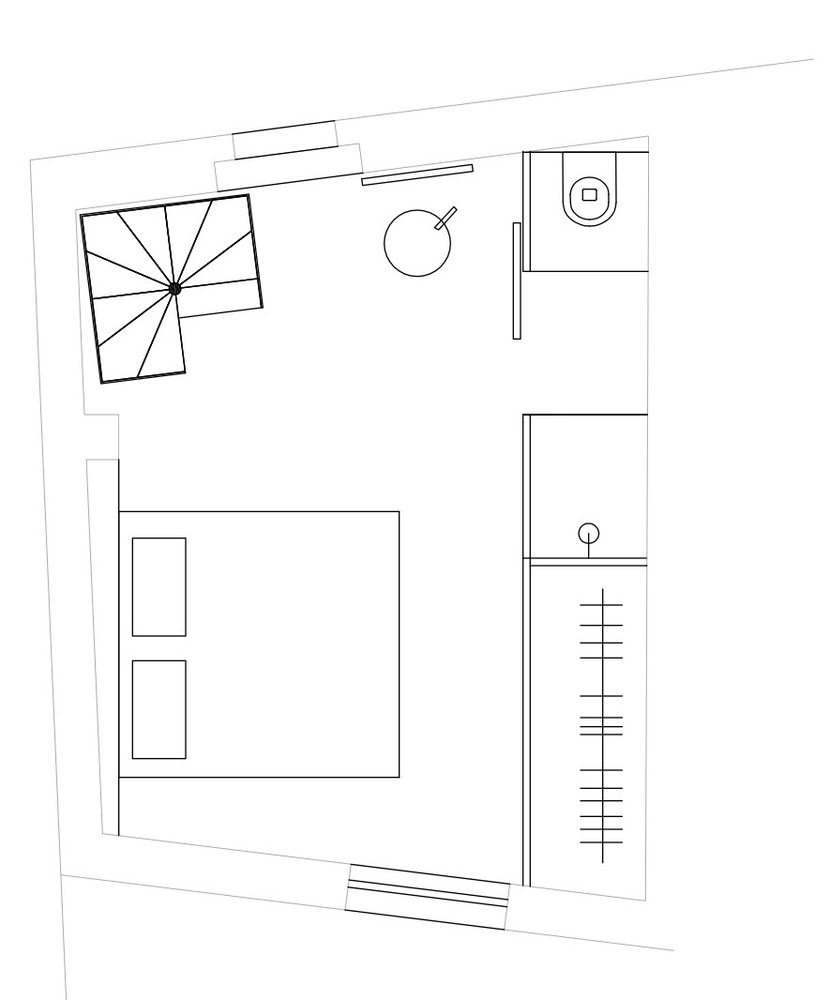 My only quibble would be with the exposed wiring, not for its exposedness, but for its seeming lack of care.  In a space where there is a lot of play between the beautiful existing stone and the slickly crafted additions, the wiring occupies an awkward middle ground.

As noted a few months ago, our group’s been playing the Star Trek Adventures RPG by Modiphius.  We’ve been having a blast (it has allowed me to recreate/resurrect a character I love that I was playing some 20 years ago in the Star Trek RPG by Last Unicorn Games) and the system’s proving to be a pretty good one.  As is my wont, I’ve made these quick cheat sheets/GM Screen/rules references to help us along:

One thing to note, I didn’t include all the actions and options for starship combat, as I found this great set of sheets by Potato_Fishy that contained everything very well.  Otherwise, I tried to include pretty much everything that comes up often in play.

Hopefully this can be of use for your games as well.  If you see any errors or omissions, please let me know and I will update the sheet.  And if you’re not playing ST:A, I do recommend it!

I once forgot to pay rent.  Several days after it was due, I got a letter in the mail noting I was late, that there was a penalty, and that from there on forward I was to pay only by mail order or cashier’s cheque.

I became furious.  This was the first time I’d forgotten to pay the rent!  The requirements they were imposing seemed draconian!  It was unfair!

Mostly, truth be told, I was furious at myself.  How could I possibly forget such a thing?  I’m a smart person!  I remember all sorts of things!  Knowledge is my identity!

I was still angry when I met up later with a friend to do some work.  I knew I wouldn’t be able to get anything done (or do anything right) in that state, so I told them the whole tale.

And they laughed.  And it wasn’t one of those “I’m laughing with you” kind of laughs… they were definitively laughing at me.

That didn’t appease my anger one bit.  “What is so funny?”

“Are you human?” came their reply.

“And do humans sometimes forget things?”

I knew, immediately, I was busted.

Or, more precisely, my calculating self, so full of fury and self-importance, knew it was busted.

“Great.  Are you ready to give up your anger now?”

I fixed them with a stare.  My calculating self was not going to go down so easily.  “No.”

“Ok.  Let me know when you are.”  And they turned back down to their work.

It took me a few minutes more to stop taking myself so damn seriously.   The central self returned.

And with that the rest of the day went swimmingly.  As did my conversation with the office staff at the apartment, which resulted in them willingly waving all those ‘unfair’ conditions on my future payments.

It’s so funny* how wrapped up we can become in our identity, such that even the most human and common of things becomes a lighting rod and catalyst for upset, anger, blame throwing, casting aspersions, and more.  How vigorously we can work to defend something that doesn’t even need defending, how our clinging to a view (or views) brings down so much provocation.

And just how crappy that all feels.  How much it ruins our day (or longer).  How much time it can occupy.  And how much of a hindrance it is towards doing and completing that which we do want to do, and that would bring us joy.

The super funny thing is that it all felt so darn right to me.  Until that moment where, with their piercing question, my friend interrupted the calculating train there was nothing other than all the fury and unfairness.  Of course I should think that way.  Of course it was that way.

Developing mindfulness to catch those crazy trains is a wonderful thing, as is having a conductor like my friend who can split the cars and put the brakes on those same trains.  The deal isn’t to avoid or resist the calculating self and its train; the deal is to choose whether to get on or not, and even then (or if we discover our automatic decision was to get on…) we can still always choose when to get off.

Because wouldn’t you know it?  Things tend to be a lot more peaceful, a lot more clear, a lot more productive, and a lot more enjoyable when not caught careening on a runaway trip to Smashville.

* And I mean this with full honesty, no hidden sarcasm here:  I am truly fascinated by and find it hilarious how we humans sometimes operate, and how hijacked we can become.  If anything else in this story, I learned how endearing it can be to live inside of that world of “do humans sometimes…?”  It means a lot more love and relatedness towards others, myself, and the crazy communities we create and live in.