Well lookee here.  Springtime is around the corner, and Cirque is in with their latest show!  Titled Volta, I went in expecting nothing but electricity puns… OK natch, it’s a Cirque show, so I went in with many more expectations.  And the title doesn’t refer to electricity at all.  Nonetheless, let’s plug in and see if Cirque amped themselves up for a high energy show or not.  Potential spoilers ahead!

There are three things that truly make Cirque shows awesome:  No subjugated animals, artistry and song and theme and (sometimes) story blended together in amazing ways, and amazing human feats that can make your jaw drop to the floor in stupification.  Volta was no exception.  While there was only one act that seemed to break the laws of physics,* the acts were deliciously varied with many cool and creative moments.  There were some surprises too, with new twists added to acts we’ve seen in previous shows.

I was especially giddy for the dual-sided version of the Trampowall; having seen on video the Trampowall act in La Nouba (and the abbreviated version at Cirque’s performance at the Oscars in 2001), to see it live was a treat.  Doubly so due to that doubling of the trampolines, allowing for action to fly over the top of the wall in lovely, arcing, and choreographed couplets.  Other of my favourite acts include The Acro Lamp (flying single trapeze, where the trapeze is a lamp), a BMX and Ballet Duo (no kidding!), and the Hair Suspension, the one physics-breaking moment where a performer lifts off from lotus position to do a graceful and lovely aerial dance while suspended by her hair.  (!) 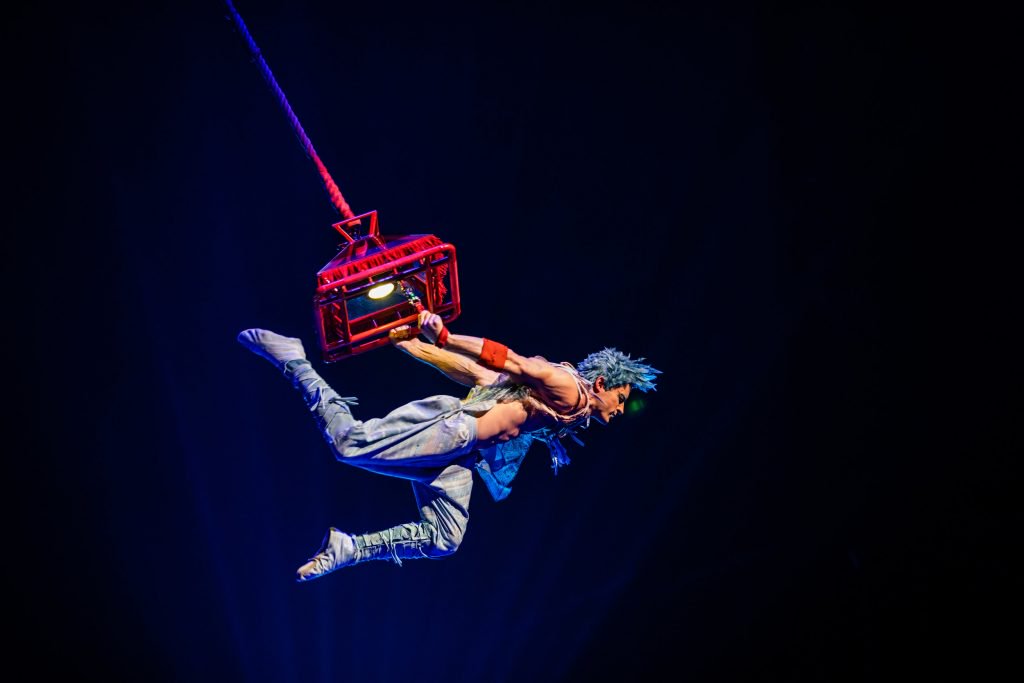 Even more so than the acts, for me it was the pageantry that really made Volta.  The choreography, the imagery, the set design, they all were excellent, and a few moments really moved me emotionally for reasons I’m not sure I could describe.  There were also several sudden moments of beauty, such as a hauntingly serene violin solo that emerged from the acrobatic frantic intensity to bridge to the next scene, or a scene where the main character dances with a troop all holding newspapers that flip and flutter in perfect compliment to their movements.  There many dance and dance-like scenes throughout the show, including the penultimate act which was all contemporary dance and which I really enjoyed.  Overall, I appreciated and loved many of the set pieces and I think the choreography was deliciously intricate and pulled off in excellent fashion.

The show started off a bit strange, featuring an over the top TV talent show format, and for a moment I was afraid that was going to be the conceit for the whole affair.  Fortunately, it was not, and soon that dissolved to flow into the story proper.  Now, few Cirque shows (Ka being the main exception) are very strong in their story, instead using theme to carry things through which, nicely, leaves things open to interpretation.  Volta leans more on story proper and attempts to spin a yarn regarding a boy named Waz on a journey of self-discovery and self-acceptance and it… kinda works.  While there are some most wonderful set pieces and moments that come out of the storyline, for me it never really gelled.  (Especially since it seemed to revolve around hair?  Though it turns out the hair is a representative metaphor?)  On the whole this is a minor niggle, but I think it would’ve been better served to either develop/show the storyline more prominently or to lean more back into theme.  As it is, it’s easy to get caught up trying to discern the story which can pull you out of the moment and from the spectacle.

The music for the show was composed by the lead artist behind M83, and as can be expected from that collaboration it had a lot of ambient atmosphere and long throws.  I enjoyed it a lot and am so going to snag the album.  As for the clown acts, there were two, and while neither are integrated into the story in any fashion the first was hilarious and absurd (and involved washing machines!).  The second just fell flat.

If nothing else, given that this is the 13th Cirque show I’ve seen live, and the 15th if you include the ones I’ve only seen on video, that I was still excited and loving it says plenty about how good Volta was.  Cirque remains a powerhouse.  I very much enjoyed the show, and it was hard to restrain myself from attempting acrobatic moves all the way home.  A great evening at the circus.

* I like to jokingly say Cirque shows are very high in IAPH – Impossible Acts Per Hour.