Let’s slide over to Norway and check out another grand city hall (and location for the Nobel Peace Prize ceremony and banquet), the Oslo Rådhuset. 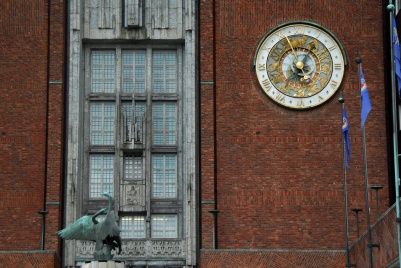 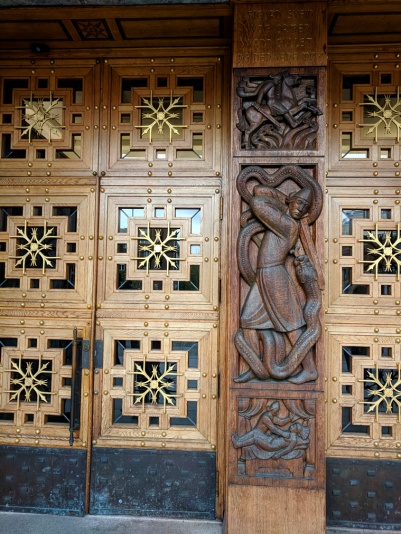 Much like the one in Stockholm (and likely/clearly influenced by it – one of the judges of the Oslo city hall competition was the architect for the Stockholm city hall), the building is nifty mix of art-nouveau expressive sculptural elements adorning the crisper lines of brick functionalism.  Coming in, the two towers and arcades reach out to welcome you as you come up to the main façade, dotted with flourishes including sculpture, ornamental molding, patterns in the brick, and a very nifty astronomical clock.

Besides possessing large clerestory windows to admit light from above, the main hall inside takes a very different tack than the one at the Stockholm city hall.  From wall to wall to wall it’s covered in colourful and very cool paintings that depict the history of Oslo and its people.  And, of course, there’s a grand staircase for grand entrances during the Nobel ceremonies.   (For the 360~ view, click here)

And best of all, yes, a there is a pipe organ here too!

We didn’t take a tour this time, so we didn’t see into any of the other halls, meeting rooms, or the council chambers, alas.  Nevertheless, it is a mighty fine and unique design that makes for a great civic centre for the city.

The Oslo City Hall by Arnstein Arneberg and Magnus Poulsson.