At the yell of “Go!” we pulled the Trojan Horse beyond the gates of Troy. 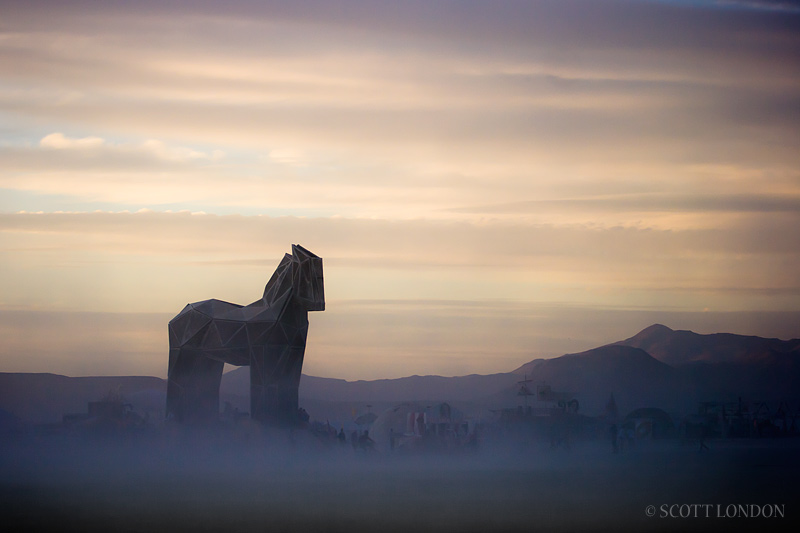 Ok, natch, it wasn’t the actual Trojan horse, nor were we anywhere near Troy.  We were standing on dusty ground at Burning Man, but there was a horse, and a big one at that.  Five stories tall, made of wood and nails and paint and weighing in at some 40,000 lbs.  It was something.  And we were about to pull it.  Hundreds of us, spread out over six ropes affixed to its base, with me an orange robed figure melding within the crowd.

In my mind, I knew how this was going to go:  we would begin pulling, the horse might rock a bit, then it would begin moving, slowly at first, gradually picking up steam as we struggled and pulled with all our might against its weight and the wheels sinking into the sandy playa.  I readied myself.  The signal was given.  I gripped the rope and… Just walked.  Like nothing was there.  I looked back – had something gone wrong?  Nope.  The horse was following us, as easily as a toy being pulled on a string.  What?

Turns out when you have hundreds of people, the load divides out to be individually a pretty small number.  As soon as we pulled the horse leapt forward with no hesitation and no ramp up in speed.  We were generating thousands upon thousands of pounds of force.  Collectively, we were mighty.

Ain’t that the truth?  In that moment it certainly became viscerally clear for me in a way that it hadn’t been before.  Our greatest strength as a species is our capacity for collaboration.  When we (whether willingly or unwittingly) align our actions, we produce immense results.

Again, ain’t that the truth?  We can see it all around us.  In so many ways.  And inside of that, the phrase and the thought of “what I do doesn’t matter or won’t make a difference” immediately loses its air of veracity.  Because it’s almost never just a single “I” that’s acting there.  It is countless “I”s acting in inadvertent unison, producing an equally inadvertently outsized result.  And this goes for many things, be it voting, or stewardship, or ‘norms’, or how we respond to challenges and adversities, and on and on all the way down to include how we treat each other when we go to the store.

“It’s just me” is often an illusion.  It’s a thousand me’s, a thousand us’, a collective of “I”s that together, through action or inaction can wreck and cause harm, but with a little intention and engagement can also move mountains.

(And giant horses too.)

One thought on “Philosophy Tuesday”