Both for the year and about the year…

It seemed appropriate, not that I take credit for the idea or pun… hope everyone has a safe and still fun day of dressing up!

Alas, I must confirm that some lynxes, like myself, do indeed need glasses.  Though I usually wear contacts…

Very fun video!  They also have it here in english.  Though I think the original french version is overall funnier, the paw action in the english version can’t be beat.

When we see someone (including ourselves!) exhibiting hypocrisy, especially that of the jaw-dropping kind, it’s not uncommon to wonder, “Wow.  How can they shift and switch their values and beliefs so drastically?”

But here’s the thing:  they didn’t, and they aren’t.  The truth of it is that they never held that value or belief in the first place.

There’s an ‘in order to’ happening here, something behind the supposed value or belief that is the actual driving force.  A different value or belief, one that is usually non-virtuous in nature and that does not lead towards possibilities of a just, equitable, and loving world.  Instead it is a value or belief or ‘truth’ that is mired in identity, biases, and in rigidly narrow views about the world and those within it.

And often they themselves may not even be fully aware of it.  Cognitive dissonance, the fact we are rational vs rationalizing creatures, the whole nature of hidden biases (that’s why they’re called hidden, after all), all of these can be in play to keep it obfuscated from everyone involved.*

Of course, some are fully aware of it and just don’t care.  They willingly bear false witness to further their aims, trying to hoodwink everyone into missing their actual intent and harm(s).**

Regardless of its exact flavour, rather than get bogged down in engaging with their current value/belief of convenience we can instead step back and look at what their actions are accomplishing, and through that see what’s really going on.  We can discover what is the actual guiding force.

And then we can engage directly with that.

* Which is why it would be so refreshing if they were at least aware and honest about it, especially when it’s trying to justify really shitty behaviour.

** And it might be a combo of being partially aware and partially not – rationalizing it so supremely well for themselves that they feel it right even if they don’t fully realize or fully own what’s actually driving it.  Especially if this clashes with one of their morals that they also wield as a cudgel elsewhere!  Again, it’d be preferable for the pretense to drop and just say what’s actually there and actually going on.

There’s this local office building that’s been catching my eye as I’ve driven by it both while it was under construction and now that it is complete.  Finally stopped to take a walk around it!

At its heart it kinda follows the glass box typology, but in so many ways it is very far away from ever just being a box.  For one, it’s not just a box – a good half of it skews diagonally like a parallelogram.  For two, it is split in two – with each half getting a slightly different expression (while still using a similar language of black glass and steel with the addition of integrated sunshade blades) and the area where they meet being sculpturally demarked.  For three, it’s not just a mirrored surface of undifferentiated glass, with the steel frame being nicely detailed and sculpturally handled, using double mullions, different mullion depths, and those aforementioned sun shades to give it nice articulation, playing with composition enhanced by differing shadowlines.  (Similar in the way that the detailing of Mies van der Rohe’s TD or Seagram buildings make them lauded while other generic glass towers can easily be eyesores.)

All that is what caught my eye during the construction phases.  But what really catches the eye now is that remarkable glass artwork that sits prominently on its prow.  Abstract in its leafiness and rendered vibrant due to the black background, it really works well, avoiding feeling like a billboard or just some giant image slapped wantonly onto the building.  (Amusingly it is very much held onto the building like something resembling the support structure for a billboard!)  It’s a bit of art that manages well to feel like it’s a part of the building.

Architecture lives in our communities, and we live in it.  This isn’t what we might term a “major” or “glamourous” project, but it’s an err to think good design should only live there.  Good architecture is welcome everywhere and makes our built environment worth living in.  Good stuff.

223 North Mathilda Avenue by, unfortunately, designers unknown.  (I tried to find them but haven’t yet – I’ll keep looking!)

Looks lovely, a game where the intent is towards balance and harmony of the land and people.  I am also super excited that it comes with trilingual instructions.  I can’t read Inuktitut, but I love that they’re there!

Can’t wait to play, though, of course, given what’s going on right now… it’ll be a while before I can get together with someone to play.  Alas!  Until then I will dig into the rules and admire the lovely box (and maybe try playing against myself).

We all have these its in our lives where,

Whether in the foreground

Or in the background,

We cannot escape it,

No matter what ground we go to.

Yet when it comes up,

If we haven’t done the work

It is still there,

A barrier we constantly run into.

Even though we don’t think it is.

When there’s no room to put a town museum in the town proper… sometimes you can create new room!  In this case, by turning the building into a prominent and striking new bridge. 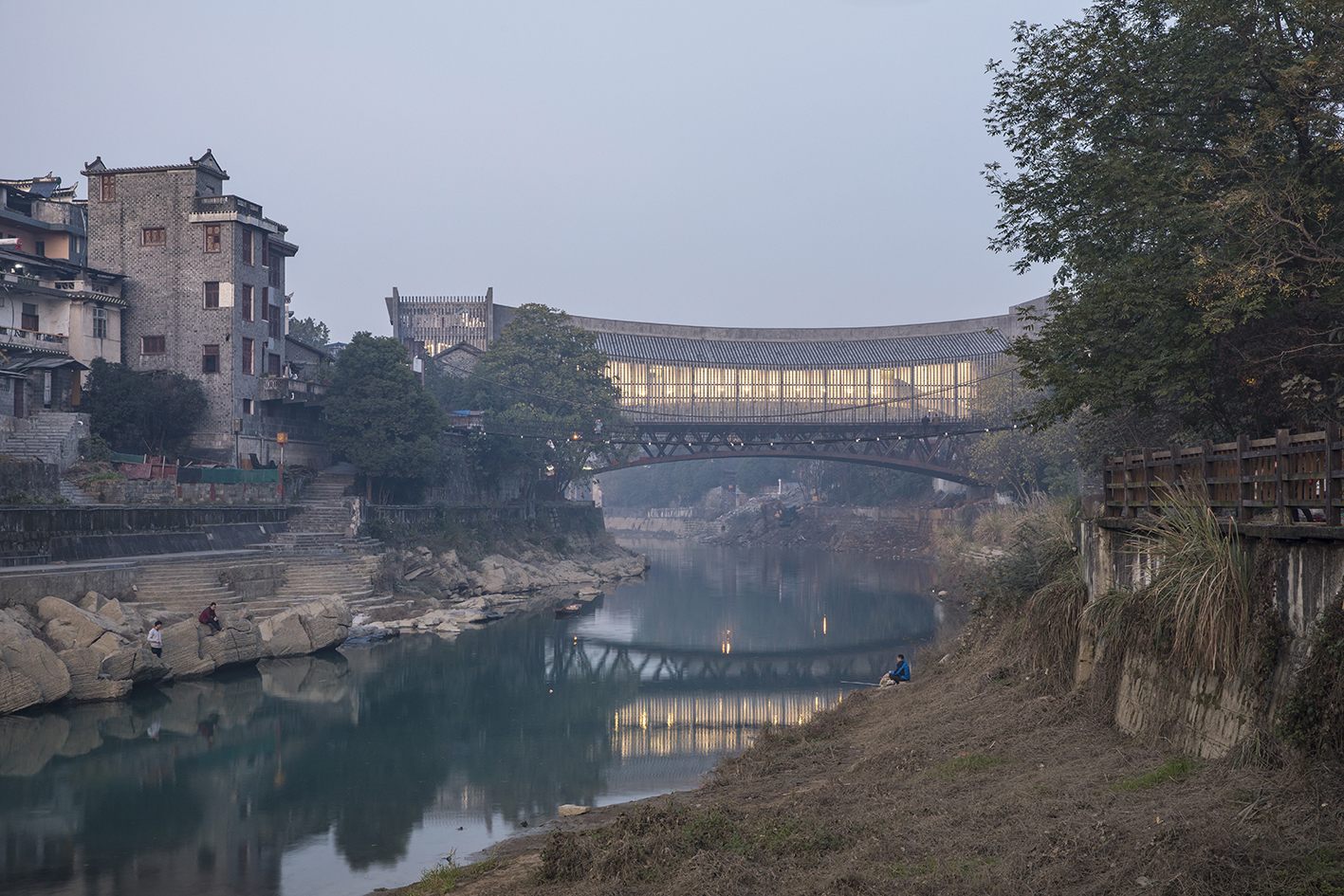 Overall, this is a nice fusion of the old surroundings with a new reinterpretation of form while also leveraging the country’s covered bridge tradition.  The ends securing the bridge are very much nestled within the existing housing stock that lines the river, which really lets the museum become a part of the town.  The galleries inside benefit from the unobstructed light and views, and as a nice bonus the whole thing also provides new (unrestricted, not part of the museum) pedestrian access over the river.

A bold solution to a site constraint that creates new community connection both in the form of the museum and in the literal crossing of the river.  Great stuff.

Playing over Discord during these physically distanced times has been working out quite well, albeit with the occasional moment of hacking something together. To whit, you might get a kick out of this map of an epic assault the crew recently did, as annotated realtime by me in Photoshop as our ‘battle map’…

It was quite effective and very fun to do, chronicling everything as we went forward.  And I am super amused at the end result in this crazy work of ‘art’.  BTW, that shuttle at the left side of the map?  It was sitting on the pad for the most of it, and I made great use of the layer transform tools to ‘animate’ it as the player inside piloting, fired the big guns (hence the giant cyan Xs on various bits), and then made their escape with all the kidnapped folk safely onboard…

Needless to say, a good time was had by all involved.

Look, I love me all sorts of fondue, but even I agree that last one is a good rule!

by Foxes in Love