“Look what you made me do,”

Is one of the classic lines by an abuser.

When spoken, it leaves no doubt: its’ abuse.

It can be surprising to notice just how many places it creeps up,

If not said so directly.

But if we listen, we can hear it,

And recognize the abuse happening therein. 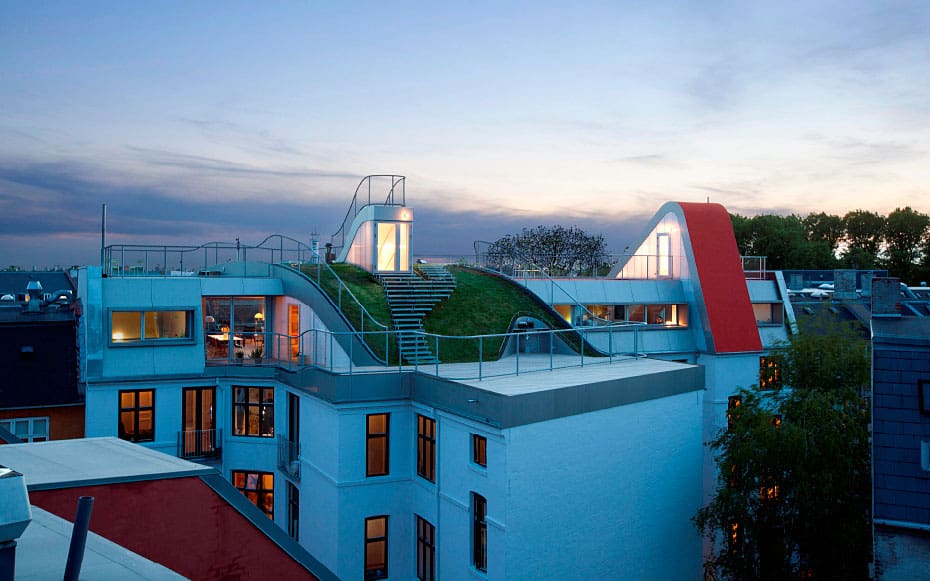 Oh this is neat!  A new trio of apartments to be added atop an existing building – but rather than just make the new units and call it a day, this project goes above (kinda literally) and beyond to create a new trio of public yards for everyone in the complex to use:  a play area, a couple of decks, and a grassy knoll.  And while that last one might seem like a joke, it is not!  Even further, it is crowned by an outlook to survey the city all around. 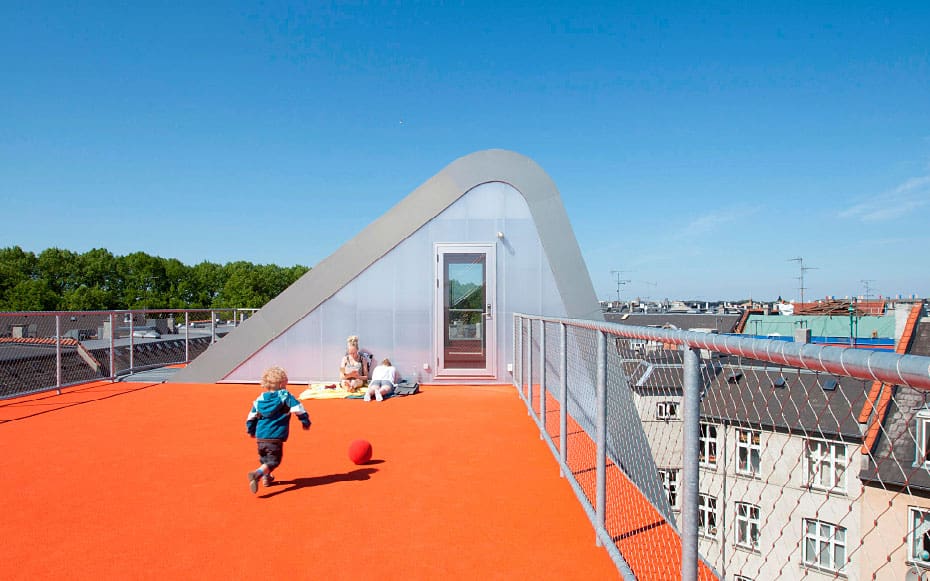 Very nifty, a cool addition to a dense Copenhagen neighborhood.

Hedonistic Rooftop Penthouses by… A ha!  Designed by the same firm who did the iceberg apartments I visited (and posted photos from here) while in Denmark, JDS. 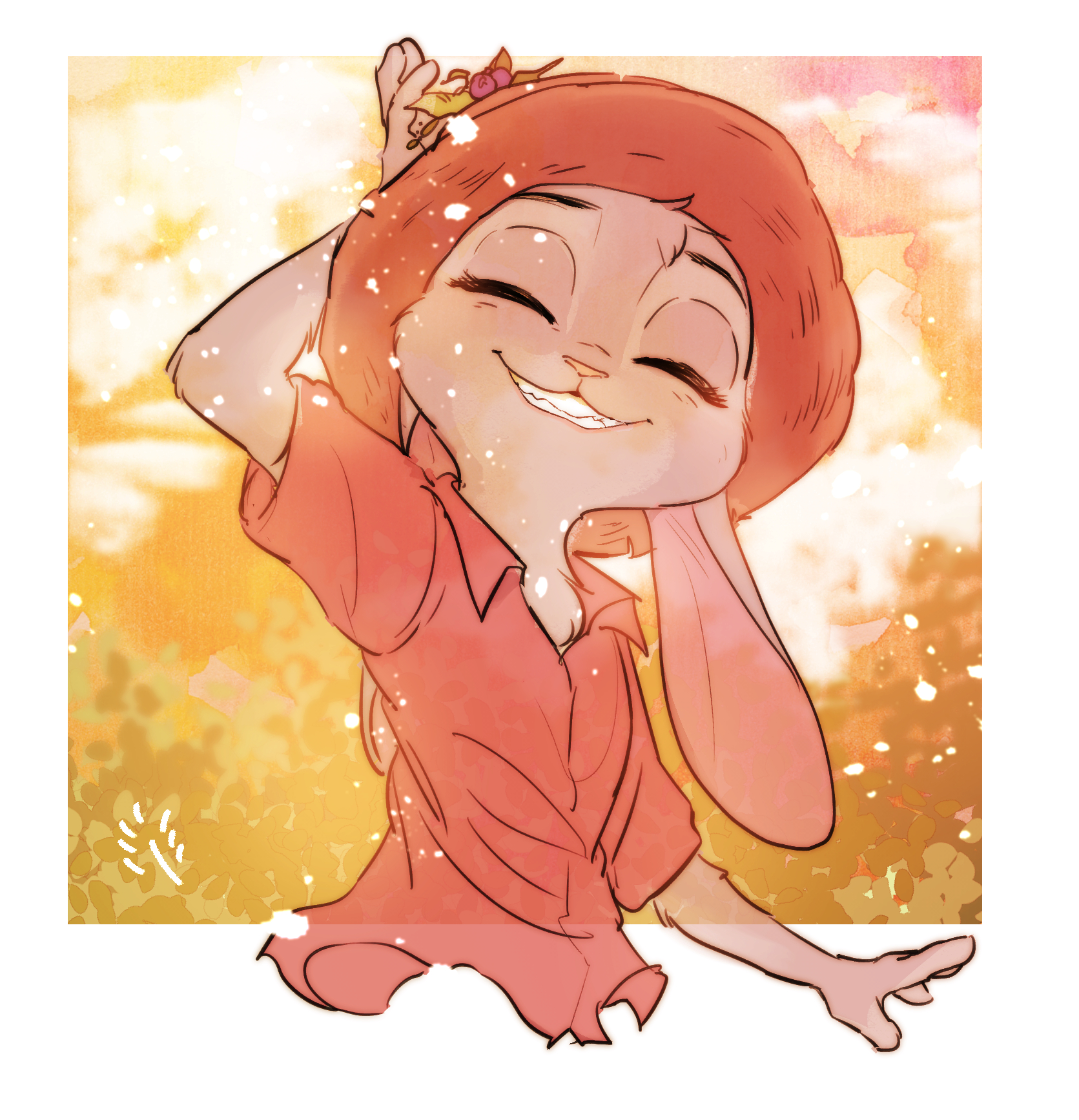 I heard something on the Freakonomics podcast the other week that was fascinating and added a whole new dimension to something in a way I’d never considered (or would even be likely to consider).  It had to do with the notion of individuality at the level of society, ie, whether a particular society was, as a whole, more or less individualistic.  While I’d always envisioned the gradient between (and let’s for the moment not get hung up on these specific terms) individualist and conformist, individualist has it’s own gradient: vertical and horizontal individualism.

In a horizontally individualistic society, people are encouraged to define themselves, seek independence, be expressed, value privacy, and be creative.

In a vertically individualistic society, the above is true, but (and this is the big but), they are very competitive in their individualism.

Which is fascinating!  And opens up new avenues of exploration and mindfulness.  As a hidden context it would shape our experience and views and behaviour in all sorts of ways.**  Just to start, it would seem that the constant comparing and jockeying for position would create an equal and continual sense of instability and insecurity… the game is always on, and we have to be ready to play it at any time.

I always love getting a new lens and angle to see both new things and see things newly.  I’m know there’s plenty more to discover, and I’m keen on what will open up and what I’ll see out of exploring this distinction.  Even more so for the barriers I can put aside towards greater connection and peace of mind.

* Right down to the practice of religion, which, given the tenets of certain religions, is rather contrary…

** As this is a societal distinction, there are also some strong outcomes across the society, where the more vertical individualistic the society is, the more inequity and hardship there is, and the poorer the commons.

So while looking at the subject of last week’s post, I noticed this: 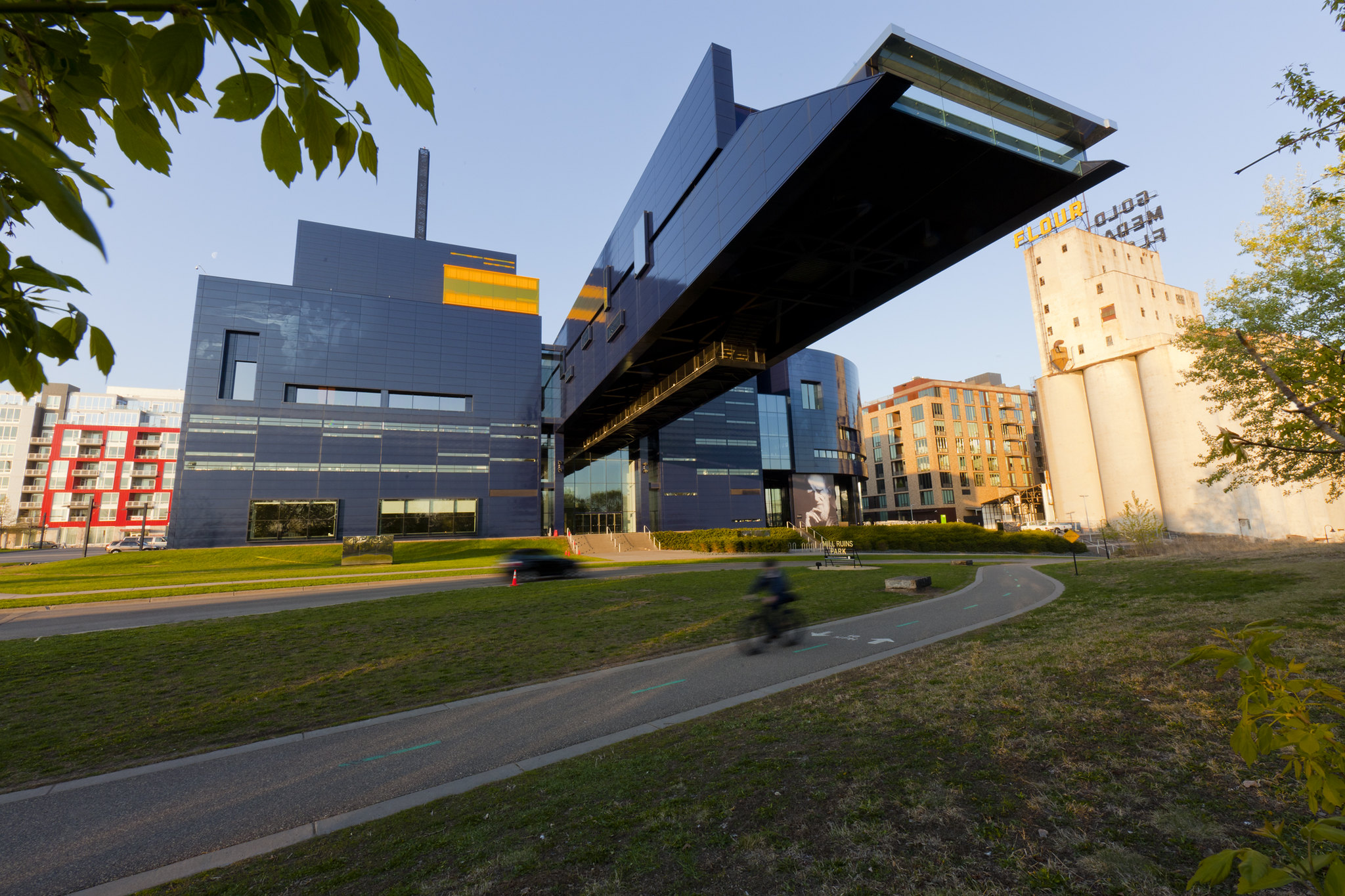 Attached to a performing arts centre, the prominent protuberance is known as the Endless Bridge and is used as a gallery, event space, and observatory.

The rest of the building is pretty spiff as well, an assemblage of bold forms upon which subtle (less so at night) images have been printed right onto the panels. 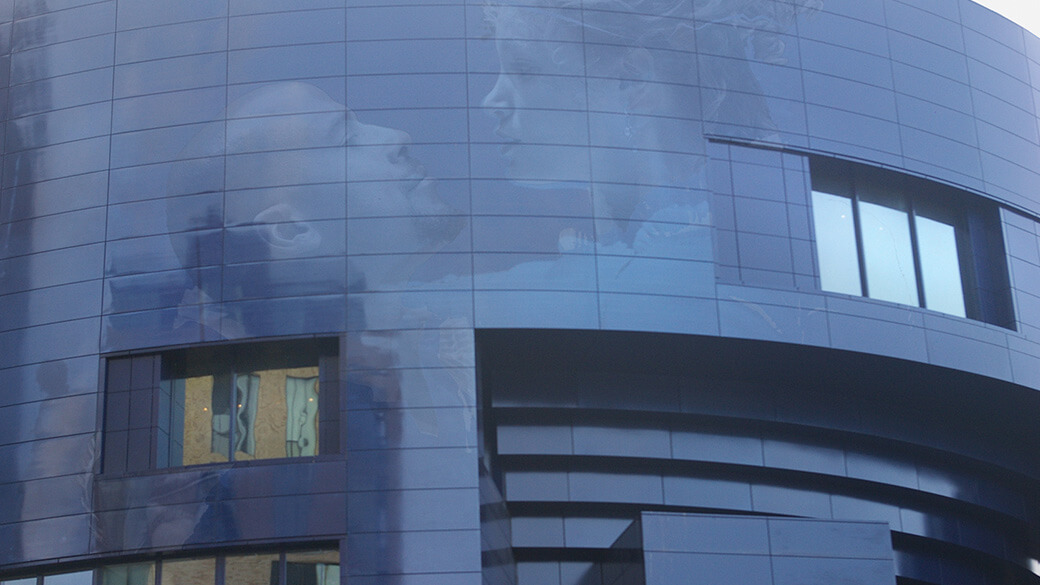 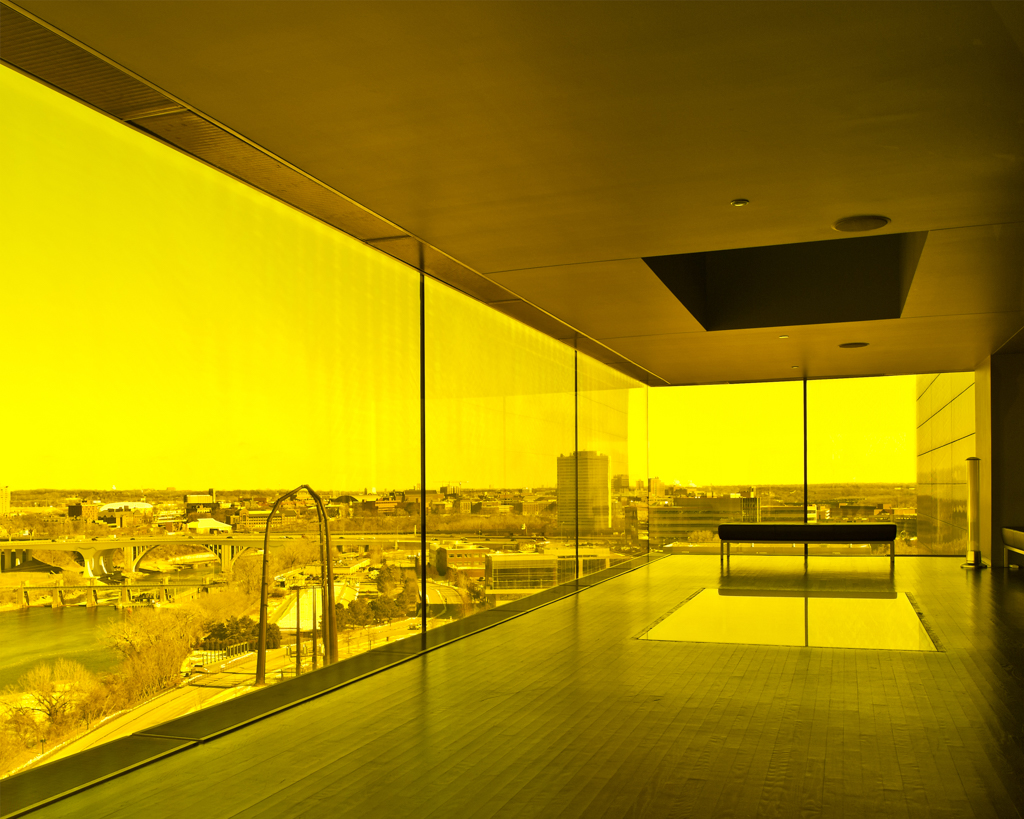 The main theatre is pretty cool too, with an asymmetrical thrust stage and hyper colourful seating:

Nifty and expressive, and a cool contrast to the old silos of the Mill Center. Very cool! 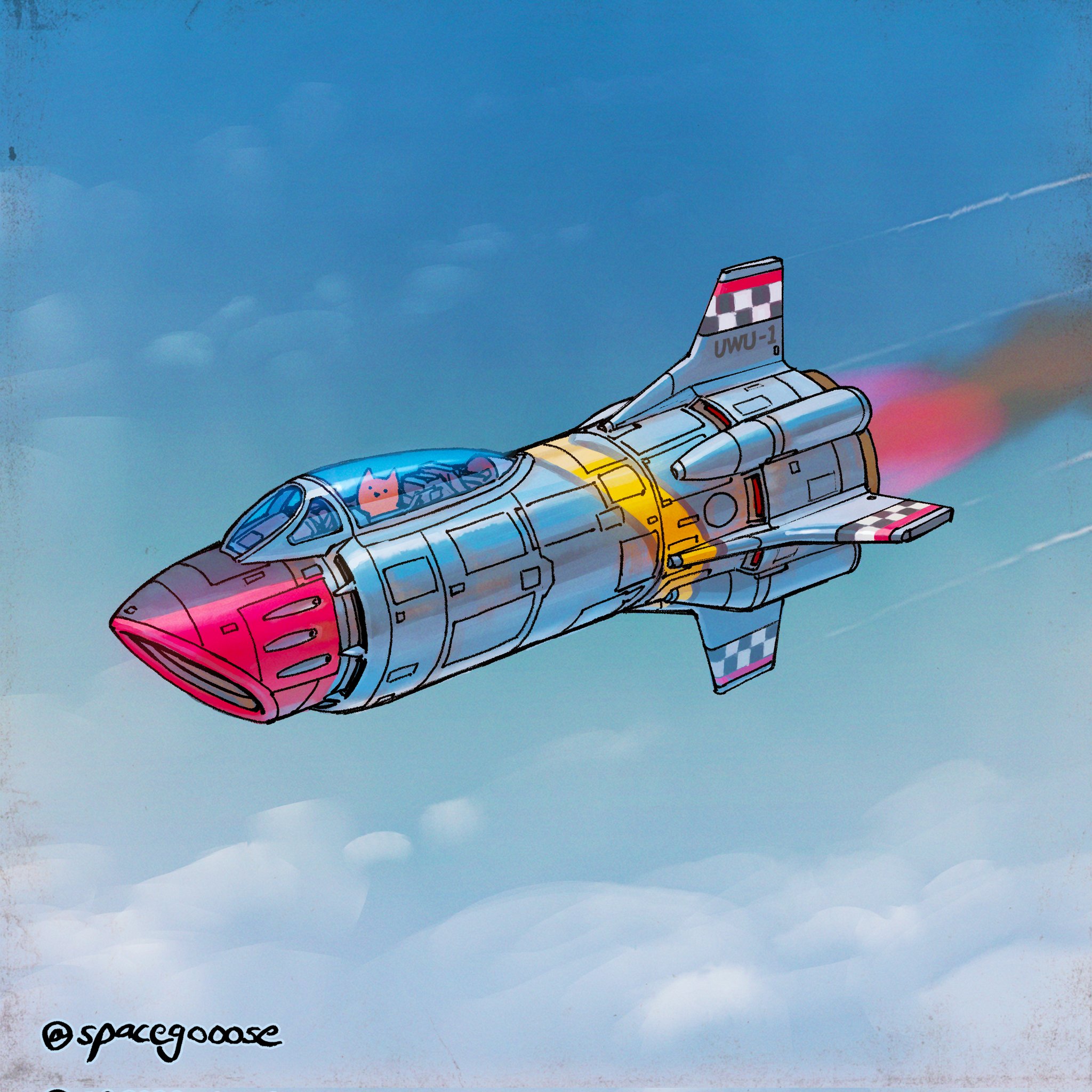 File this one as an expansion of “Yesterday’s Transformation is Today’s Ego Trip.”  Because while philosophy and ontological concepts and insights can create great openings and oodles of possibility for us and those around us, when our identities and world views are challenged, these critical tools can also be repurposed.  Rather than being mindful and doing the work and practice to remove our blind spots and barriers using our transformational knowledge, our calculating selves can instead pull a switcharoo and instead wield them as a weapon against that which challenges our world views and “truths.”

It’s paradoxical, perhaps, but the very same transformational knowledge is used instead to try and annihilate the incoming information, and it does so in the most efficient way possible:  by tying into our unrivaled capacity to be dismissive.

We turn our deep philosophical understanding (and groking) into dismissal missiles.

It’s foolproof, really.  With our smugness and certainty into our awareness of these concepts, we can brush away any incoming flak as just others falling for those traps.  “Yes, yes, it’s not us who has the blind spot; it’s clearly them.” *

As it turns out, no.  Anytime we’re engaging dismissiveness we’re not being mindful, present, or engaging with what’s so.  We’re not being aware and sage; we’re being resistant. And, in a way, we’re not even there – our authentic self is not in the driver’s seat.

* The one I see most often is once people begin to understand the concept of Cognitive Dissonance (understand, not necessarily get or grok it).  Maybe it’s because CD is widely disseminated and easy to come across, and so by default it is most prevalent, but it otherwise seems especially prominent as a tool to shut down and dismiss someone else.  And then be used by that same originator over and over and over and over… (and I’ve never seen someone stop, realize, and say, “Wow, there’s so much CD going on, I wonder where I’m being susceptible to and falling prey to it?”) 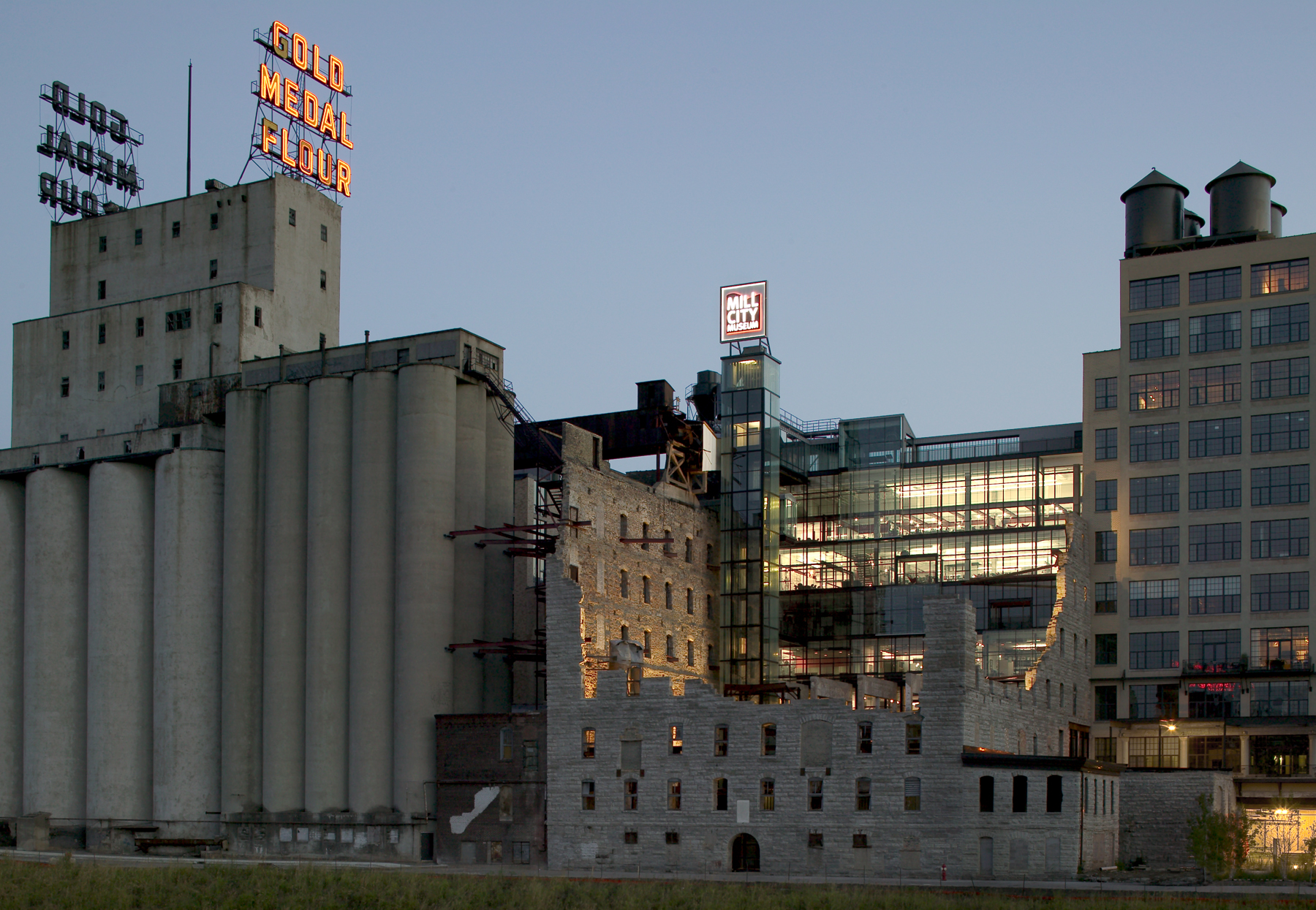 An old flour mill on your industrial waterfront, dormant for 25 years, catches fire and partially collapses.  You could knock that hulk down and wipe your hands of the affair.  Or… you could stabilize the ruins and do some adaptive reuse magic to turn it into the forecourt of a new museum!

As you can guess, that’s exactly what happened with the Mill City Museum. 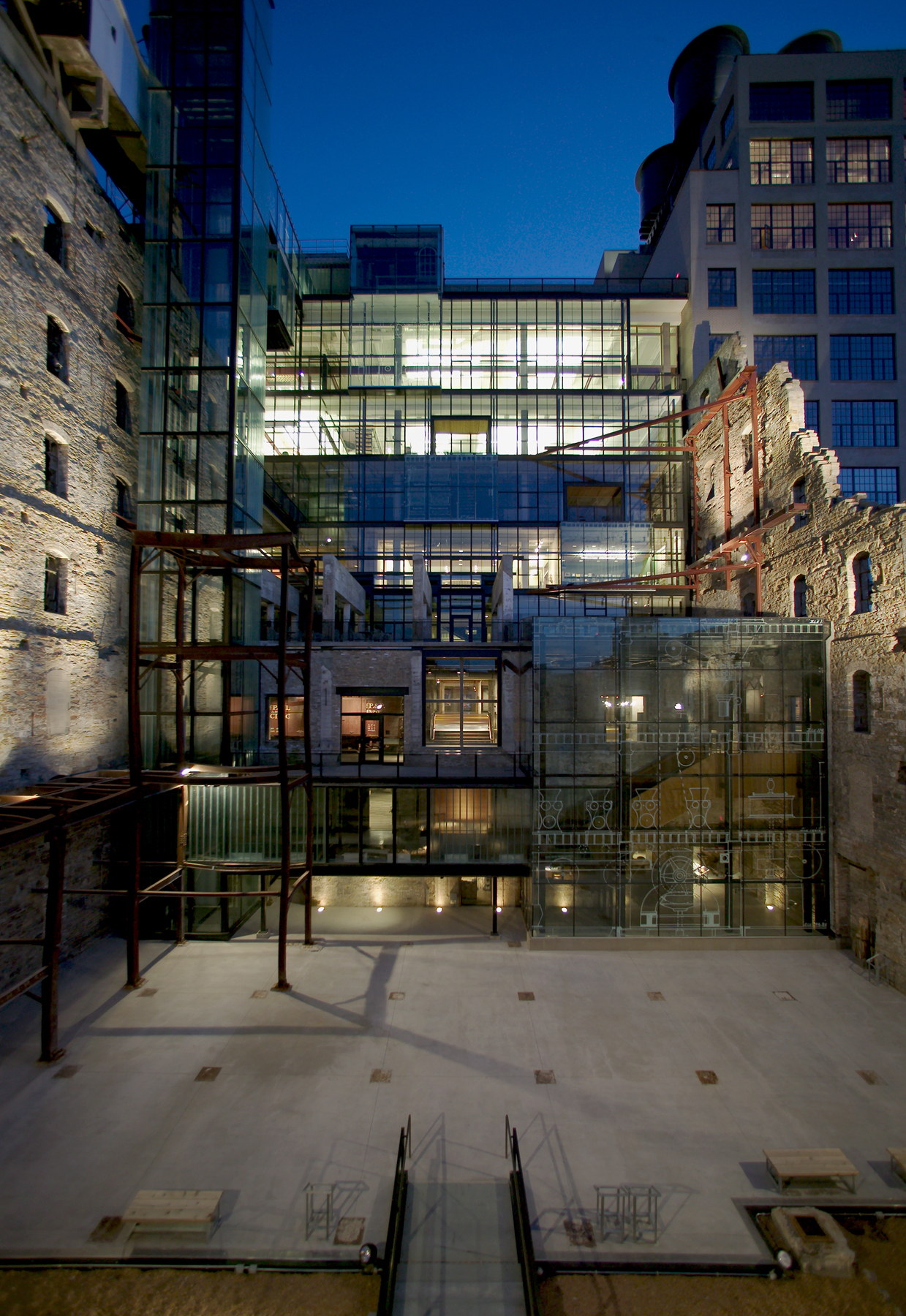 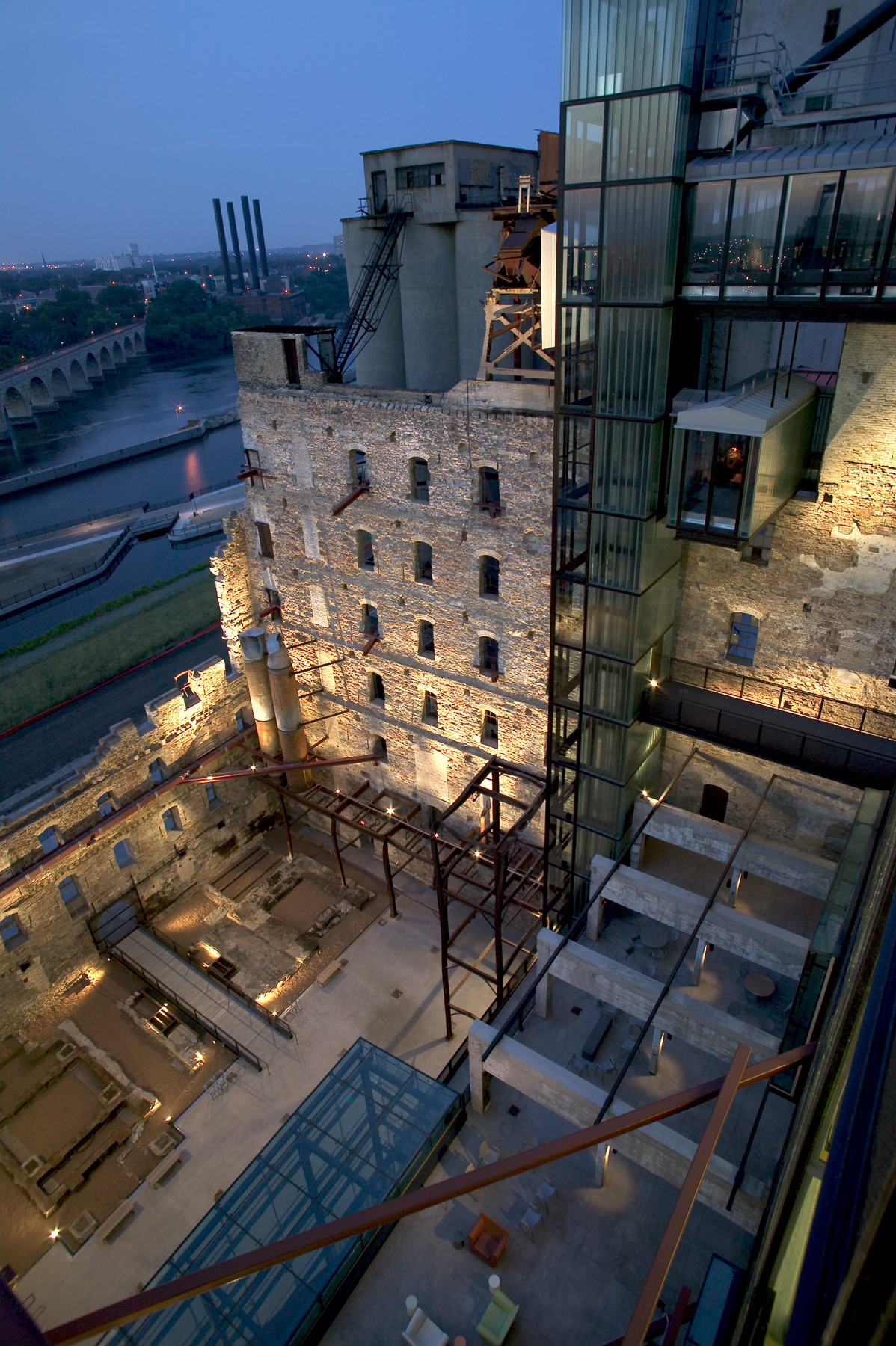 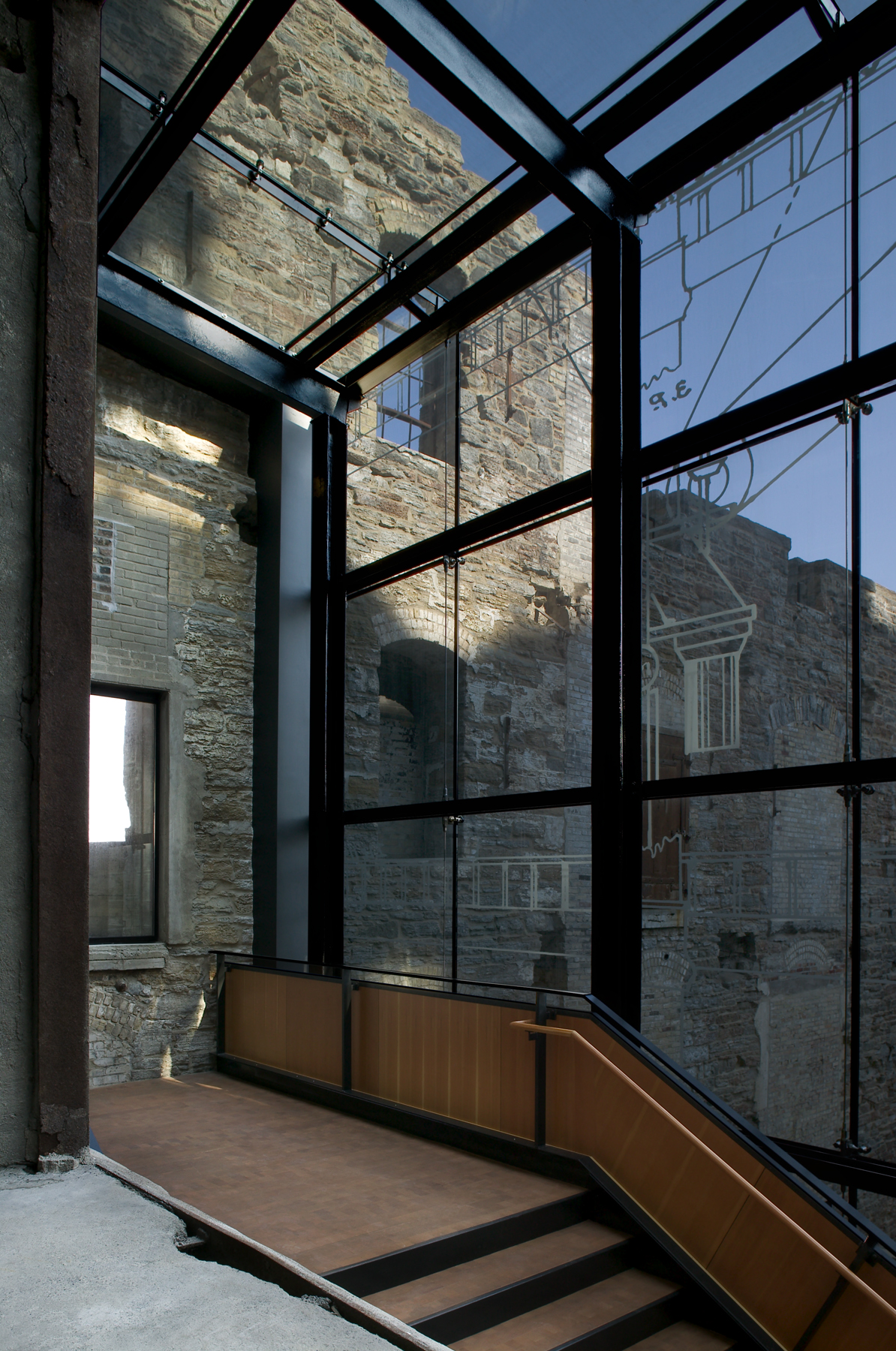 And that forecourt is indeed some magic.  Ruins often manage to be compelling in some ways that is hard to pin down (I’d venture it’s a combination of the roughness, the randomness, and the precariousness, in conjunction with the perfection that is our imagination that completes what is missing), and here the shell acts like the outer concourse of the Coliseum.  The slick glass and steel addition contrasts beautifully with it, and all that glass lets it be a part of the museum experience within so that the history you’re learning about is ever present. 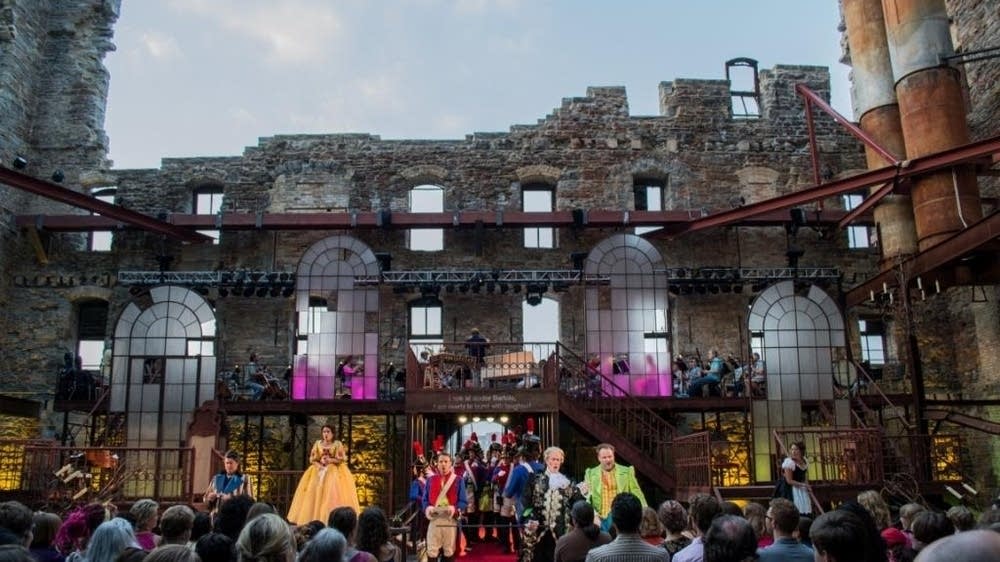 Best of all, the forecourt makes one heck of a backdrop for all sorts of events!  Beyond just being a museum, it creates a whole plethora of possibilities for a reinvented waterfront district.

Given how much I love adaptive reuse, and the rich texture of old brick and rough and tumble buildings in particular, it’s no surprise that I totally dig this.  Great work!