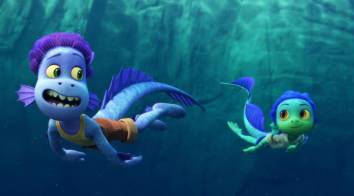 I’ve read various reviews that decry that Luca isn’t as ambitious as other Pixar films, or that it plays it safe, and because of that it is somehow lacking. While, yes, it may not be as fanciful or as high concept as many of their other films, I don’t think that should be held as a knock against Luca. A simple tale, told well, and that touches deeply is still a damn good story. It needn’t be anything else. For instance, Miyazaki’s My Neighbour Totoro is a simple and fanciful tale in which nothing really happens. (Seriously, the plot can be summed up as “Two girls move with their father to the countryside to be closer to their sick mother. They meet some forest spirits. Later, the forest spirits help them reunite when one gets lost.”) But that doesn’t mean it isn’t an amazing and even profound story about the experience of being a child in the face of uncertainty. It’s masterful work.

And that comparison to Miyazaki is apt here, as he was an inspiration to the creators of this movie. Luca is also a straightforward tale that touches on the heartfelt depths of our human experience(es). If we want to get fancy and erudite (and I do!), Luca is a story about the liminal. The sea-monster-coming-onto-land is a metaphor that is teased throughout to speak of transitions, especially the transitions between childhood and adolescence and adulthood. It is about discovery and finding ourselves… and then finding ourselves yet again as we discover something new. It’s about how we grow and yet how we still say the same (in a good way). And above all, it is a story about friendship, and how our friendships might shift yet remain strong. There is a lot here that is very moving.

Plus, the sea-monster coming onto land also works double time to dive into the experience of those of us who find ourselves as an ‘other’ in the world, be it 2SLGBTQIA+ or race or culture or interests or moving to a new town/country or so much more. There’s a great universality there.

Best of all, the story is, on the whole, told quite well. I found it delightful to watch, with moments of joy and wonder and thrill and heartache and possibility. At just a fin over ninety minutes in length, it swims quickly without feeling rushed.

It goes without saying at this point that Pixar’s animation is on point here, with gorgeous water and environments and effortless character animation. Their typical human design here, however, is nicely departed from, and many of the characters in Luca have perhaps an almost Charles Schulz-like roundness to them. The music was appropriately playful and uplifting. And the Italian influence was a nice touch – perhaps bordering a bit on the cliché at times, but still done with a deftness of a director who is themselves Italian.

I rate Lucah as a Good Minus! I enjoyed it aplenty and love its depth wrapped within its straightforward tale (tail?). Nice work by Pixar, and well worth seeing.