As mentioned last week, I’ve been digging through the Cortex Prime ruleset.  We’ve been using it in a narrative-forward campaign that was originally conceived and played in the FATE ruleset.  So far it’s been going well, and I’ve discovered a few things that I prefer within Cortex.  For starters, nearly every test in Cortex involves/includes one of the character’s Distinction in the pool, whereas in FATE a character’s Aspects (essentially the same as a Distinction) only come into play if you spend a Fate Point.  While the latter might be more dramatically highlighting, outside of those Point spends there’s less to distinguish one character’s skill or approach or flavour from another.  By including a Distinction with every test, however, a character’s flair and flavour is likewise included and reinforced.  Another neat bit is how, by leveraging Cortex’s unusual die mechanics, there are several slick ways that can be used to resolve different kinds challenges or encounters or situations.  There’s a streamlined way to run obstacles or swarms or large-scale events, a way to craft interesting one-on-one contests, and another that allows for tracked action/reaction encounters.  Each unique yet still tied to the same mechanics, and each of them are evocative and allow for plenty of player creativity that highlights a character’s schtick and personality.  Lastly (for this post), there are slightly more reminders and perhaps incentive to invoke against yourself and therefore keep the meta currency economy flowing.*

Even with all the neat stuff in Cortex, however, there are some features of FATE that I do find missing within the base Cortex Prime ruleset, especially around the larger and more impactful narrative-altering use of Aspects and Fate Point spends.  Hmmm… why not take those ideas/concepts and incorporate them into the Cortex experience?

And lo, the Cortex of FATE mod was born! 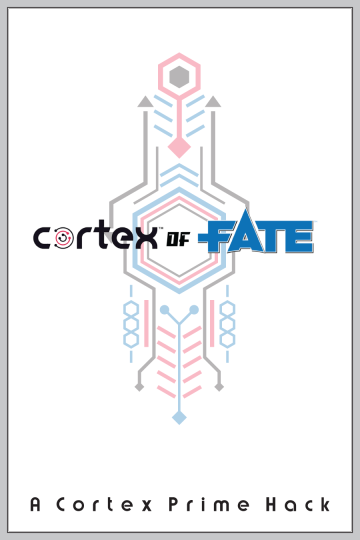 To be clear, this is not an attempt to model or reproduce FATE within Cortex Prime – even using this mod the game still plays and feels like Cortex.  Instead, the additions are intended to enhance the narrative oomph of a campaign, primarily by adding additional uses for Distinctions and Plot Points and by porting over Approaches as a new Prime Set.  All in all, the goal is to entice greater storytelling opportunities.

We’ve been playtesting these mods in our Broken Lands campaign and thus far they’ve been working great.  If this piques your interest check it out, and I hope they help fuel wondrous and engaging stories for all those around your table.

* To be complete here, let me mention that I find there are also some downsides with the interesting dice mechanics.  Beyond the one I already spoke of last week, the principal issue is that in building a pool mechanic that both a) uses so many different die types as well as b) adding only two of them together to determine the result, it becomes quite difficult to get a grasp of the probabilities and outcomes.  This can be especially acute for the GM to set difficulties; if the base is 2d8 difficulty, how much harder does it make it if you add a d6 to the mix?  Or for players, is it better to go with a pool of 1d6|2d8|1d10, or a pool of 1d6|4d8?  With the d10, the former certainly allows for potentially greater success, both in a higher total as well as in choice of effect die, but will the latter, with its higher number of dice, equate to a higher average roll and thus higher chance of at least marginal success?  It gets worse when you realize that both the GM and the Player is rolling each time, with no static target numbers, and each with pools of dice that might be different each time… it will take a while to get a feel for “power levels”.