Though I’ve posted about it a bunch, including reminiscing about my earliest visits when the park was still young, I hadn’t actually visited Canada’s Wonderland since 1995 or so.  But a few weeks ago I got a chance to do just that!  Visiting home during the more summerly months there was no way I wasn’t going to go and see what was new… and, of course, ride every coaster I could as often as I could.  DO NOT STAND UP! END_OF_DOCUMENT_TOKEN_TO_BE_REPLACED

Oh glorious day!  The scourge of banal renaming at Canada’s Wonderland is coming to an end!  Once more, will Wilde Knight Mares, Wilde Beast, Dragon Fyre, and the Canterbury Theatre grace the land of Medieval Faire.  I can only hope that the themeing and paint jobs are also brought up to their full grandeur.

Now if only they’d return the Spinnovator (UGH!) back to Quixotie’s Kettles…

To celebrate, here are some great photos from Wonderland’s first season, all from the Toronto Archives: 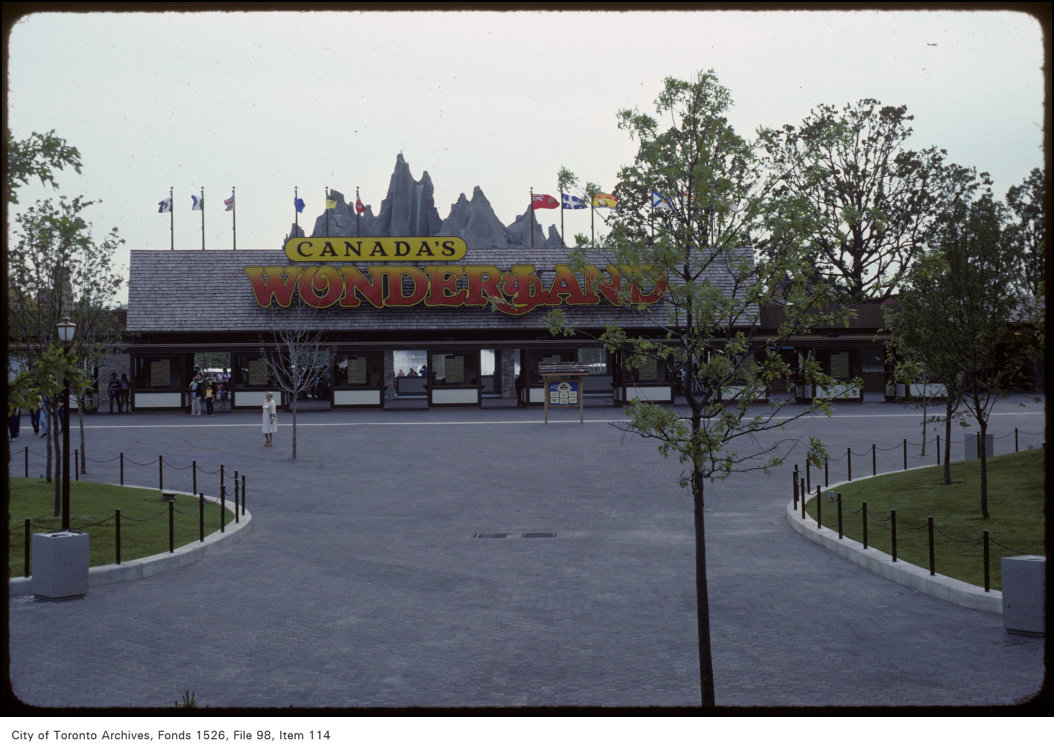 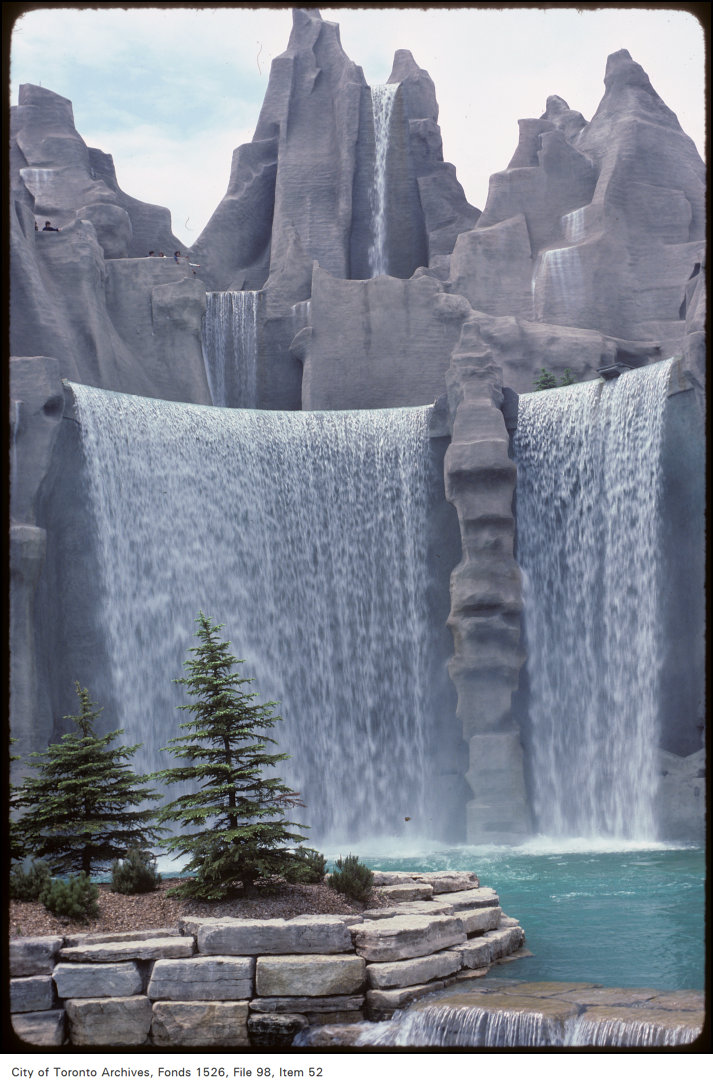 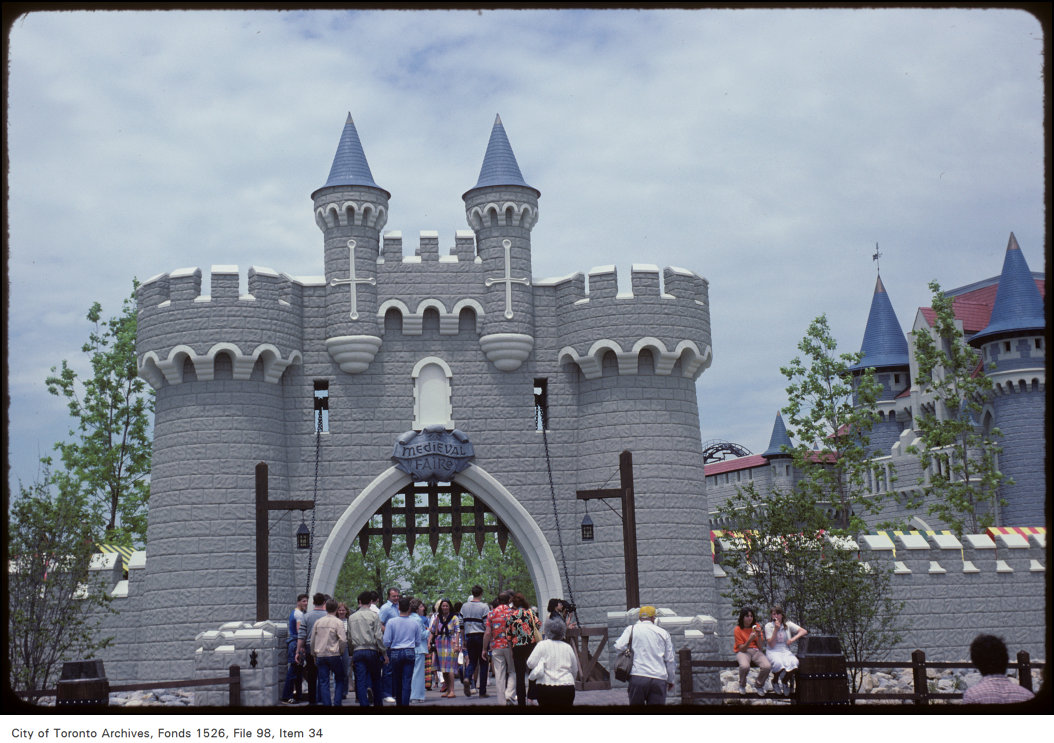 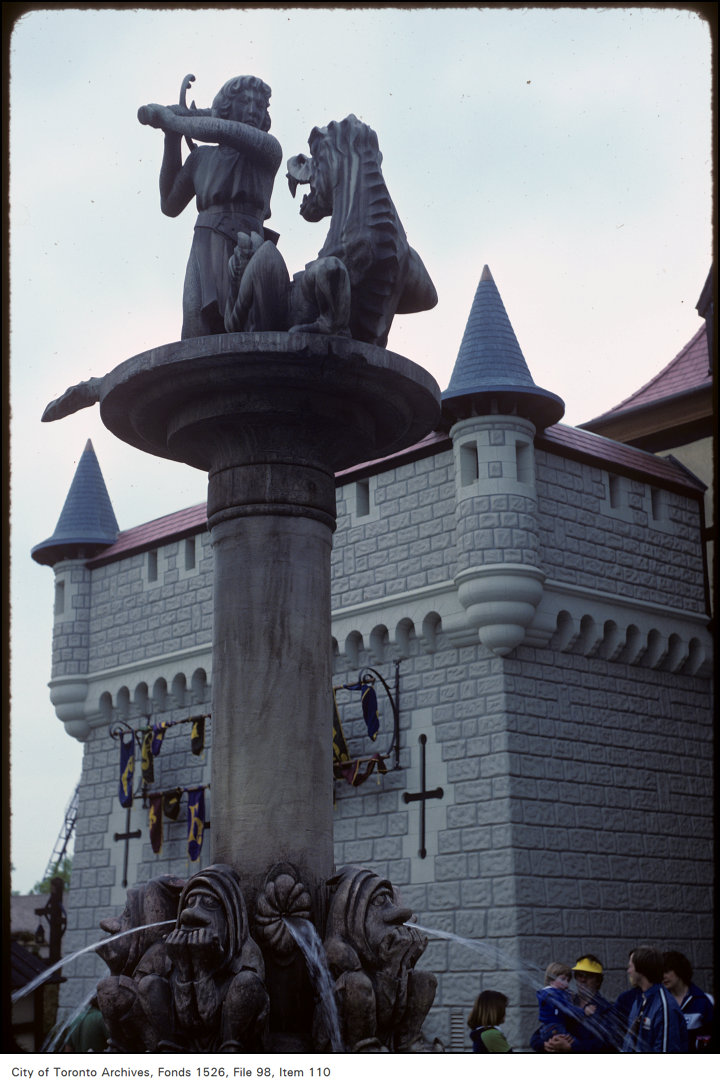 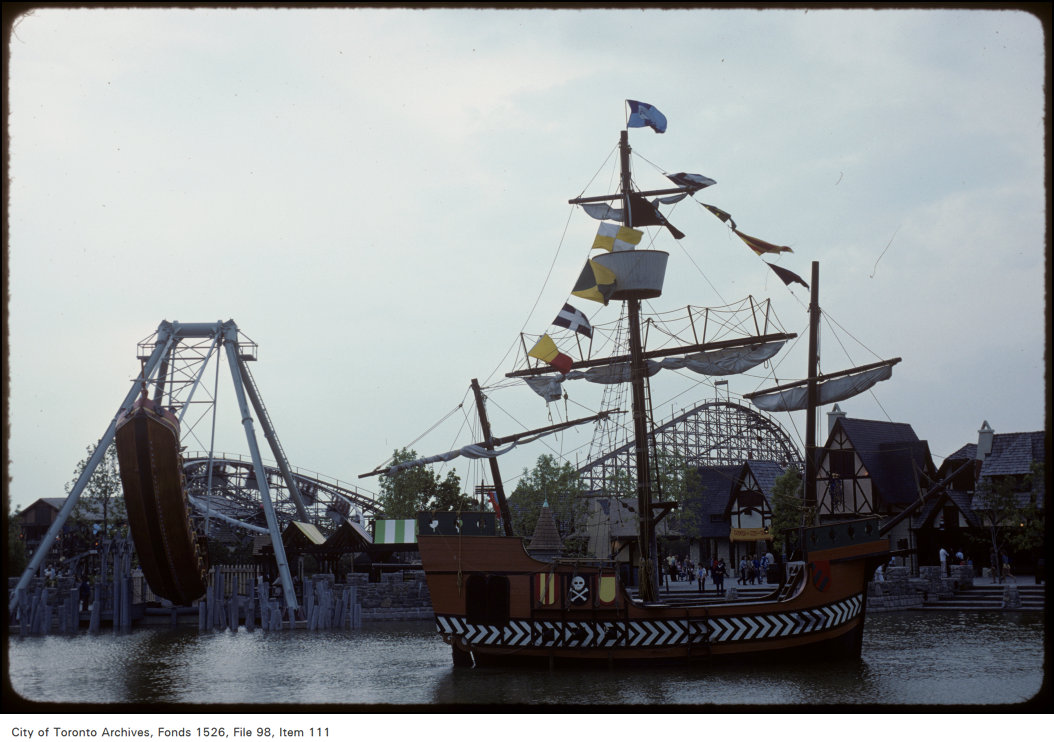 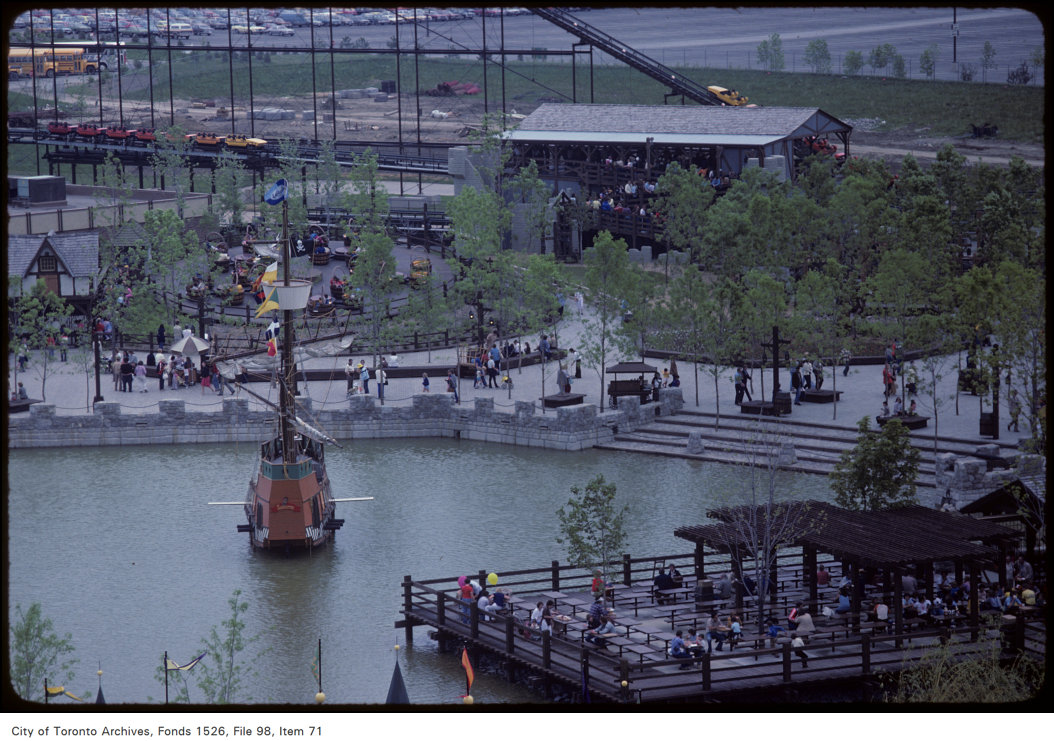 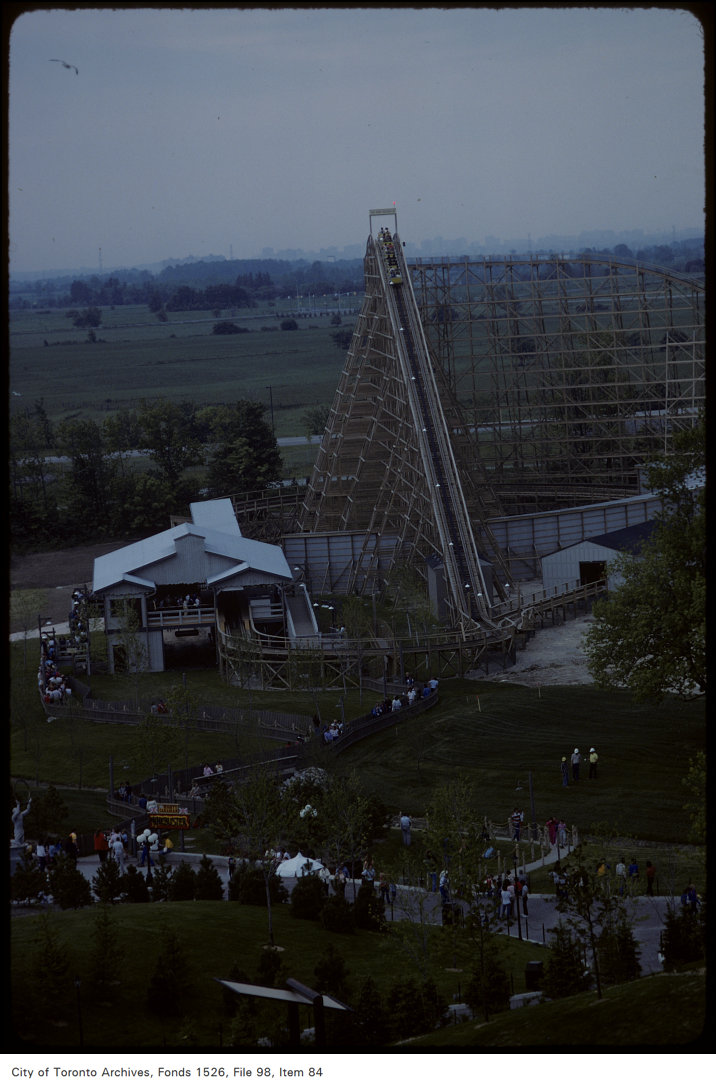 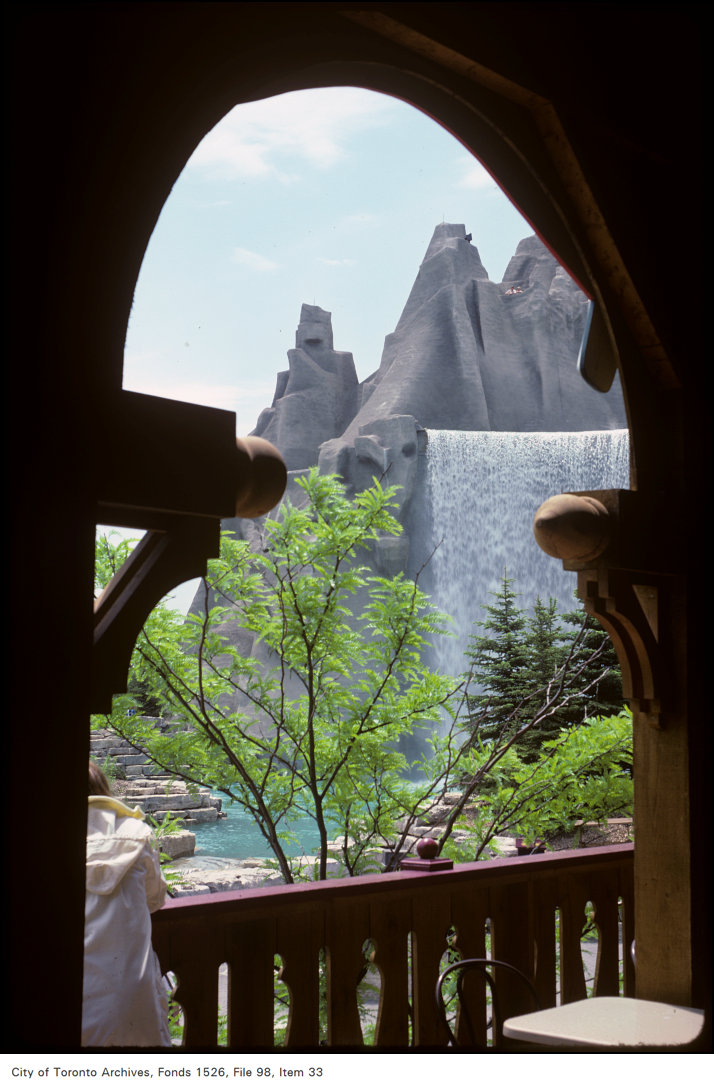 A few superlatives there, including tallest and fastest dive coaster, but beyond that it’s seems to have a nice swooping layout that includes a gaggle inversions.  I think it’s nifty how the coaster intersects with (the great!) Vortex; that and the water should make for a memorable first drop — well, even more memorable given the 90 degree incline with stare-down time!  Alas, like most of the coasters at Wonderland, it’s a short one.

Looking at the off-ride view, though, are… some of those inversions taller than the mountain?  Egads!  As I noted before, back in the early days (and my younger years) that mountain seemed TOWERING, it still feels so strange to me to have it now being lorded over by several of the coasters.

Overall this is looking like a good add.  It’s still been years since I’ve visited the park, so this is another good push for me to try and get out there again!

I just discovered a roller coaster named Taron that resides in a German amusement park (Phantasialand).  And it.  Looks.  Awesome:

Why so awesome?  It’s a launched coaster, yes (double launched, in fact!).  It looks quick and twisty and the track is a magnificent pretzel of pretzelness all over itself.  But above, and 1000% beyond that, is  the themeing, and moreover, the glorious way the train interacts with this themeing.  The twisting around, through, over, and behind all the buildings, cliffs, and water features, with near misses and inches away and hovering overs.  It’s inseparable.

When I was envisioning my replacement for Canada’s Wonderland’s (that’s… awkward to type) Dragon Fyre, this is pretty much EXACTLY the kind of thing I was thinking of.*  Throw on some inversions, and stretch the track out longer (I hadn’t envisioned it quite so pretzel-y, but having some good pretzel areas would let it be longer!), end it with the waterfall trick, and you have just what I wanted.  A launched coaster that interacts with its fabulously themed environment.

Phantasialand overall is a spectacularly themed park.  It seems nearly all of their rides are not just simple isolated affairs, they’re all deliciously integrated into themed areas, be they indoors, through terrain, or some combination therein.  Case in point, their inverted coaster is a perfect example of how to make an inverted coaster extra amazing, with a great lift hill and all these near misses and knee/head/arm/etc scraping moments along the way:

Their flume ride, their mountain train ride, their drop rides, their river rides, all crazily well themed.  Heck, one of their tamer coasters even has you going over some convincing rope bridges!

Such a delight to see a park (beyond Disney) taking themeing so seriously and making it such an integral part of their park, and using that themeing to take their rides into extra levels of excitement and wickednes.  I so want to go visit now!

* Well, I had indicated it to be hydraulically launched, but LSMs have come a long way and it’s a much better launch tech now.  Plus, as with Taron, you can get a second boost to make the latter half of the ride even more exhilarating than the first!

The plaque for my beloved Wilde Beaste!*

* Yes, that will forever be the spelling for me!

** And yes, it is supposed to be that rough.  That’s what makes it great old school woodie!