I’ve been practicing the Northern Shaolin Dragon Movement Jian form for 15 years or so.  Just this week, I had a breakthrough on one of the movements, discovering a new way of performing it that brought new linking and ability.

I absolutely love this about the art.

Yes!  After much intense writing and wrangling, Volume 2 of the Northern Shaolin Kung Fu series that I co-wrote with my Sifu is now available for all!

As before, I might be a bit biased*, but this book is a fabulous addition to your Kung Fu library, whether you practice Northern Shaolin or not.  There is so much great insight and wisdom from my Sifu that has been distilled into this tome, covering Northern Shaolin’s advanced concepts, the generation of internal power (and what that even means), the principles of application and fighting, the exploration of all ten of the core Northern Shaolin hand forms, a multitude of advanced weapons, and even more.  Coming in at 50% larger than the first volume, this thing is packed with great stuff!

You can order your own copy (and check out Sifu Lam’s other great books as well) here:

I am thrilled (tempered with the trepidation with something so personal being released for all to see) to have the book released to the world.  After nearly 20 years of practice I still love the art, and this book is stuffed with everything I could think of from all that I’ve learned from Sifu and from what I’ve gleaned through all that diligent practice.  I worked closely with Sifu to gather the material for the book and get it captured for posterity before he passed.  This is most definitively part of his legacy, and I am humbled to be able to be a part of it.  I hope it illuminates and teaches, and I hope that our passion for the art and – even more so – for sharing the art comes through its many pages.

* And as before, natch, I am very biased since I wrote it… 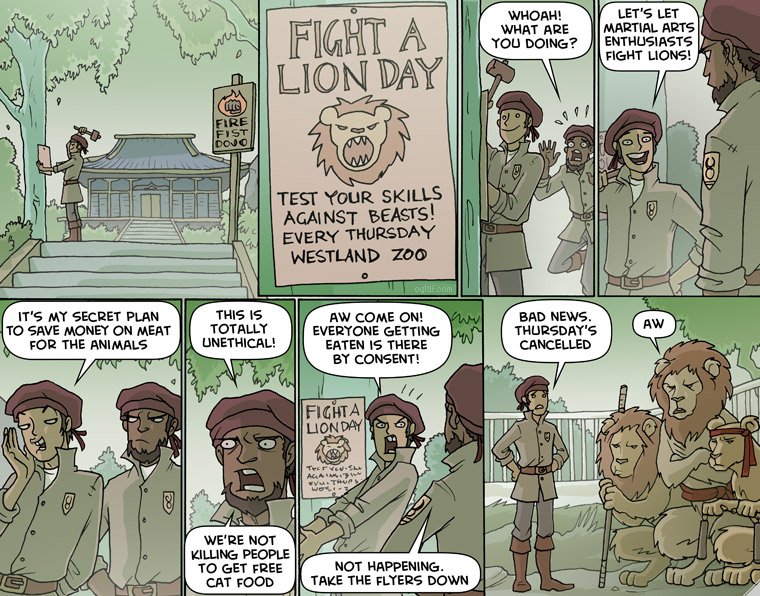 No surprise I’m sure, but I absolutely love that last panel.  You don’t want to mess with that lioness! 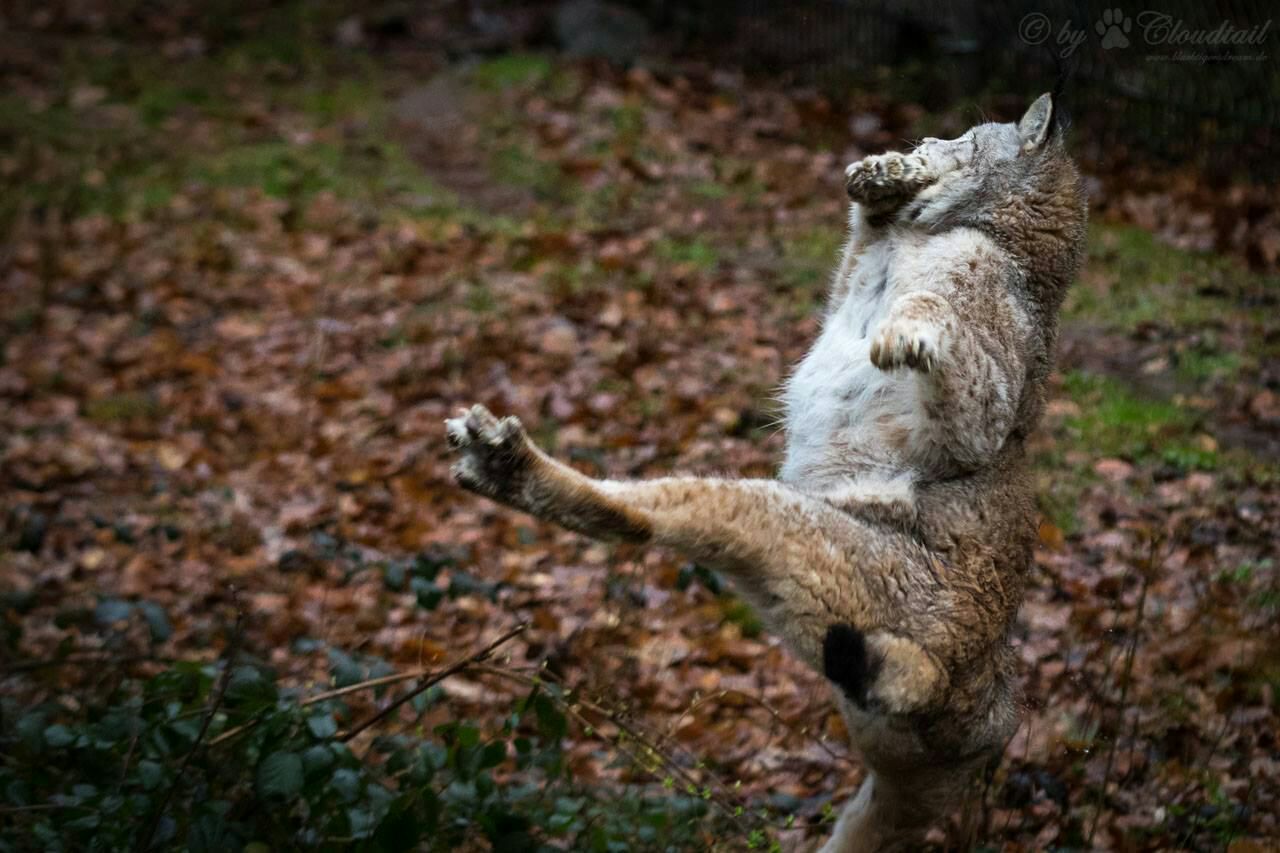 The spear is the third weapon taught in Northern Shaolin kung fu.  Before you begin learning the set proper, there is a basic drill to practice that familiarizes you with the feel of the weapon as well as ingraining an effective and basic technique.  It’s three motions:  circular snap to parry by your leg, circular snap to press onto the opponent’s hand, stab forward to the full extension of the spear.  Pull back, and repeat.

“Now, practice it 100 times a day,” Sifu instructed.  When Jay learned the drill, he was way more eager than that.  “I’m going to practice a ton, get good real fast.”  And so he’d go into the kwoon to practice well before class, he’d practice after class, practice on days he didn’t have class.  Any moment he had.  Swoop, press, stab.  Swoop, press stab.

Several weeks later while Jay was practicing in the kwoon, Sifu walked by and noticed that his form was really suffering.  The movements were slow, the trajectory all off, and the energy all erratic.  “You seem to be regressing,” he called out.  Jay could only nod unhappily.  “Yes Sifu, I don’t know what it is.  I’m practicing, but it’s just not getting better.”

“Let me see your left hand,” asked Sifu.  Jay held it out.  The web of flesh between his thumb and index finger looked as though someone had attacked it with a belt sander, all raw and split and bloody.  “How much have you been practicing?”

A silence hung in the air.  Sifu looked from Jay back down to his bloody hand then back up at Jay again.  He mock smacked him upside the head.  “That’s why I said 100 times a day!”

I will never forget the first time I learned that Sifu knew my name.

I had only been at the school for several months.  I hadn’t really interacted with Sifu at all – I knew who he was to be sure, and I saluted him as he passed, but to that point all my class time was with his bevy of instructors.  As it was, several instructors could not make it that evening, so Sifu was gathered with those that were there, working to ensure everyone was taken care of.  “Well, Oliver is learning Tan Tuy right now…”  Inwardly, my head whipped around.  I was, shall we say, rather high strung back then…  “He knows my name… how could he know my name?  Is that a good thing?  What’s going on? Is this bad???“

It wasn’t.  Not in the slightest.

But above all, he loved to teach and was always ready to give willing of his time to share what he knew.  Once, on one of those trips to China, while we the tour participants were practicing with the local master I looked over to see Sifu chatting with a stranger.  Not five minutes later, the stranger was in a stance and Sifu was proffering explanations and suggestions.  He was that eager.  Kung fu was his passion in life, and he expressed it fully.

Of course, there are many words that can be used to describe Sifu.  Rigorous:  Sifu never rested on his laurels with “this is how things are, this is what I remember, this is how this art is done,” he was always testing, exploring, relearning, and deepening his understanding of every art he learned.  Resourceful:  Sifu managed to make a living in the Bay Area through his love of the martial arts, without having to compromise the principles of the art.  Renaissance Man:  Sifu was skilled way beyond just the martial arts, teaching himself to be a weaponsmith, a tui na and herbalist healer, author, video producer, carpenter, businessman, real estate agent, and father.  Peaceful:  Sifu lived his life with equanimity and faced things as they were.  Devilishly witty:  Sifu could break out an astute little twist or cutting yet loving phrase or instruction at unexpected moments.  Humble:  Sifu didn’t like attention or speeches, he just wanted to practice and grow.  Industrious, fastidious, inventive, curious… I could go on.

Sifu was a genuine martial artist, interested in the art side of things as much as the martial.  He studied diligently and delved deep into the heart of several styles to discover their deepest roots and concepts.  He wouldn’t recite answers from memory:  ask him a question, and it he would generate it from first principles.  Ask him in a year, and his answer may shift as he grew his understanding.  He always knew exactly what to give you that would improve your form; never more, never less.  And it was all delivered without attitude.  He never sought the limelight, he never gated his teachings, he never compared himself to others.  He was at where he was at, always walking the path.

Through his school, through his store, through his videos, through his books, and through his disciples and instructors and through their students in turn, Sifu touched the lives of thousands.  I count myself extremely lucky to have – pretty much by accident – found my way to his school eighteen years ago and gotten the chance to know him.   He has been a major part of my entire adult life.   I will cherish all the lessons he taught me, both in the martial arts and in how to be a great human being.  I will strive to honour those lessons and his memory, practicing with equal passion and sharing that passion with equal generosity.  I will carry on his legacy, in whatever ways I can.

Grandmaster Wing Lam passed away this morning.  The world has lost a treasure.  I will miss him dearly, as will we all.

Thank you Sifu, for everything.

And with a last bit of typing, the first draft of the next book is complete!  Considering how long it took for the previous book to get to this stage, I call this quite the improvement…

Onward to round two and editing, expounding, clarifying, cleaning up, and wordsmithifiying!

“Slouching is not the same as arching.”  — Sifu Lam

(I am totally guilty on that last one… )

Judy, Nick, and I showing off our kung fu martial arts training!

As you can see, Judy has adopted a rear weighted stance, distracting and guarding with her paws, leaving her ready for a powerful front kick with those amazing bunny legs.

Nick is using the soft paws technique.  It requires great sensitivity, leading the opponent to overreach with overconfidence while you subtly lead them off balance and off-centre for a follow up.

(Nick was a bit reluctant to demonstrate this technique – I think he wanted to keep it secret.  Judy, however, was totally gung ho and leapt into pose almost immediately.)

It was really great to get to meet and hug and play around a bit with Officer Hopps and undercover Officer Wilde.  Much love!

And more to come…

If I may engage in a bit of shameless self promotion for a moment… my book is out! After a number of years of hard work, I hold in my hands Volume 1 of the Northern Shaolin Kung Fu series that I am co-writing with my Sifu.

I may be a bit biased*, but this is a Kung Fu book you want to add to your collection, whether you are a practitioner of Northern Shaolin or not. There is a tonne of great information within, including core principles and concepts of body structure and efficiency, the fundamentals of the art, a discussion on the three fundamental skills of any martial art (and for most physical arts), the seasons of training, the mindset of practice, illustrations of the two introductory hand forms, and exploration of the four basic weapons, from their history and lore to their use. It’s chock full of good stuff!

You can order your own copy here:

You can also supplement this with Sifu’s other great books on Hung Gar, Ha Say Fu Hung Gar, and Iron Palm…

I am giddy and nervous and excited all at the same time that the book is now out. It’s a labour of love, and I’ve released it into the wild. I hope it illuminates and teaches, and I hope that my passion for the art and for sharing the art comes through its pages.